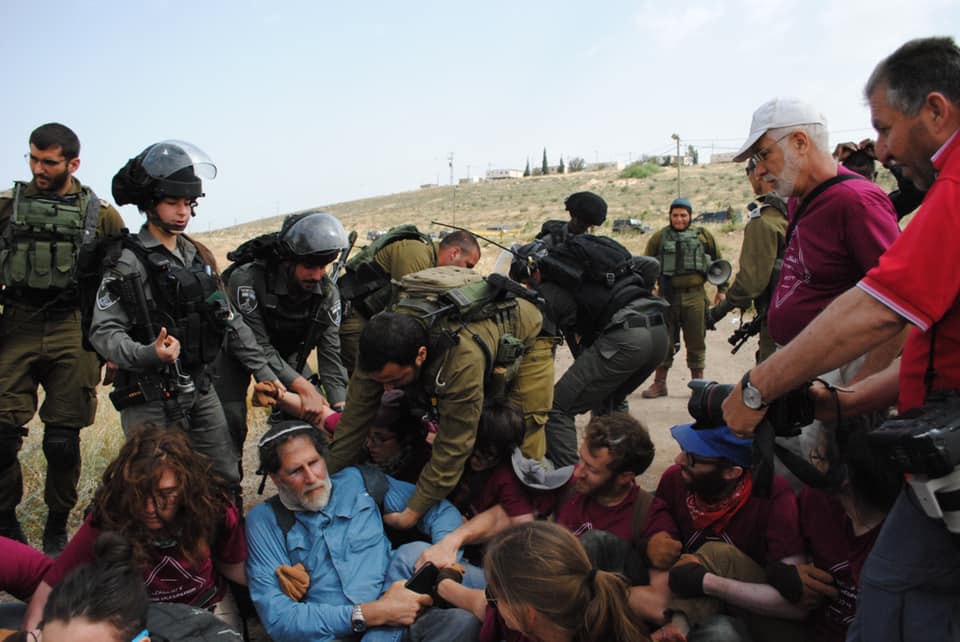 South Hebron Hills, West Bank, occupied Palestinian territory–Rabbi David Mivasair of Hamilton, Ontario, was detained by the Israeli military this morning along with several other Canadians. 17 people were detained in total, including Palestinians, Israelis, fellow North American Jews, and other international activists.

Rabbi Mivasair, who is an active member of Independent Jewish Voices, is there taking part in a 10-day delegation along with over 50 North American Jews, organized by the Center for Jewish Nonviolence. The arrest took place as the group was participating in a project to rehabilitate a crucial access road for Palestinian villages in the South Hebron Hills region of the West Bank.

The villages of the South Hebron Hills are often the targets of violence by Israeli settlers and of demolitions by the Israeli military. Just this week, several home-demolitions have taken place and more are expected in the weeks and months to come. The villages notably lie in Area C, an area that takes up approximately 60% of the Israeli-occupied West Bank and is under full Israeli military control. Palestinians in Area C require permits from Israeli authorities for any construction or land rehabilitation work, to which they are systematically denied. Meanwhile, Jewish-only settlements, which also have their own roads, continue to expand.

Nidal Younes, Head of Masafer Yatta Council, said, “Rehabilitating this road is an important factor in stopping the expansion of the settlements, resisting the occupation and confiscation of more land, and ensuring humanitarian needs are met. When these roads are maintained, families have access to basic resources, like water and food. Rehabilitating this land is also our way of resistance, by making the process of annexation of these lands and confiscation more difficult.”

After approximately an hour of road work, the Israeli army arrived on the scene, declared it a “closed military zone” and soon began arresting participants, beginning with the Palestinians. The participants were violently grabbed and dragged along the rocky road to military vehicles, where they were eventually taken to a nearby police station in the Israeli settlement of Kiryat Arba.

As of 10pm, all detainees, including Rabbi Mivasair, had been released. Upon his release, Rabbi Mivasair made a short video over Facebook Live, which you can watch on the Independent Jewish Voices Facebook page here.

For more information about this incident, please see this media release by the various Palestinian, Israeli and international partners working in partnership on the ground. For ongoing updates from the delegation follow @CJNVtweets on Twitter.