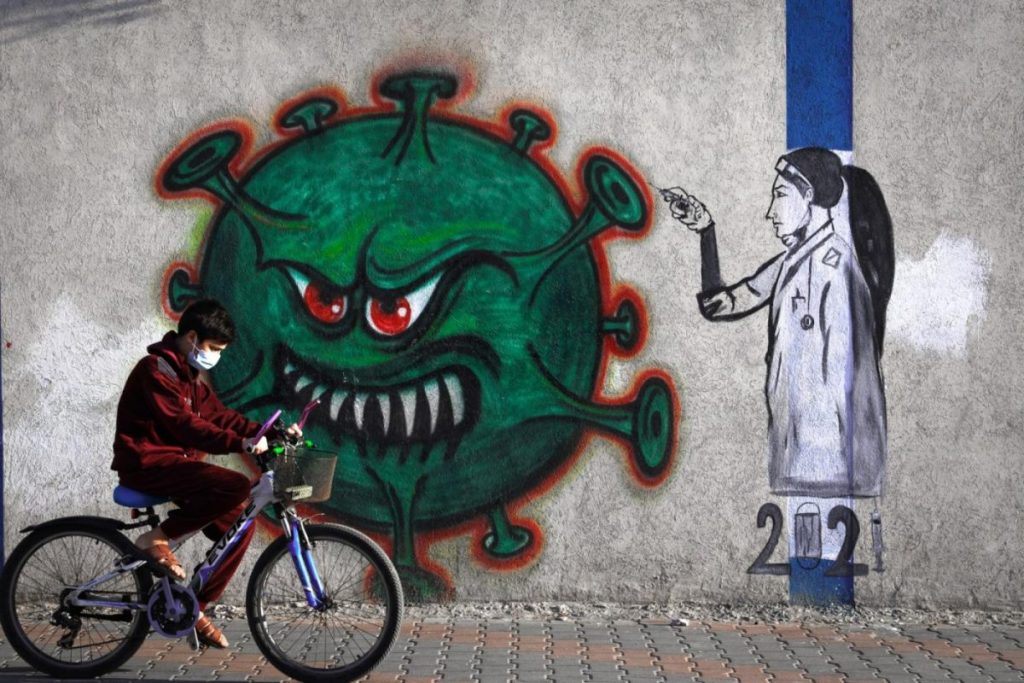 (A Palestinian youth wearing a face mask rides his bicycle past a mural painting of a nurse injecting a vaccine to a COVID-19 virus in Gaza City, on 31 December 2020. Photo credit: AFP)

On January 3rd, NDP MP for Timmins-James Bay, Charlie Angus, shared an article from The Guardian focusing on Israel’s COVID-19 vaccine program, and its failure to provide the vaccine to Palestinians living under Israeli occupation. Angus tweeted the article with the comment “This is appalling. #apartheidstate”. Leah Gazan, NDP MP for Winnipeg Centre, followed suit by sharing the same article that day, further calling out Israel’s discriminatory vaccine rollout.

Pro-Israel lobby groups B’nai Brith Canada and the Centre for Israel and Jewish Affairs (CIJA) were quick to attack both Angus and Gazan. Both organizations cited misleading information in their attacks, suggesting that Israel does not hold responsibility for the health of Palestinians under Israeli occupation in the West Bank and Gaza Strip.

B’nai Brith Canada went even further, calling Angus’ tweet antisemitic, and accusing him of spreading conspiracy theories. Gila Martow, Member of Ontario’s parliament for Thornhill, threw herself into the fight too, tweeting that Angus’ comment justifies why Ontario adopted the dangerously misleading IHRA antisemitism definition. And perhaps most disturbing of all, a top Israeli diplomat to Canada, Ohad Nakash Kaynar, also threw himself into the pile-on, accusing Angus of antisemitism based on the IHRA definition.

On Wednesday, IJV co-signed a letter to NDP leader Jagmeet Singh, refuting claims by pro-Israel lobby groups that absolve Israel of responsibility and urging the NDP in turn to denounce Israel’s discriminatory vaccine program. IJV also sent an email to Angus and Gazan to congratulate them on their tweets and to contest the false accusations of antisemitism being slung at Angus.

As IJV and a growing chorus of civil society organizations and academics both in Canada and around the world have been warning, the promotion of the IHRA antisemitism definition has very little to do with fighting genuine antisemitism and much to do with shielding Israel from criticism and protest. The fact that pro-Israel lobby groups, Israeli diplomats and certain politicians in Canada are using the IHRA definition to bully politicians like Angus who dare object to Israel’s violations of international law therefore comes as no surprise. If these actors put as much effort into demanding an equitable vaccine rollout in Israel-Palestine as they have into making false accusations of antisemitism, it would ultimately be for the public health benefit of both peoples in the region.

Since the beginning of the pandemic, Palestinians have been warning the world about the disastrous potential of a deadly virus inside the longest-running military occupation in modern history. Weeam Hammoudeh, a professor and researcher in public health at Birzeit University, reminded us that the Israeli occupation has been degrading the Palestinian health system for decades, which has made it much more difficult for Palestinians to manage the COVID-19 pandemic. Just like at the beginning of the pandemic, the world must listen to the voices of Palestinians under occupation, and act to prevent the worst outcomes for the virus in Palestine. IJV will continue to stand with Palestinians, and to amplify their voices to ensure rapid and fair vaccine access for all.