From Occupation to Apartheid: UN Special Rapporteur Michael Lynk on his latest report 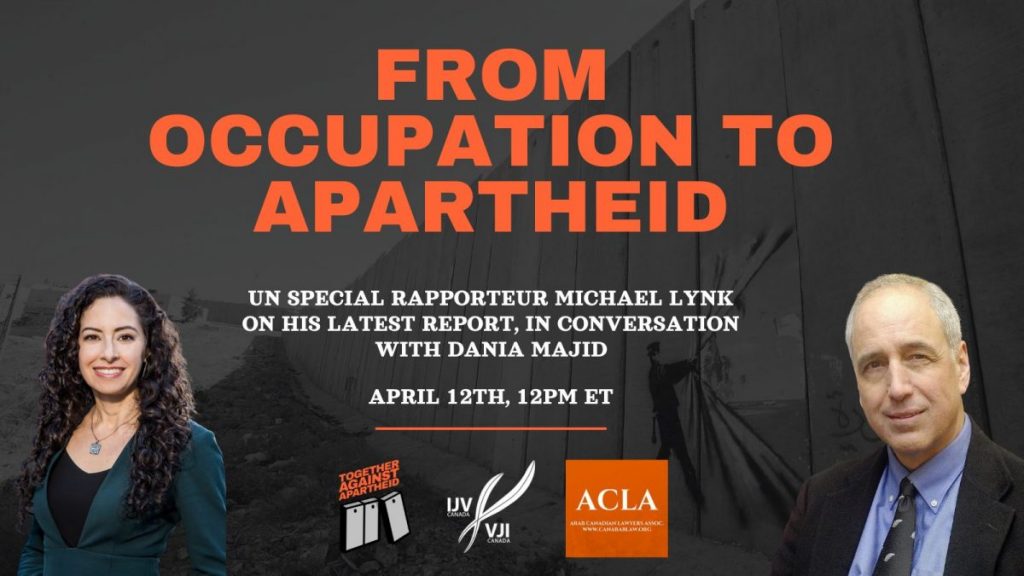 “With the eyes of the international community wide open, Israel has imposed upon Palestine an apartheid reality in a post-apartheid world.”

Join us on Tuesday, April 12, 9am PT / 12pm ET for an exclusive conversation with United Nations Special Rapporteur on the occupied Palestinian territory and Canadian human rights expert Michael Lynk. Professor Lynk will be interviewed by Dania Majid, co-founder and president of the Arab Canadian Lawyers Association, on the subject of his latest report as UN Special Rapporteur, which accuses Israel of committing the international crime of apartheid.

This event is a co-presentation of Independent Jewish Voices (IJV) Canada and the Arab Canadian Lawyers Association (ACLA), and is part of IJV’s Together Against Apartheid campaign.

Michael Lynk was appointed Special Rapporteur on the situation of human rights in the Palestinian Territory occupied since 1967 in 2016. He is Associate Professor of Law at Western University in London, Ontario, where he teaches labour law, constitutional law and human rights law. Professor Lynk has written widely on labour law and human rights issues in Canada, and he has also published articles on the application of international law to the Middle East conflict. Professor Lynk received his B.A. (with honours) and his LL.B. from Dalhousie University, and completed his LL.M. at Queen’s University in 2001.

Dania Majid is the co-founder and president of the Arab Canadian Lawyers Association. She is also the co-founder and artistic director of the Toronto Palestine Film Festival. Dania sits on the steering committee for the Hearing Palestine program at the University of Toronto. In addition to being a long-time advocate for the Palestinian and Arab community, Dania is also a human rights lawyer and housing advocate with a legal aid clinic in Ontario. Dania completed her Hon. B.Sc. at the University of Toronto before completing her MES/LLB at York University/Osgoode Hall.