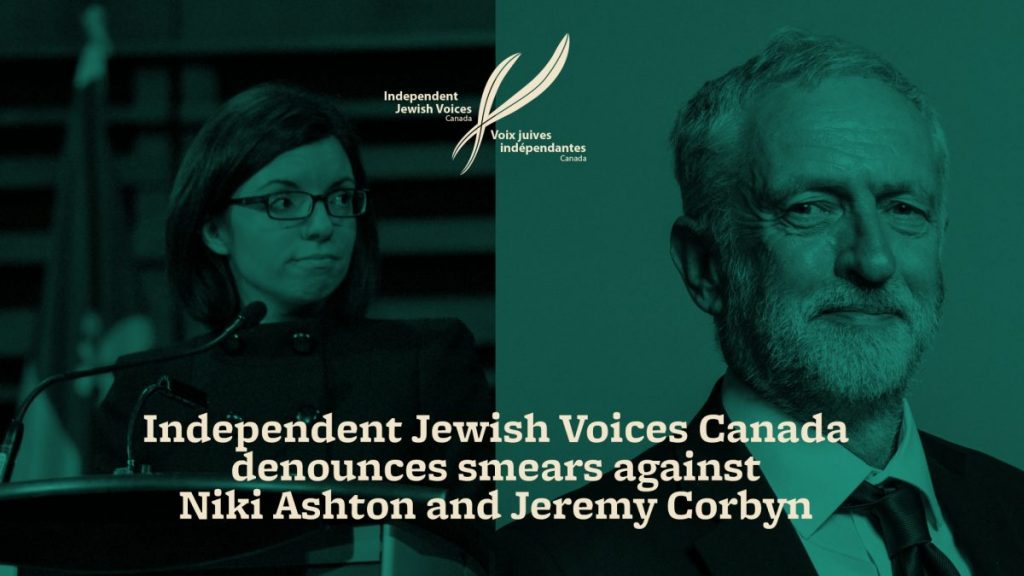 March 4, 2021 – Independent Jewish Voices Canada (IJV) denounces the brazen attempt by the Centre for Israel and Jewish Affairs (CIJA) to smear NDP MP Niki Ashton in relation to an upcoming online event with former UK Labour Party Leader Jeremy Corbyn. As an organization representing Canadian progressive Jews from coast to coast, we feel that it is important for Canadians to be able to hear directly from Corbyn and Ashton, who will be speaking on a range of important social justice issues that are close to the hearts of many in this country.

Ashton’s event with Corbyn, hosted by Progressive International and scheduled for March 20th, is focused on fighting racism, climate catastrophe, and the COVID-19 crisis, both in Canada and abroad. Progressive International was co-founded by two prominent progressive Jews: Bernie Sanders and Naomi Klein. The fact that CIJA would attempt to discredit such an event demonstrates the lengths they will go to to delegitimize progressives such as Ashton and Corbyn, simply because of their support for Palestinian human rights.

“We can disagree on his political platform, but Jeremy Corbyn is no antisemite,” says Corey Balsam, IJV’s national coordinator. “Any serious study of his track record will find that he actually has a long history of standing with Jewish communities in the UK against racism, fascism, and the far-right.”

“A recent report by Israel’s leading human rights organization, B’tselem, found that Israel operates a regime of apartheid over all the territory it controls, including the occupied Palestinian territories,” says Balsam. “For an organization like CIJA, which offers near-blanket support for Israeli atrocities, to turn around and lecture Canadians on ‘progressive values’ is truly the height of hypocrisy.”

Antisemitism is a problem in the UK, as it is in Canada, but there is absolutely no evidence that antisemitism was any worse in the Labour party under Corbyn’s leadership than in any other British political party. Rather than a situation where antisemitism had become “institutionalized within the Labour Party”, there was an orchestrated campaign to attack Corbyn’s political platform which unapologetically stood for Palestinian human rights, anti-racism, and fighting corporate power. All this was done under the guise of fighting antisemitism. A 2018 report by the Media Reform Coalition in the UK found widespread inaccuracies, omissions and distortions among news reporting on the so-called “antisemitism row” within the Labour Party.