Anti-fascist Klezmer From the Shtetl to the Streets 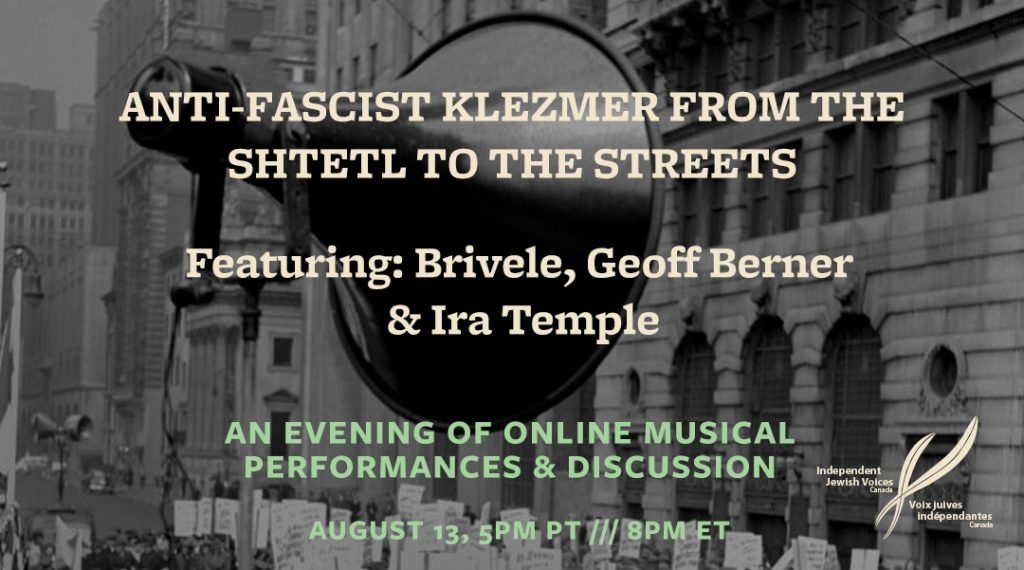 In these times of growing white supremacy, police brutality, and neo-fascism, we need music that rises to the occasion. This summer in particular, we have seen a powerful uprising to these injustices, led by Black, Brown and Indigenous communities. Accordions, violins, clarinets and voices can be some of the most dangerous tools at our disposal to combat injustice. Klezmer has a long tradition of songs that cried out for workers rights, against police brutality, and for a world free from fascism. Today, there is a growing movement of klezmer musicians drawing on that tradition, dusting off the beautiful, tragic, and celebratory songs of old, and re-imagining them for modern times. Come hear from some of the best of them.

Geoff Berner is a Jewish-Canadian accordion player/singer-songwriter/novelist/political agitator who has been travelling the world for the last 15 years or so. He’s played in bars, cafés, festivals, and the occasional stadium. He’s performed in seventeen countries and on national radio in seven of them.

Ira Khonen Temple is a multi-instrumentalist, songwriter, and cultural worker. Recent credits include: accordionist for Fiddler on the Roof in Yiddish, and music director of Indecent at the Weston Playhouse, Great Small Works’ Muntergang and Other Cheerful Downfalls, the Aftselakhis Spectacle Committee Purimshpil, and Zoe Beloff’s Days of the Commune. Ira was a founder of the radical-traditional Yiddish music group Tsibele.