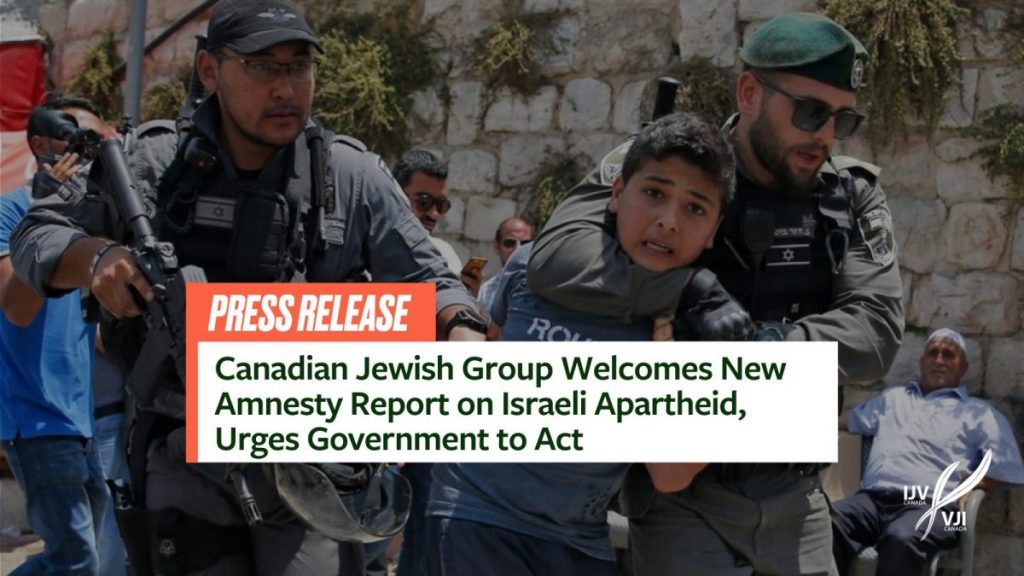 February 1, 2022 – Independent Jewish Voices Canada (IJV) welcomes today’s launch of a major report by Amnesty International, which makes the case with meticulous detail that Israel is committing the internationally-recognized crime of apartheid.  Amnesty International is the third major human rights organization since January 2021 to issue a report announcing it has come to this conclusion. It follows similar reports from US-based Human Rights Watch and the Israeli organization B’Tselem.

“There has been a growing consensus in the global human rights community that Israel’s treatment of Palestinians amounts to apartheid, and Amnesty’s report puts a rubber stamp on it,” says IJV’s Communications and Media Lead Aaron Lakoff. “Israel’s practices of apartheid are consequently becoming more and more evident to Jews around the world,” he says. A poll taken last year by the Jewish Electoral Institute  found that at least a quarter of American Jews agree that Israel is an apartheid state. Also in 2021, a survey of Middle East scholars from various disciplines found that two-thirds agree with the apartheid label.

“Palestinians and Israeli dissidents have been arguing that Israel is practicing apartheid going back several decades,” says Lakoff. “Several former high-level Israeli officials have also agreed that Israel’s practices against Palestinians constitute apartheid, including Michael Benyair, a former Attorney General, and Shulamit Aloni, a former Education Minister. What has changed is that the case is now being made at increasingly high international levels and in more and more concrete legal terms.”

The Israeli Foreign Minister Yair Lapid has expressed anxiety in recent weeks that 2022 will see an intense effort to paint Israel as an apartheid state. Lapid is also leading a well-funded government project to improve Israel’s image on the global stage. In anticipation of these efforts, IJV calls on Canadian government officials to read Amnesty’s report carefully and to come to its own conclusions.

“The evidence is in, and the facts are clear. If government officials read Amnesty’s report, there should be no doubt in their minds that Israel is indeed practicing apartheid. We as Canadian Jews join Amnesty International, Palestinians, and people of conscience around the world in demanding that Canada call it what it is and place sanctions on Israel until it ceases its well-documented practices of apartheid.”