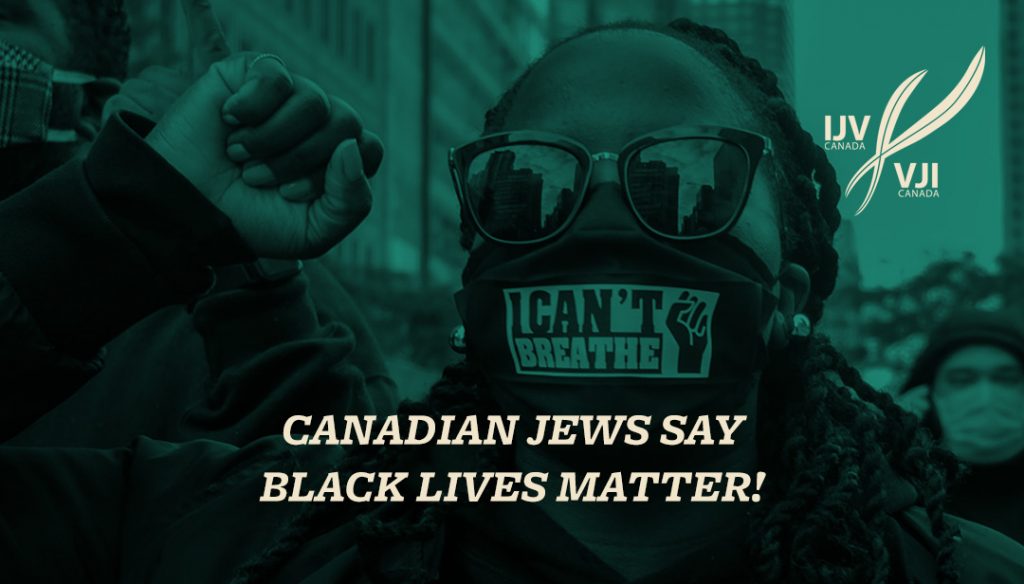 Independent Jewish Voices Canada stands in solidarity with everyone taking part in Black Lives Matter demonstrations against police brutality in cities around the world right now. We join our voices to theirs in demanding justice for the families of all those lost to senseless police violence.

This recent wave of protests was sparked by the grotesque murder of George Floyd in Minneapolis. We stand with Floyd’s family and supporters in Minnesota in demanding that all officers involved in his death be brought to justice.

Here in Canada, we are not immune from problems of police brutality and racism. Just two days after Floyd’s death, Regis Korchinski-Paquet, a 29-year old Afro-Indigenous woman in Toronto lost her life following a police intervention in her apartment. Her family is insisting that the police are responsible for her death, and demanding answers. IJV stands with the family of Korchinski-Paquet. We demand a swift investigation into her death, and that criminal charges be laid on officers involved, should any culpability be found.

As a Jewish organization which fights every day for peace and justice in Israel-Palestine, IJV firmly believes that to stand for a free Palestine means also committing to support movements for Black lives in North America. The very same weapons and tactics used on Palestinian protestors are the ones being turned against Black and other racialized communities in the USA.

In 2005, 32 police chiefs from across Canada travelled to Israel for a training mission sponsored by Israeli police and the Israeli Ministry of Public Security. During that visit, then-York Regional Police Chief Armand LaBarge told Israeli media that he hoped to learn from “Israeli innovations in law enforcement that will promote the safety of their communities”. It is not clear which innovations LaBarge was referring to – firing tear gas canisters directly at protestors perhaps? – but such security cooperation has seemingly only led to more racial terror being inflicted by police in Canada, the USA and Israel.

Tragically, as protests were ramping up in cities across Canada and the USA over the weekend, Israeli police in Jerusalem shot and killed Eyad al-Hallaq, an unarmed 32-year old Palestinian man with autism, as he was walking to his special needs school. Eyad’s killing sparked a night of demonstrations which quickly drew links between police brutality across several continents.

IJV encourages our members and supporters to attend demonstrations under the Black Lives Matter banner happening across Canada. Demonstrations are already being planned in Kitchener-Waterloo on June 3, Winnipeg and Ottawa on June 5, Guelph and London, Ontario on June 6th, Montreal, Sherbrooke and Quebec City on June 7th, and Sarnia, Ontario on June 13th. While organizers of many of these demonstrations are taking health and safety precautions given the situation with COVID-19, we urge everyone going out to these events to wear a mask, and to stay two meters apart.

Every life lost is too many. George Floyd. Regis Korchinski-Paquet. D’Andre Campbell. Eishia Hudson. Pierre Coriolan. And the list goes on. May all their memories be for a blessing. No more police violence and impunity. Jews stand for Black lives!