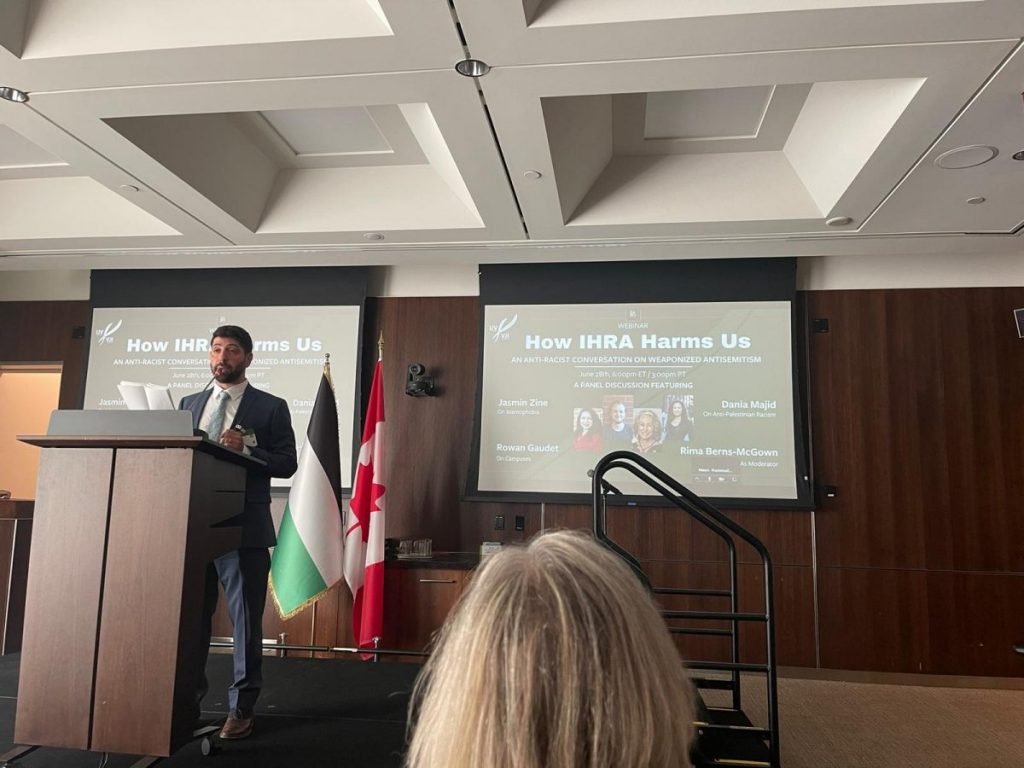 On June 13th of 2022, our National Coordinator Corey Balsam was invited to speak to Canadian parliamentarians at an event hosted by the Canada-Palestine Parliamentary Friendship Group. Below, we reproduce the content of his speech.

I want to sincerely thank the Canada-Palestine Parliamentary Friendship Group and the Coalition of Canadian Palestinian Organizations for bringing this event together and for inviting us to participate. This work of opening up space amongst and with parliamentarians to engage in these important conversations is absolutely crucial. I’m happy to see some familiar faces here as well as some people that I haven’t met before, and am looking forward to continuing to work with all of you to advance Canadian support for Palestinian human rights.

It’s a pleasure for me to be here representing Independent Jewish Voices Canada. Since this is our first official encounter with the friendship group in quite some time, I thought I’d focus my time here on introducing IJV, some of the work we do and some of the positions we take on certain government policies.

Starting with the basics: IJV was founded 14 years ago to provide a platform for Jewish-Canadians to advocate for Palestinian human rights, as Jews. IJV has since become a flourishing organization with chapters in cities and university campuses across the country, about 1200 members in just about every province and territory, and several staff.

IJV is part of a growing segment of the Canadian Jewish community–estimated according to EKOS polls at about a third–that strongly opposes Israel’s treatment of Palestinians. For IJVers and others in our networks, there is no contradiction between being proud Jewish-Canadians and standing in uncompromising solidarity with the Palestinian people. In fact, for many of us doing this work, it is the longstanding Jewish tradition of pursuing justice, and the concept of tikkun olam, mending the world, that helps inspire us and keep us going.

Many of us also see it as a responsibility, given what our families went through, and given the undue privilege attributed to Jewish voice and perspective on this issue. I for one was motivated to get involved in this movement in part on account of hearing my Zaida’s stories of surviving the Nazi concentration camps. The lesson that I and my fellow IJVers, including survivor Suzanne Weiss, learned from this history is that we must come together and take action against governments that deem certain segments of the population under their control as unwanted or disposable. It doesn’t matter if we’re talking about full out genocide, as took place in Nazi Germany, or ethnic cleansing, settler-colonialism and apartheid, which have been taking place in Israel-Palestine, the principle remains the same. Never Again. And, as Jews, we refuse to stand by idly as Israel continues to oppress, murder and displace Palestinians day in and day out, while the international community, including Canada, looks on.

And not only does the Canadian government not act to defend Palestinian lives, it actively works to shield Israel from accountability, be it at the UN General Assembly, the World Health Assembly, vis-à-vis the International Criminal Court, or by adopting and promoting the now broadly discredited IHRA definition of antisemitism, which is being weaponized the world over to silence supporters of Palestinian human rights.

As a Jewish organization that is invested both in the important fight against antisemitism and in the movement for Palestinian liberation, we have taken this latter issue very seriously. In 2019, we launched a national NoIHRA campaign to raise awareness about the problems with the IHRA definition and the manner by which it is being instrumentalized to shut down legitimate speech that is critical of Israel.

In case you have any lingering doubt, allow me to clearly state that suggesting that Israel is praticing apartheid, as Amnesty International, Human Rights Watch and virtually the entirety of the Israeli and global human rights communities agree, is not antisemitic – despite what the IHRA definition may imply. It is simply the reality, a reality that I experienced first hand in my nearly 4 years living and working in the occupied Palestinian territory.

As I’m sure you know, such shameful false accusations of antisemitism have a major chilling effect on advocates and those courageous enough to even consider speaking critically of Israel, be they MPs like yourselves, journalists, teachers, or students. These false accusations of antisemitism are also damaging to the fight against genuine antisemitism, which of course remains a serious concern. Because if someone claims that saying “Free Palestine” is antisemitic, as several organizations told antiracist Toronto writer Desmond Cole last year, why should people believe us when we experience genuine antsemitic acts?

I’m proud to say that 3 years after the launch of our NoIHRA campaign, we’ve managed to significantly hold back adoptions of the IHRA definition in Canada. Cities including Vancouver, Calgary and Montreal have refused to adopt it. The Canadian Association of University Teachers as well as over 40 university faculty associations have passed motions opposing its adoption on their campuses.

And more and more individuals and organizations are coming out opposing it and supporting much better and less harmful definitions of antisemitism such as that contained within the Jerusalem Declaration of Antisemitism, a document that came about in response to the controversies around IHRA and which has been endorsed by over 350 of the world’s most respected scholars of Holocaust history, Jewish studies, and Middle East studies.

It is incredibly important that we are able to differentiate between what IS antisemitic, and what is NOT in order to further both Palestinian human rights and the fight against antisemitism. This is why we developed our increasingly popular antisemitism trainings, which we’d be more than happy to offer to MPs and their staff.

I’d also like to extend an invitation to all of you to attend an online event we are holding on June 28 entitled, How IHRA Harms Us: An Anti-racist conversation on Weaponized Antisemitism. That event will zero in on the impacts the IHRA definition and associated false accusations of antisemitism have had in Canada on students and faculty and how it intersects in particular with Islamophobia and Anti-Palestinian Racism.

Further, I invite you all to sign our Together Against Apartheid pledge, stating that you recognize that Israel is practicing apartheid, that it is not antisemitic to say so, and that you support accountability for Israel on account of its violations of Palestinian human rights.

This pledge has already been signed by some 4000 people, including over a dozen federal and provincial politicians in Canada so far, as well as cultural figures and human rights experts. You can find that pledge on our brand new campaign website, togetheragainstapartheid.org, along with clear and easily accessible information on what life is like for Palestinians under apartheid, helpful quotes from others – such as the former Israeli Attorney general Michael Benyair – who have named it as such, and opportunities to take action.

As parliamentarians in a state which shamefully provides Israel with moral cover on the world stage, the importance of you speaking out and recognizing what Israel is doing cannot be understated. After all, recognition of wrongdoing is the first step toward justice and accountability. And while some groups in Canada hope to silence or make it difficult for our elected members to speak out, I ask you not to acquiesce to them and to have the moral courage to advocate for Palestinian human rights.