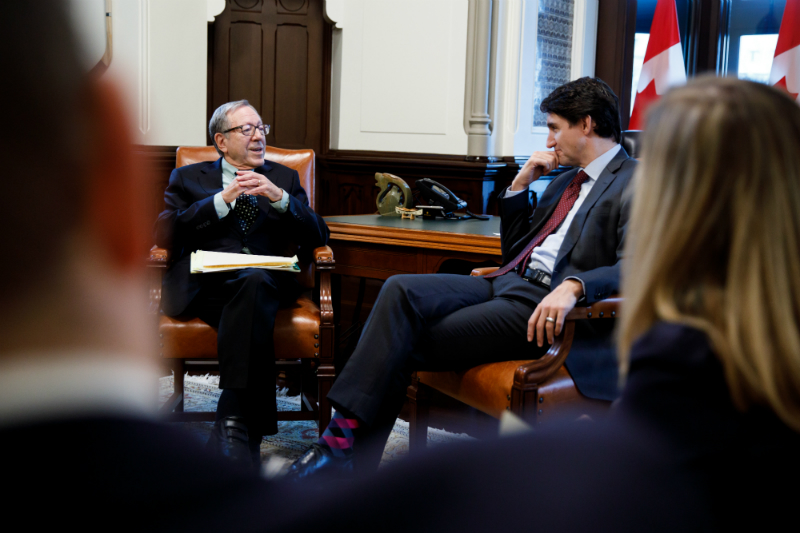 Independent Jewish Voices Canada (IJV) is deeply troubled by today’s announcement from the Prime Minister’s Office that Irwin Cotler has been appointed as Canada’s Special Envoy on Preserving Holocaust Remembrance and Combatting Antisemitism. Cotler, who previously served as Canada’s justice minister and attorney general, will soon lead the Government of Canada’s delegation to the International Holocaust Remembrance Alliance (IHRA).

In appointing Irwin Cotler to this position, the Canadian government further aligns itself with the highly controversial IHRA definition of antisemitism, which is being weaponized to portray supporters of Palestinian human rights as antisemitic, and to shield Israel from legitimate criticism. Unfortunately, the IHRA definition already has a long track record of suppressing Palestinian voices and Palestinian human rights advocates around the world.

“Following Cotler’s appointment to this post, it is critical that provincial and municipal governments, university administrations, and other institutions take a firm stand against the IHRA definition now,” says Corey Balsam, IJV’s national coordinator. “Antisemitism must be fought, but it cannot be done at the expense of legitimate criticism and protest of Israeli human rights violations.”

Irwin Cotler is one of the leading proponents of the “new antisemitism” movement, which seeks to label criticism of Israel as antisemitic. Justin Trudeau has acknowledged Cotler’s influence on the Canadian government’s position against the nonviolent BDS – Boycott, Divestment and Sanctions – movement for Palestinian rights.

“It is vital that the memory of the Holocaust be preserved and that antisemitism by taken on forcefully,” Balsam explains. “However the appointment of Cotler to such a post virtually guarantees that the Canadian government will go about this in the wrong way. Cotler’s approach is likely to be counterproductive to the fight against antisemitism because it seeks to muddy the waters and will ultimately confuse people as to what is and is not antisemitic.”

IJV is promoting its own more precise definition of antisemitism, and is part of a growing network of Jewish, Palestinian, civil liberties and human rights organizations that are taking a stand against the weaponization of the IHRA definition. This network includes the BC Civil Liberties Association, the Canadian Federation of Students, the Canadian Labour Congress, the Ontario Confederation of University Faculty Associations and many others.