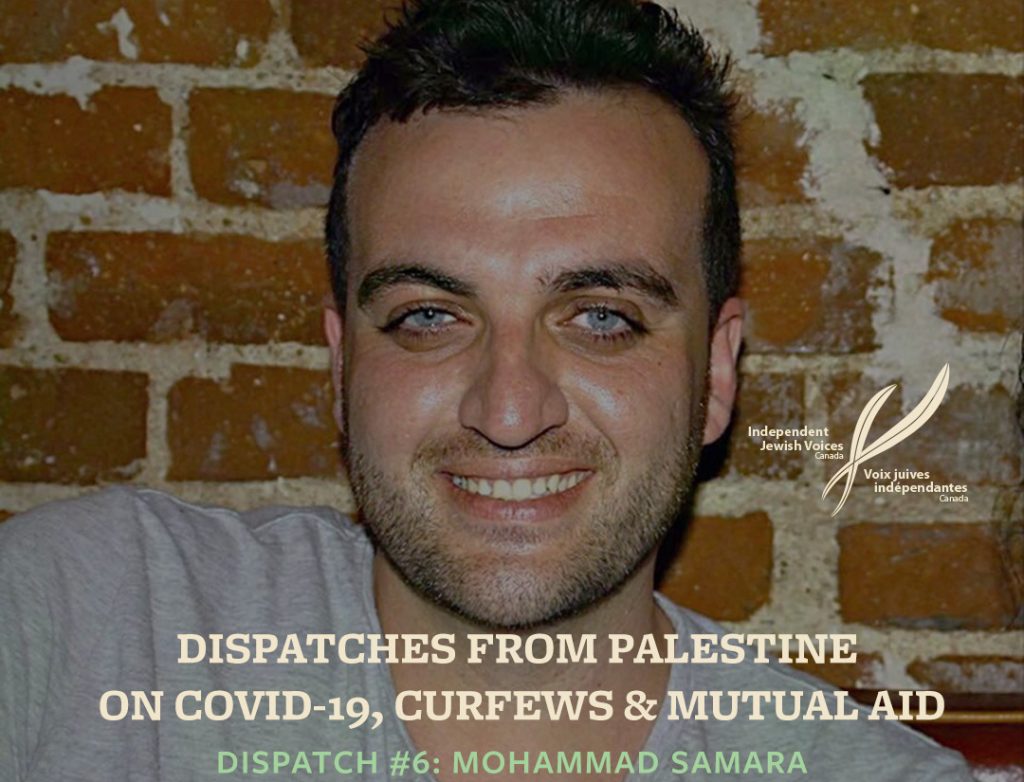 Over the last few weeks, IJV has been releasing a series of dispatches from Palestinians reflecting on life under the COVID-19 pandemic. As the world grapples with the outbreak, and as we organize mutual aid and solidarity in many cities, we must keep Palestine in our minds and hearts.

Now more than ever, Palestine must be free. The brutal siege of Gaza, and the ongoing occupation of the West Bank, are tinderboxes for the Coronavirus. To date, there have been over 280 confirmed Coronavirus cases in the Occupied Palestinian Territories, including 13 in the besieged Gaza Strip. Medical aid must get in, people must have access to testing, and Israel must end its daily restrictions on Palestinian life.
If you appreciate these dispatches, and want to see more work like this, please donate to Independent Jewish Voices today.

Our dispatch today comes from Mohammad Samara, a 37-year old nurse living in Nablus, in the West Bank. Mohammad shares a home with his wife and two young daughters (one is 3-years old, and the other is 4 months). He also describes himself as a social activist, an English teacher, and a tour-guide. He’s been living in Nablus since 2003.

When I spoke with Mohammad, he was taking a couple days off to go visit his parents in the countryside outside of Nablus, a big bustling West Bank city.

“It seems that things are getting more and more difficult, because we’re getting more cases,” Mohammad tells me over a choppy cell phone connection. “Today we just confirmed another 14 cases.” At the time of this writing (April 14), there are around 280 confirmed cases of COVID-19 in the Occupied Palestinian Territories of the West Bank and Gaza.

“Since the start of this, my life as a nurse has changed. We have to work more than normal. I work in a public surgical hospital in Nablus. We don’t have any scheduled operations – they’ve all been cancelled due to these emergency measures. We only get the worst cases that absolutely need treatment, because we need to be ready with all we have.

I ask him to describe the situation in Nablus, whether or not shops have started to close, or if things are continuing as normal.

“The Palestinian Prime Minister Mohammad Shtayyeh announced the security measures in early March. Schools and universities all stopped, and places with public gatherings were shut down. The P.A. told people to avoid mosques and churches in the beginning, and then they were closed down completely. About a week later, the P.A. closed all the cafes and restaurants, as well as parks and playgrounds. Now kids don’t have anywhere indoors or outdoors where they can play together.

This is really difficult. I have a 3-year old daughter, and she gets bored really easily. And it’s hard to explain all these restrictions to a little kid, but I think my daughter understands, and we try to keep her busy.”

As many countries around the world are now in nearly month-long lockdowns, we’re beginning to see more images of public places normally teeming with life becoming the domain of pigeons, scattered trash, or police with masks. Some of the most remarkable scenes of late have been the emptied out landscapes of Times Square in New York, St. Peter’s Square in the Vatican, or the Great Mosque of Mecca. I ask Mohammad to describe the atmosphere in the streets of Nablus.

“Most people are freaked out. The most important things are food and groceries. We’re seeing grocery stores get emptied out pretty quickly. The streets are empty. There are no taxis. Public transportation is shut down, so people can’t get to work. The surrounding area around Nablus is also blockaded by P.A. police.

But this makes me think of the period between 2003 to 2005 when I was studying to be a nurse. Nablus was surrounded by many Israeli checkpoints. For me, it was really difficult coming and going from Nablus to my town to study. The trip should have normally taken 20 minutes from my town to Nablus, but during that period it would take 3 hours. I would have to go around mountains, transfer from car to car, walk for long periods. The coronavirus lockdown measures aren’t traumatizing because I’ve already had this experience!

I’m not sure how the younger generations are reacting to this, but because I lived through the Second Intifada with its travel restrictions, I can be a bit more relaxed.

People in the city, though, are anxious. Most workers in Nablus are day labourers – they don’t have a fixed salary. Many people from the West Bank work in Israel, but now they are being sent back to the West Bank. The disease is spreading very quickly in Israel. So all of these people are out of work now, and don’t know what to do.”

A few weeks ago, shocking reports surfaced that Israeli authorities were simply dropping off sick Palestinian day labourers in Israel at checkpoints, and leaving them to fend for themselves.

A lot of people in different parts of the world are trying to cope with not being able to leave their houses. Police in some countries, such as Italy, are even arresting people for leaving their houses, and in Montreal, where I’m based, police have been issuing steep fines to homeless youth who have nowhere to go during the pandemic. It is becoming clear that police repression is aggravating social tensions linked to the virus in many countries. I ask Mohammad if he could reflect on what life was like under Israeli military curfews, and how people managed to make ends meet.

“I remember the curfew of 2003 in Nablus. It was really long. Even medical teams weren’t able to move around the city. During the curfew, people opened their houses to be used as field hospitals. The medical teams were trying all they could do to get medical supplies and food delivered to families during that time.”

“Now I see that since this quarantine started, there have been very interesting initiatives that have started up. Some grocery stores and restaurants have stepped up to help out people who’ve lost their jobs by coming up with pay-it-forward programs. So anyone can go to these shops, leave a donation, and then an unemployed person can come and buy things with that donation. At one particular shop, 11 different families benefited from this in one week.

In many of our restaurants in Nablus, before they had to close down they made daily meals for families in need. And now we have volunteer brigades who are helping people out. In fact, just the other day, I was kind of stuck in the middle of nowhere, and a couple of these volunteers saw me, asked how I was doing, took my temperature, and then offered to drive me home. These people are doing patrols, looking out for people who don’t have anywhere to go or are far from home.”

As Mohammad is explaining this, I’m really in awe at what’s happening. I tell him that in Montreal, not many restaurants are stepping up to feed people in the community. I tell him that it sounds like there’s a huge level of social solidarity in Palestine right now.

“This is what we learn growing up,” Mohammad responds. “We’re raised by our parents to take care of each other. Not just our families, but other people in our neighborhood as well. Because everyone here believes that when you do a good thing for someone else, a good thing will happen to you.

In villages right now, young people are starting to organize themselves into committees for the quarantines. They help people if they need anything. For example, if someone runs out of rice or bread, they can call the committee, and volunteers will bring it to them. This is to encourage most people to stay at home.”

In closing, I ask Mohammad if he has advice to offer to people who are having a hard time coping with Coronavirus lockdowns.

Maybe this is a time to go back to our roots — forget about some technologies, restaurants, cafes, or travelling. Let’s spend some time with ourselves or our own families, and try to protect them and protect ourselves from the virus. During any hard times, we gain strength from people we care about.”

Just as I’m wrapping up my phone call with Mohammad, he brings up a poem that he’s been thinking of lately, “We Teach Life, Sir” by Palestinian spoken word artist Rafeef Ziadah. “Anything I can’t say myself, has been said in this poem”.