Dispatches From Palestine on COVID-19, Curfews and Mutual Aid 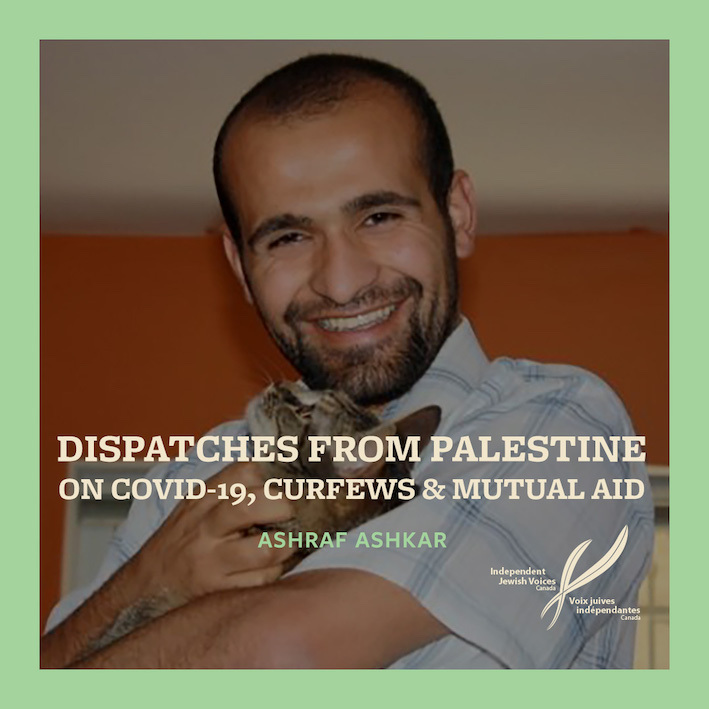 Now more than ever, Palestine must be free. The brutal siege of Gaza, and the ongoing occupation of the West Bank, are tinderboxes for the Coronavirus. Medical aid must get in, people must have access to testing, and Israel must end its daily restrictions on Palestinian life.

We begin our dispatches with Ashraf Ashkar. Ashraf is originally from Seida, a small Palestinian village in the Tulkarm region of the West Bank. He has been living in St-Paul, Minnesota for the last 3 years. He currently works for the YMCA of St-Paul on programs for underserved youth in the city.

“I have a 9-year old son now, and we’ve been having conversations about Palestine and the Coronavirus, especially since his school closed yesterday for the next two weeks. We’ve been talking about what to do around the house.”

“Yesterday I was telling him about how the Coronavirus’ impacts of not being able to go to work or school remind me of home in Palestine when I was a kid. We used to not go to school because of military curfew or invasion. And when I was a kid, I really liked that — not going to school, despite the fact that it was due to military invasion. It was only later that I learned it was an awful thing. So my son told me that he was really excited there was no school, but it’s also bad there’s this virus and people are getting hurt. It was interesting to compare my experiences as a kid in Palestine to my son’s experience with the Coronavirus.”

I asked Ashraf if he could count the amount of times he was under Israeli military curfew in his lifetime. He said he couldn’t.

“I was under curfew so many times growing up that it’s impossible to count. A military curfew could be just a few hours, or days, a quick invasion.”

In Palestine we face so many challenges, and the biggest challenge is the occupation. The virus is just a little problem.

“This morning I was tuned into a Palestinian TV station, and they were talking about the virus, receiving calls from kids, and talking to them about what they could do inside the house – games for reading and learning new vocabulary, etc. And the host of the program said one thing that really stood out for me: she said that in Palestine we face so many challenges, and the biggest challenge is the occupation. The virus is just a little problem, and we can overcome it, because we are resilient to atrocities and life changes. We can do this.”

Ashraf and I first met in Seida during a military curfew in the winter of 2005. I was volunteering there doing accompaniment work with the International Solidarity Movement (ISM). I asked him how Palestinians got by during that time.

“That curfew in Seida lasted for several days. I was in college at the time, outside the village. I went home to visit my family, despite knowing there was a curfew. I don’t remember why, but I just really wanted to go home. So there was a military checkpoint at the entrance of my village. They stopped us, and I had to talk to a soldier and argue with him that I was from the village, and therefore they should let me in. But they refused my entry. So I had to sneak in.”

“I got to my parents house, and then started working with the mayor on a plan for food distribution. We had major food shortages because the stores were running out. It’s a small village with just a few shops, and they can’t handle sustaining the whole food supply for an entire village, even for a few days.”

“The mayor really wanted to help families who were unable to get out of the house because of the curfew. So what I did was coordinate with shops, telling them which families needed bread, milk, or other food. Then the shops would prepare the orders, and I would tell them when I would show up. Then I would go out to get the food, but I would have to go through alleys, or jump from roof to roof to make it to the families.”

“Also at that time, the village was running on electric generators. There was one main generator site to power all of Seida, and it needed maintenance. There was one person in charge of keeping it running, and the power was down for at least one night. This electrician was in his home, but he was terrified to leave because there was a watchtower next door, and the military was occupying his neighbour’s house. So I went to his house, got the key, opened the electric generator, and re-started it.”

“I really think that the virus is a tiny challenge compared to the challenges we’ve faced in Palestine. What we’ve been experiencing in Palestine, from arrests, to assassinations, to land theft, to control of life in general — everything is fully and completely controlled by the Israeli army and military law. These challenges are much bigger, and we’ve learned lessons from them.”

“Even today with the Coronavirus, I’m not afraid. Like what could happen? I’ve seen the worst.  It’s just a virus. Take basic measures, extra care, and you’ll be fine. You don’t need to be terrified. If you panic, it could get worse.”

Take a deep breath, think about it rationally. Think about what you can do in a sensible way to take care of yourself, and think about others too: the elderly, single parents, families who are unable to work from home.

I asked Ashraf what his advice was to people who are coping with various levels of self-isolation or quarantine right now. Here was his response:

“It’s quite simple: take a deep breath, think about it rationally. Think about what you can do in a sensible way to take care of yourself, and think about others too: the elderly, single parents, families who are unable to work from home. Buy just enough for what you need. Be mindful of your actions, and be aware that this is affecting all of us, not just one person. Try not to panic. It’s just a virus, we’ll get through it.”