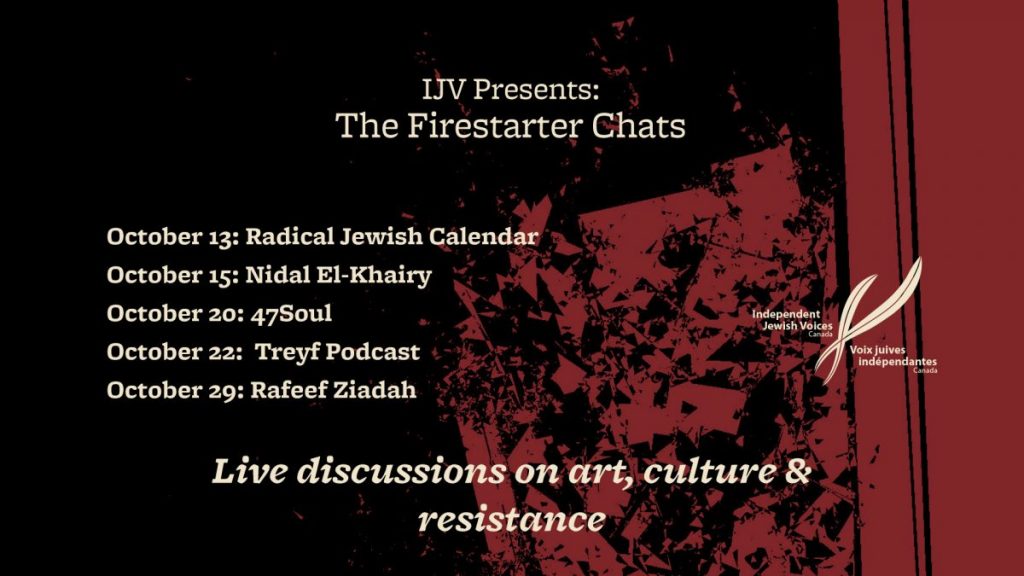 Join us as we head into an exciting fall event series! IJV’s Firestarter Chats will bring us into conversation with some of today’s most exciting voices – people from Turtle Island to Palestine (and beyond!) who are making sparks, and fanning the flames of freedom. Come hear from musicians, poets, podcasters, artists and activists.

And while all these events are free, donations to IJV are more than appreciated to help support events like these in the future!

Rafeef Ziadah is a Palestinian spoken word artist and human rights activist based in London, UK. Her performance of poems like ‘We Teach Life, Sir’ and ‘Shades of Anger’ went viral within days of its release. Her live readings offer a moving blend of poetry and music. Since releasing her first album, Rafeef has headlined prestigious performance venues across several countries with powerful readings on war, exile, gender and racism.

We Teach Life, her second album, is a powerful collection of spoken word with original music compositions, which she brings to the stage with Australian guitarist and We Teach Life producer Phil Monsour.  Rafeef received the Ontario Arts Council Grant from the Word of Mouth programme to create her debut spoken-word album Hadeel. She regularly conducts spoken word workshops with the aim of empowering expression through writing and performance. She was chosen to represent Palestine at the South Bank Centre Poets Olympiad in 2012.

Co-presented by Academics for Palestine – Concordia

Kareem Samara is a multi-instrumentalist, improviser, composer and political organiser. His particular area of interest is in diasporic identity and de-colonial possibilities of sound and music, with particular focus on sonic representations of place and time.

As well as performing solo with traditional Arabic instruments and electronics, Kareem is a serial collaborator with musicians and poets worldwide. He performs solo and as a member of a trio with Ryan Harvey and Shireen Lilith, with whom he has released Thin Blue Border Volume 1 and 2 on Firebrand records, exploring the link between struggles such as Black Lives Matter, the Arab Spring.

The Radical Jewish Calendar project was dreamed up by some Jews who were tired of using calendars with advertisements for cemeteries as their only reference for Jewish holy days. This is a collaborative effort between friends and many contributors.

This calendar is a celebration of Jewish culture that is intersectional, queer, feminist, anti-racist, and that challenges and builds a Judaism and Jewishness beyond Zionism. Because you’ve always wanted to find out when Ta’anit Esther and the anniversary of the BDS Call are, all in the same place.

Layout editor Rabbi Ariana Katz will be joining us for an Instagram live to talk about the brand new edition of the calendar for 5781!

If you’ve ever been to a Palestine solidarity rally, an Israeli Apartheid Week event, or strolled the streets of Oakland, Montreal, or Ramallah, you’ve probably seen Nidal’s work.

Nidal El-Khairy is an illustrator living in Amman, Jordan. After completing a Bachelor’s in Fine Arts from the University of Massachusetts at Lowell, he moved to Montreal, Canada where he spent four and half years working on political art in a context of local  grass-roots social movements such as the Coalition against the Deportation of Palestinian refugees, No One Is Illegal and Solidarity Across Boarders. He also had solo and group exhibitions in Montreal, Toronto, Tokyo, Beirut, Amman and Caracas.

October 20 – In Conversation with 47Soul

Moderated by Sundus Abdul Hadi (We Are The Medium)

Originally formed in Jordan and with members now scattered between Palestine, London and the USA, 47SOUL have pioneered a unique style that they call Shamstep, in which hip hop and electronica are fused with Arab-influenced melodies and styles. These include Shaabi, traditional dabke dance and the pop music of Levant.

The collective, formed of Tareq, Ramzy Suleiman and Walaa Sbait, have toured the world since releasing their debut album ‘Balfron Promise’ two years ago, building up an impressive following across the Middle East and the global Arab diaspora. In 2019, they performed for NPR’s Tiny Desk Concert, KEXP session and Youtube Dubai Space during a stint of over 160 live shows internationally. Their latest album Semitics, mixes stomping, no compromise dance music with powerful new songs and challenging, thoughtful lyrics in both Arabic and English.

Sundus Abdul Hadi is an artist and writer of Iraqi origin. She was raised and educated in Tiohtià:ke/Montréal, where she earned a BFA in Studio Arts and Art History and a MA in Media Studies. Articulated through her artistic practice, writing and curation, Sundus’ work is a sensitive reflection on trauma, struggle, and care. She is the author/illustrator of Shams, a children’s book about trauma, transformation and healing. Her upcoming book titled “Take Care of Your Self: The Art and Cultures of Care and Liberation” (Common Notions, November 2020) is a non-fiction book about care, curation and community. She is the cofounder of We Are The Medium, an artist collective and culture point.