From IDF to IJV 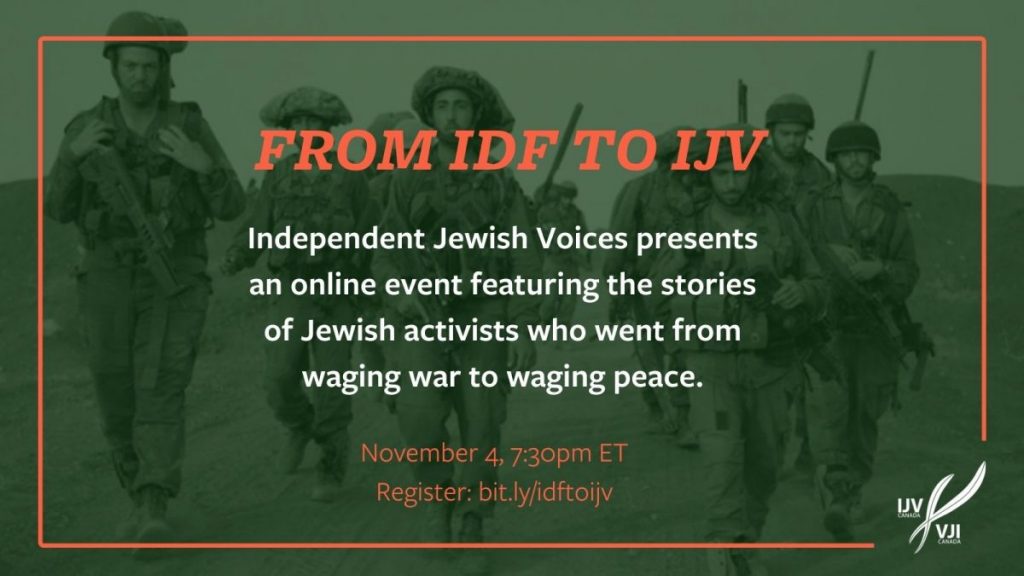 Join us to hear IJV members reflect on their time serving in the Israel Defense Forces (IDF), and what moved them towards a position of support for Palestinian human rights and liberation.

Yom Shamash was born in Israel. At the age of 6, his family moved to Brazil. He returned to Israel in 1971 as a member of the Hashomer Hatzair group and settled in Kibbutz Zikim, south of Ashkelon. He served in the IDF in the Nahal brigade and was in the Sinai in the Yom Kippur War. He currently lives in Vancouver, where he is a member of IJV-Vancouver.

Daphna Levit was born in Israel and was an enthusiastic Zionist who served in the army NAHAL corps on the then border with Egypt, until the 1967 Six Day War.  She was then recruited to serve in the Military Spokesman Office (Intelligence Corps) as a Press Liaison officer to attend to and escort foreign journalists to sensitive locations.  This move was due to her fluency in several languages.  One of her jobs was to ensure that the foreign press did not violate the strict censorship rules and did not stray into prohibited danger zones.  She accompanied reporters to the Allenby Bridge across which Palestinians fled to Jordan when Israel “conquered” the whole of historical Palestine and expelled about 300,000 Palestinians from their homes.  Watching the exodus, the fear and the misery of this flight was what turned Daphna into the peace activist she became. She co-authored an earlier book on the Middle East impelled by the Gaza War of 2008-2009. Her most recent book, Wrestling With Zionism was the culmination of many years as a human rights activist and draws on the diversity of dissent that commenced with the inception of Zionism in the 19th century.

Rafi Silver was born in the US and immigrated to Israel in 1971. He did his mandatory service in the IDF from 1974-76 and was in the reserves until 1996. A former member of a kibbutz and a retired social worker, Rafi immigrated to Canada in 2001 and lives in Montreal. He is an active member of IJV-Montreal, and sits on the national steering committee of IJV Canada.

Moderated by Lia Tarachansky – Lia Tarachansky is an Israeli-Canadian journalist and filmmaker born in the former Soviet Union. She has made short, experimental, and feature films and worked as the Middle East correspondent from Israel/Palestine. Some of her films screened on TV, won awards and toured globally; others died on her hard drives. She’s the Education Director of the Morris Winchevsky School in Toronto, and spends her days filming, designing lesson plans, and reading barely-comprehensible books for her PhD in Media Studies.