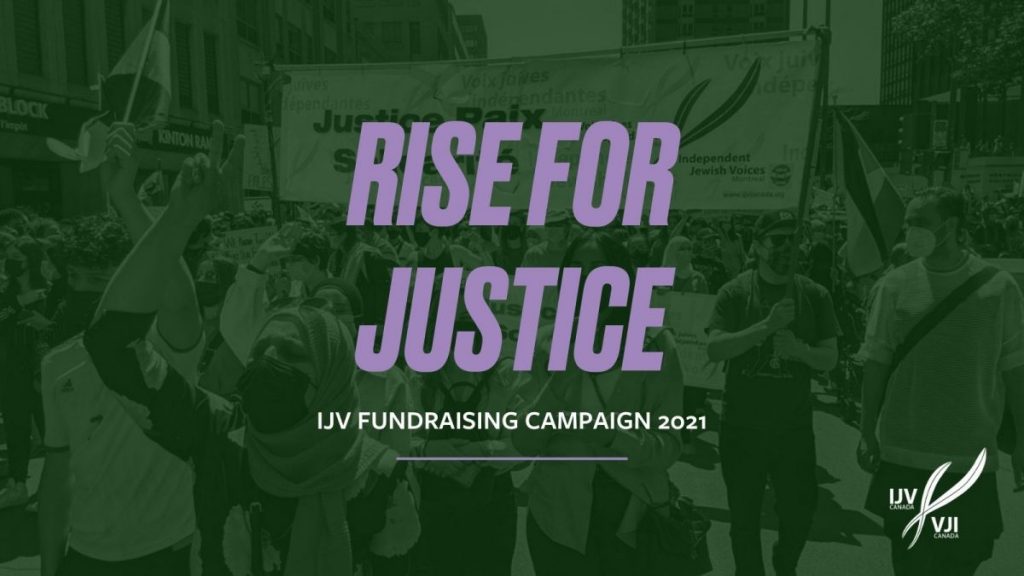 Does this year feel different to you? It does for us.

Thanks to the hard work of IJV members and our allies in the Palestine solidarity movement, we’ve made incredible strides in shifting the debate this year. For the better.

Respected human rights organizations B’Tselem and Human Rights Watch have now affirmed what Palestinians and their supporters have been saying for years. More and more, Canadians are recognizing Israel’s rule over Palestinians for what it is: apartheid.

While Israeli bombs were falling on Gaza this past May, we were proud to have stood shoulder-to-shoulder with our Palestinian siblings, and to have amplified the unprecedented outpouring of solidarity with Palestine across the Canadian media landscape.

Now it’s up to us to seize the moment. Let’s rise for justice.

IJV’s annual fundraising campaign is underway right now. We’re looking to raise $60,000 by the end of Chanukah (December 6th) so we can take advantage of the historic moment we’re in. Will you help us accomplish our goal by making a donation today?

Where does your money go?

A $7 donation will cover one of our phone lines for one month, allowing us to network and organize across the country.

An $18 donation will cover one month of web hosting for our No IHRA campaign website.

A $50 donation will cover the cost of printing a banner that one of our chapters can use in a demonstration or rally.

A $250 donation will cover the cost of one webinar with an inspiring, groundbreaking speaker.

A $500 donation will cover the cost of sending out a press release on the national wire service to news desks across Canada.

A $1500 donation will cover the cost of one promotional video used for our campaigns.