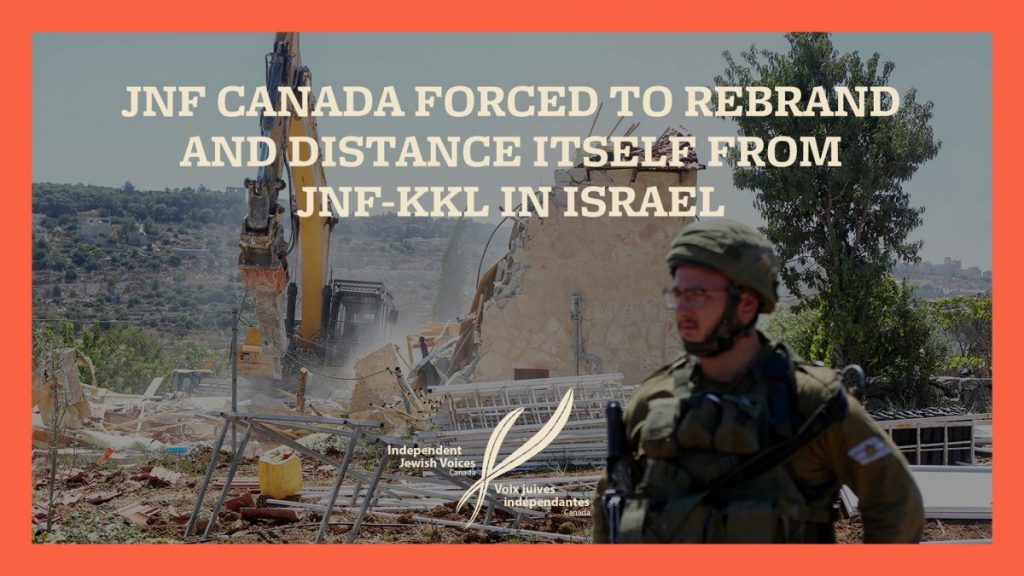 Since its inception 120 years ago, the Jewish National Fund-Keren Kayemeth LeIsrael (JNF-KKL) has been one of the main engines for the colonization of Palestinian lands. It owns 13% of the land in Israel, and has helped to entrench apartheid in the country through its policy to lease land exclusively to Jews. For several years now, Independent Jewish Voices has been leading a campaign against the JNF’s subsidiary here at home, JNF Canada. Our main demand has been for the Canada Revenue Agency (CRA) to strip JNF Canada of its charitable status due to repeated violations of Canadian and international law, including in the occupied Palestinian territory. See here for CBC’s groundbreaking coverage of our campaign back in 2019.

Amidst widespread public outcry against JNF-KKL’s recent announcement that it may start officially buying land in the occupied West Bank (it has long done so quietly), JNF Canada has been working to distance itself from its parent organization in Israel. To this end, JNF Canada announced some major organizational changes, detailed in a letter buried on its website here.

In its letter, JNF Canada reveals that it has rebranded by changing its logo to differentiate it from the JNF-KKL logo, removed “KKL” from its corporate name and signed a memorandum of understanding with KKL defining their relationship. According to that MOU, JNF Canada funds will ostensibly not be “co-mingled with KKL’s general accounts”.

Further signs of this distancing can be found on its website where JNF Canada now states that in the past “it took on the role of planting trees, building water reservoirs,” etc – which we know have often been dubious tools to displace Palestinians and cover up destroyed villages – but now focuses on “social service infrastructure to benefit vulnerable populations.”

There is no question that IJV’s #StopJNFCanada campaign played a major role in pushing the CRA, and by extension JNF Canada, into action. Be it by sending emails (over 1000 the past 2 months alone!), signing our 2019 parliamentary petition, taking part in a public demonstrations or sending one of our paper postcards, our members’ efforts clearly made a difference.

Questions nevertheless remain, including with respect to JNF Canada’s current projects and ongoing affiliation with an organization that continues to discriminate and colonize Palestinian/Bedouin land on both sides of the Green Line. And as to why JNF Canada has never been penalized for its repeated violations of Canadian law and policy dating back more than half a century. Given the harm its work has caused – including on Palestinian-Canadian physician Ismail Zayid who’s West Bank village was demolished and depopulated to make way for JNF Canada Park – we maintain our demand for JNF Canada’s charitable status to be revoked.