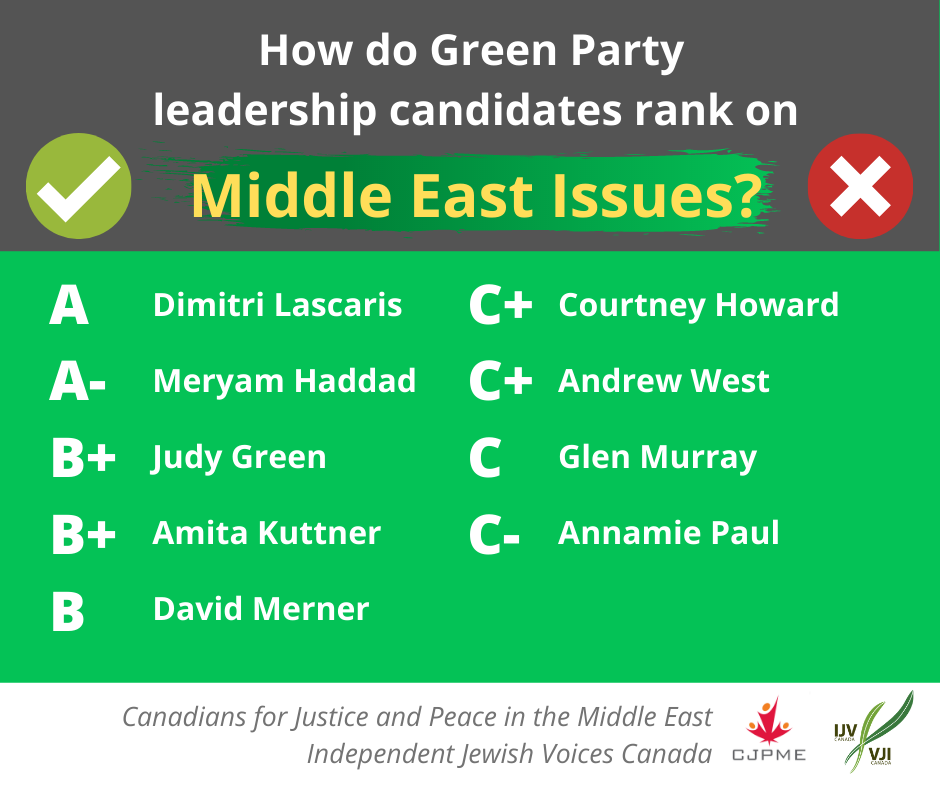 Montreal, August 20, 2020 — Canadians for Justice and Peace in the Middle East (CJPME) and Independent Jewish Voices Canada (IJV) have conducted a comprehensive analysis of each of the nine Green Party of Canada (GPC) leadership candidates on Middle East-related issues, awarding Dimitri Lascaris the best score with an A rating. Meryam Haddad was next with an A-, followed by Judy Green and Amita Kuttner each with a B+. At the bottom of the ranking were Glen Murray with a C and Annamie Paul with a C-.

This assessment was based in part on candidates’ responses to a questionnaire on key Canadian policy issues related to the Middle East, as well as the candidates’ social media, press statements, published interviews, leadership town halls, and more. Based on this analysis, CJPME and IJV
concluded that – in terms of their commitment to a constructive approach to the Middle East – the candidates rank as follows:

The Green Party’s current policies on Middle East issues, including on Israel and Palestine, are particularly bold and forward-looking, and as a progressive party none of the candidates expressed views fundamentally contrary to principles of human rights or international law. “Many of the Green Party leadership candidates have expressed courageous positions, from imposing sanctions on Israel to phasing out Canada’s international arms trade,” said Michael Bueckert, Vice President of CJPME, “but Dimitri Lascaris stands out from the rest, due to his extensive public record as a long-time activist for Palestinian human rights.”

Not every leadership candidate has a good track record on these issues, and CJPME and IJV urge Green Party members to choose a leader they trust to prioritize and advocate for the issues they care about. “This is an important opportunity for the party not only to expand on its strong policy positions, but to be more vocal and clear in its advocacy for human rights justice in Israel-Palestine” said Corey Balsam, National Coordinator of IJV.

CJPME and IJV are both non-partisan and regularly provide evaluations of candidates during party leadership races, and during general elections. Both organizations understand that Middle East-related issues are not the sole concerns of GPC members, but hope that this assessment will help voters make an informed choice when casting their ballots for a new leader. CJPME and IJV encourage Canadians who share Green Party values to get involved in the process of choosing the next GPC leader. The deadline to become a member and vote in the race is September 3rd.

The whole or parts of this press release can be reproduced without permission.