IAW Webinar: Is Israel An Apartheid State? If So, What Must Be Done? 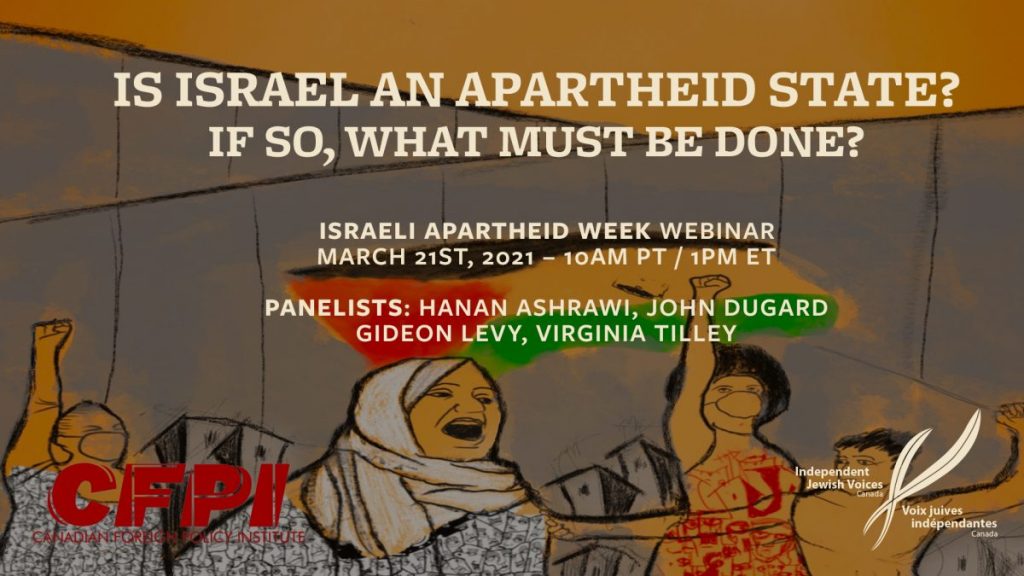 “Is Israel an Apartheid State? If So, What Must Be Done?”

Israeli apartheid. Israel and its lobbyists boil over with anger when they hear the term. Many media outlets avoid it.  While global social justice initiatives like Israeli Apartheid Week or the Boycott Divestment and Sanctions (BDS) campaign have been smeared as antisemitic, including by the Canadian government, they continue to gather steam around the world, gaining the support of Jews, Palestinians, and people of all faiths and races. Palestinians have long referred to their day-to-day realities as “apartheid.” Numerous legal scholars and academics argue Israel does practice apartheid. The leading Israeli human rights organization, B’tselem, has just released a ground-breaking report this year labelling Israel as an apartheid regime over all the territory it controls.

If Israel is an apartheid state, as many argue, how can we work to end Israeli apartheid and win equality and justice for everyone living in the region? Join us for this event to hear what four of the leading authorities on the ‘Crime of Apartheid’ have to say.

Dr. Hanan Ashrawi is a distinguished Palestinian leader, legislator, activist, and scholar who served as a member of the Leadership Committee and as an official spokesperson of the Palestinian delegation to the Middle East peace process, beginning with the Madrid Peace Conference of 1991.  Making history as the first woman to hold a seat in the highest executive body in Palestine, she was elected as member of the Executive Committee of the Palestine Liberation Organization (PLO) in 2009 and most recently in 2018. In 1996, Dr. Ashrawi was appointed as the Palestinian Authority Minister of Higher Education and Research.

Gideon Levy is a renowned Israeli journalist and author. Levy writes opinion pieces and a weekly column for the newspaper Haaretz, that often focus on the Israeli occupation of the Palestinian territories. Levy has won several prizes for his articles on human rights in the Israeli-occupied territories.

Dr. Virginia Tilley is a professor of political science who has worked on the question of Palestine since the mid-1980s. She is author of The One-State Solution (2005), editor and co-author of Beyond Occupation: Apartheid, Colonialism and International Law in the Occupied Palestinian Territories (2012) and, with Richard Falk, the UN ESCWA report, Israeli Practices regarding the Question of Apartheid and Question of Apartheid (2017).

John Dugard is a South African lawyer living in the Netherlands. During the apartheid era in South Africa, he directed a human rights research, litigation and advocacy centre in Johannesburg. From 2001 to 2007 he was UN Special Rapporteur on the Human Rights Situation in the Occupied Palestinian Territory, in which capacity he visited Palestine regularly and reported on human rights violations committed by Israel. In 2001 he chaired a UN Commission of Inquiry into the Second Intifada and in 2009 he chaired an Arab League Fact Finding Mission into Israeli’s 2008-9 assault on Gaza. He has written extensively on apartheid in both South Africa and occupied Palestine. (See, in particular, John Dugard, Confronting Apartheid. A Personal History of South Africa, Namibia and Palestine, Jacana, Johannesburg 2018.) He has served as judge ad hoc on the International Court of Justice.

Israeli Apartheid Week (IAW) is a tool for mobilizing grassroots support on the global level for the Palestinian struggle for justice. It is a grassroots mechanism to raise awareness about Israeli apartheid and to mobilize support for strategic BDS campaigns to help bring an end to this system of oppression.

IAW provides an opportunity to network and strengthen the links between the Palestinian liberation struggle and other struggles against racism, oppression, and discrimination. In 2021, as every year since 2005, we will once again join our voices to denounce apartheid and celebrate our diversity. During the week from March 14th to March 21st, 2021 we will organize a series of inspiring actions and events to show that now, more than ever, we are #UnitedAgainstRacism.