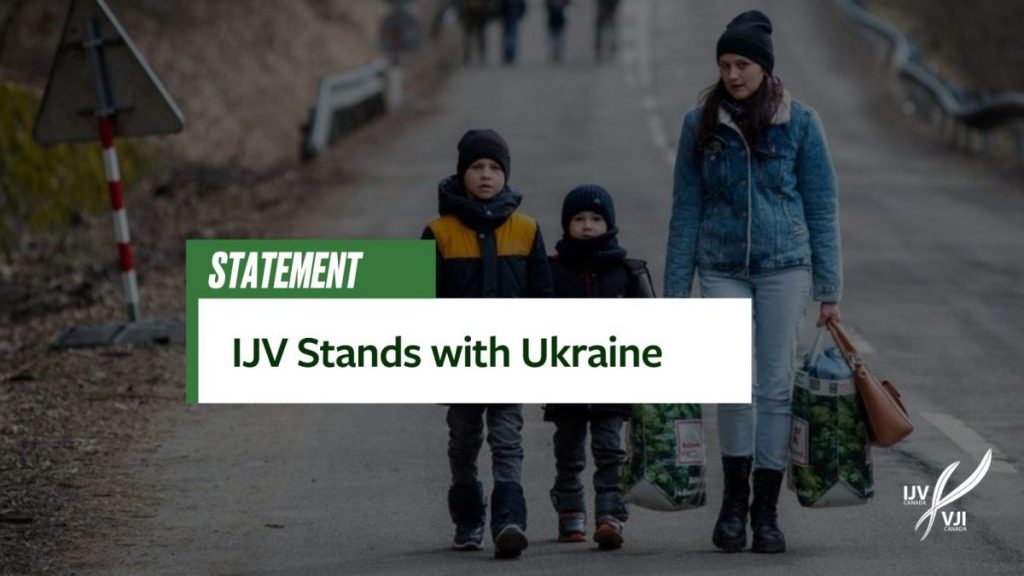 Independent Jewish Voices (IJV) Canada joins with millions of people around the world in calling for an immediate ceasefire and an end to the Russian invasion of Ukraine. We also join with the global anti-war movement in saying “no” to those calling for a broader war, which could have disastrous consequences not only for Ukrainians and Russians, but for the whole of humanity.

We have watched with anger the rising civilian casualties, the millions of Ukrainians forced to flee their homes, and the rising fear and real risk of nuclear devastation.

We stand in solidarity with the people of Ukraine in their fight for survival and self-determination, and with the Russians speaking out, even as they face brutal retaliation, arrests, and multiple forms of censorship under the Putin Regime.

We must oppose this escalating war as it always has the most devastating impact on people who have no choice or voice in these decisions. War is a crime against our humanity.

As for refugees—be they from Ukraine, or elsewhere such as Yemen, Syria and Palestine—we call on Canada and other countries to offer them sanctuary.

We are committed to stopping the war in Ukraine and oppose Canadian involvement in military action. We encourage and support real political solutions and support those fighting for their lives and fleeing to safety.

As with Israel—our principal focus as an organization—we support those using the time-honoured non-violent tools of boycott, divestment and sanctions to help bring an end to ongoing war crimes, and encourage Canadians to look to the Palestinian BDS movement for guidance on how to do so effectively and ethically.

From Turtle Island to Palestine to Ukraine, IJV stands with those resisting military aggression, invasion and occupation.