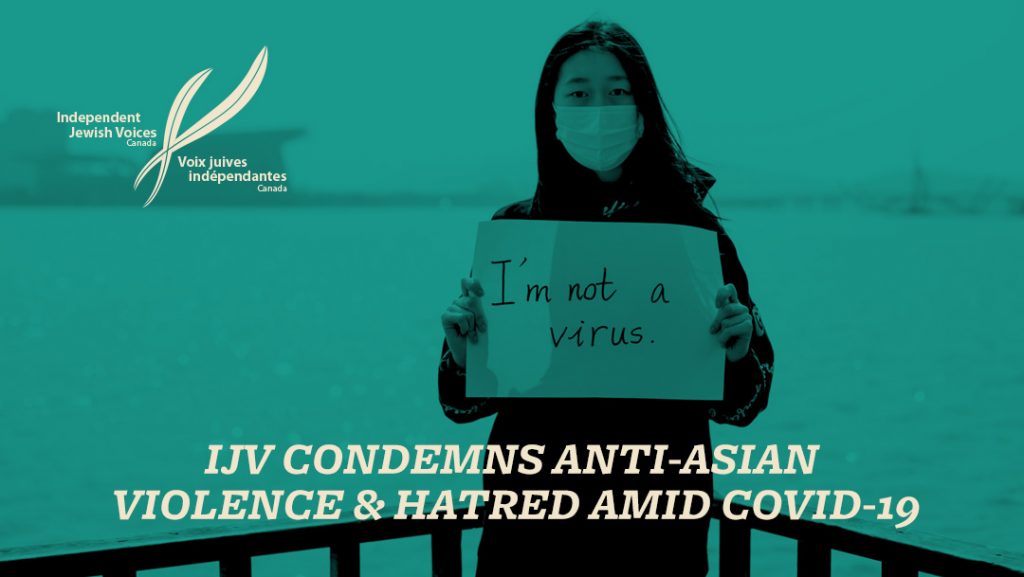 Last week several Asian-Canadian community organizations set up a website www.covidracism.ca to spotlight an uptick of racist  incidents against Asian-Canadians amid the COVID-19 crisis.

Independent Jewish Voices reaches out to our East-Asian-Canadian sisters and brothers who are experiencing a renewed upsurge of violence and hatred.

The new website and other reports bring to our attention several very disturbing incidents: Among 29 recent cases in Vancouver: a 94-year-old Asian man with dementia was thrown out of a shop onto the street; an Asian woman was punched in the head; a bus passenger who came to the aid of two Asian women insulted by a man was beaten by the assailant and a chunk of her hair pulled out; an Indigenous woman who sneezed was attacked verbally in a park. A Saskatoon teen was the victim of racial slurs and a physical attack. One of the contenders for the federal Conservative Party leadership condemned chief public health officer Theresa Tam in racist terms. A Korean man in Montreal was stabbed outside a grocery store. An Asian student in Halifax was told by a passenger to get off a bus.

Members of Canada’s Jewish community have also experienced several attacks. A synagogue in Montreal was recently desecrated. Painted slogans blaming Jews for the contagion have appeared on some buildings. In Quebec, Jews have also been the target of antisemitic scapegoating from prominent political figures for spreading the virus. So Canadian Jews know, or should know, how vulnerable others can be in these times. Yet there have been previous few mentions by institutional Jewish organizations of these attacks on Asians-Canadians.

We note that several of these Jewish organizations have been strongly promoting the International Holocaust Remembrance Alliance’s Working Definition of Antisemitism (IHRA-WDA), which fails to identify antisemitism as a form of racism or prejudice often linked with other expressions of hatred. In the IHRA definition, seven of the eleven examples are not animosity against Jews as Jews, but rather criticism of the State of Israel.

IJV has launched a national campaign against the IHRA-WDA.IJV has put forward our own definition of antisemitism as an alternative to the IHRA’s flawed definition. IJV’s definition of antisemitism states: “Privileging the efforts to combat discrimination against one of these groups, risks further marginalizing the other targeted groups, and undermines solidarity and cooperation among them in fighting their common enemies. Fighting and educating against antisemitism must therefore be part of a larger struggle against all group hatred and discrimination.”

IJV encourages fellow Jewish organizations to declare their solidarity with Asian-Canadians, and to join us in a united struggle against white supremacy and neo-fascism.

Moreover, we encourage all Canadians to be vigilant of racism and bigotry amid COVID-19 and to report anti-Asian incidents to www.covidracism.ca.