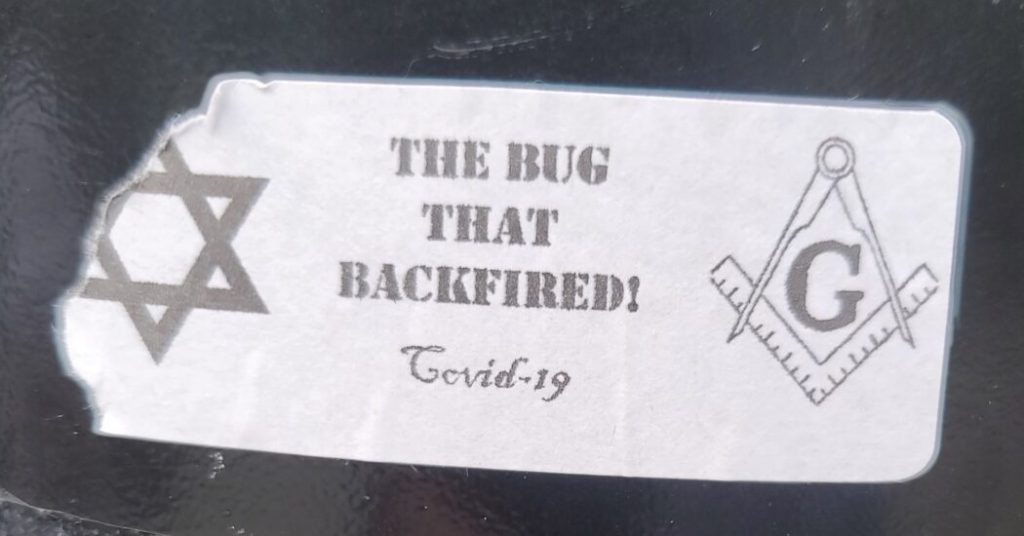 Independent Jewish Voices condemns this spate of hate and is calling on people of good will to report these affronts so that we can monitor their proliferation and messages and take measures to stop them.

The stickers appear to be similar and may be related. The message seems to be that both the pandemic itself and the measures taken to reduce its spread are part of a secret scheme to rob individuals of their freedom. The so-called “Q-Anon” movement, originating in Donald Trump’s US is part of a reaction to the Movement for Black Lives.

Halifax has seen its share of right-wing and white-supremacist hatred of late: acts of anti-Black racism in HRM employment sites, including Fire, Police and Transit. insults to people of colour on Transit, the so-called Soldiers of Odin marching through the north end, the so-called “Proud Boys” (the same group Donald Trump, in the recent presidential debate told to “stand down and stand by”) disrupting a protest at Halifax’s Cornwallis statue, counter-demonstrations against the indigenous treaty fishery.

The proper response to all of this is solidarity – among all the groups targeted: African-Canadians, Indigenous folks, other people of colour, Jews, women, LGBTQ2+ people and immigrants.

In addition, privileging the efforts to combat discrimination against one of these groups, risks further marginalizing the other targeted groups, and undermines solidarity and cooperation among them in fighting their common enemies.

Fighting and educating against antisemitism must therefore be part of a larger struggle against all group hatred and discrimination.