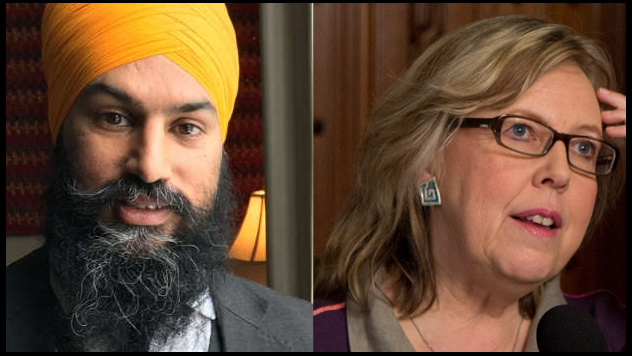 In a statement released last week during a parliamentary delegation to Palestine, May wrote:

“The shooting of unarmed civilians in a peaceful protest along the border between Gaza and Israel is a clear violation of all accepted international norms[…] There is no question about the intentionality of the Israeli military. It has since taken credit for snipers doing exactly what was ordered. Every bullet went where it was intended to go, say the commanders. This claim by the Israel Defence Forces makes it very clear that there was no accidental shooting. No one panicked. This was a systematic plan to murder unarmed civilians.”

“I am shocked by the violence in Gaza. The Canadian government must call on Israel to abide by its responsibilities under international law and call for an independent investigation. The killing, human rights violations and blockade must end.”

IJV spokesperson Corey Balsam called their statements “courageous and principled. We echo the call made by the Green Party of Canada to ’suspend all military trade with Israel’ and call on the NDP and Trudeau government to follow suit.”

Unarmed, tens of thousands of Palestinians have been protesting along the Gaza border in what is being called the Great March of Return. As of this weekend, Israeli soldiers have killed 34 Palestinians and wounded thousands of others, provoking global outrage.

Despite this, establishment Jewish groups have been quick to slam Singh and May, accusing May in particular of “promoting a ‘blood libel’ against Israel” and describing her statements in a sexist manner as “shrill and divorced from reality.”

“IJV condemns these attempts to bully May into silence for criticizing Israel’s ongoing atrocities in Gaza,” said Balsam. “We are grateful to both leaders for their courage in standing up for what’s right, and join them in calling for swift condemnation and political action by the Canadian government.”