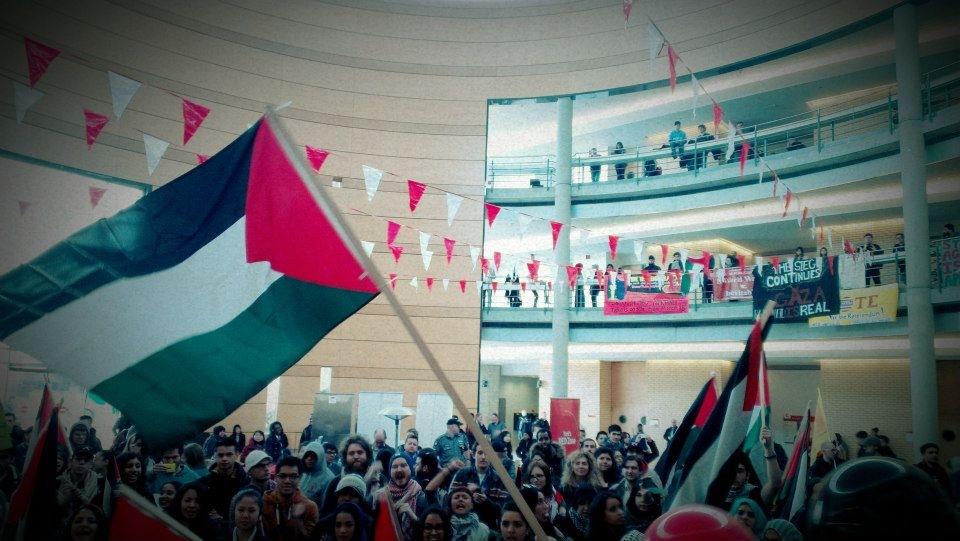 Independent Jewish Voices Canada unequivocally supports courageous Palestinian students and their allies who showed up en masse at York University in Toronto on November 20th to protest a planned presentation by members of Israel’s occupying forces. In particular, we commend the efforts of Students Against Israeli Apartheid (SAIA) for standing up for the dignity of Palestinians and other racialized students in the York community.

IJV is particularly disturbed by the condemnations of this protest that have come down so quickly, and apparently with no investigation, from the highest levels of Canadian government, including tweets from Prime Minister Justin Trudeau, and Ontario Premier Doug Ford. These condemnations are a thinly veiled attempt to continue to silence Palestine solidarity movements and individuals who stand up for human rights.

IJV condemns all forms and acts of anti-semitism wherever they occur. But there is absolutely no documented evidence of anti-semitic attacks or utterances at this event. What Trudeau, Ford, and other supporters of Israel would like to have us believe is that students chanting “Viva Intifada (uprising)” and “Free Palestine” constitute anti-Jewish hatred. There is nothing anti-semitic in calling for the self-determination of Palestinians, or the end to Israeli war crimes.

Students have a right to be angry when occupying army forces show up on their campus, and last week’s protest was a beautiful example of that righteous anger.

Even more serious is that the vacuous condemnations of the demonstrators intentionally ignore the truly racist, violent bigots who showed up in support of the pro-Israel event. Where is the condemnation of the Jewish Defense League (JDL)? It is now evident that the JDL’s members showed up to intimidate and hurl slurs at the pro- Palestinian protestors. They are a well-documented terrorist organization with known ties to the racist and anti-semitic far-right in Canada.

Several eyewitness accounts have said that the violence at the rally was completely instigated by the JDL. As SAIA has said in a statement put out after the rally: “Palestinian students and students who turned up in support were assaulted and violently attacked during the rally. Marshals and non-violent protesters were kicked, spat on, shoved and were subjected to racist, sexist and Islamophobic slurs. One protester was choked with his scarf by a JDL gang member. A T.A. [teaching assistant] was punched in the head and sustained a head injury that landed him in the hospital. An indigenous student was subjected to racial slurs targeting their indigeneity. Other students were sexually harassed and threatened with sexual assault.” These are the acts that should be condemned by our elected officials, but instead (as is often the case with Palestinians), the victims gets blamed for their own oppression.

Moreover, where is the condemnation of the group that organized the event, Herut Canada? Herut is a conservative Zionist organization that aspires to reinvigorate the political movement of former Israeli Prime Minister Menachem Begin. The original Herut party was founded in 1948 by Begin as the political successor to Irgun, a Zionist paramilitary force which committed numerous atrocities, including the infamous Deir Yassin massacre in which as many as 250 Palestinian civilians — including women, children and the elderly — were murdered.  More recently, Herut Canada has gone so far as to attempt to disrupt a workshop against anti-semitism put on by If Not Now Toronto. With this recent York University incident its modus operandi is now clear for all to see.

Even more indicative of the inflammatory nature of this event is the fact that Hillel, a Jewish group based on campuses worldwide, wanted no part in the event and urged Herut not to hold the event. This fact makes it clear that not only were these IDF soldiers not welcomed by the protestors, but that the event also divided York’s Jewish community.

IJV welcomes an open debate on Israel and Palestine. But inviting representatives of an army that routinely violates Palestinian human rights, self-determination, and freedom of expression onto a public university campus is not the way to do it.

IJV will continue to stand with SAIA and all students who stand up for human rights for all. We demand that York University refrain from any disciplinary measures against SAIA, and that the administration and security continue to allow this important organization to operate freely on campus.

Last Wednesday’s event is a stark reminder of the necessity and urgency of the Boycott, Divestment, and Sanctions movement (BDS) in solidarity with the Palestinian people. Our academic institutions need to cut ties with Israeli state institutions, and human rights violators should never be welcomed in places of higher learning. The only way forward for a just and peaceful solution to Israeli war crimes, and to the tensions they cause on Canadian campuses, is for human rights violators to be boycotted and sanctioned, and for the voices of freedom and dignity of Palestinians to be lifted up.