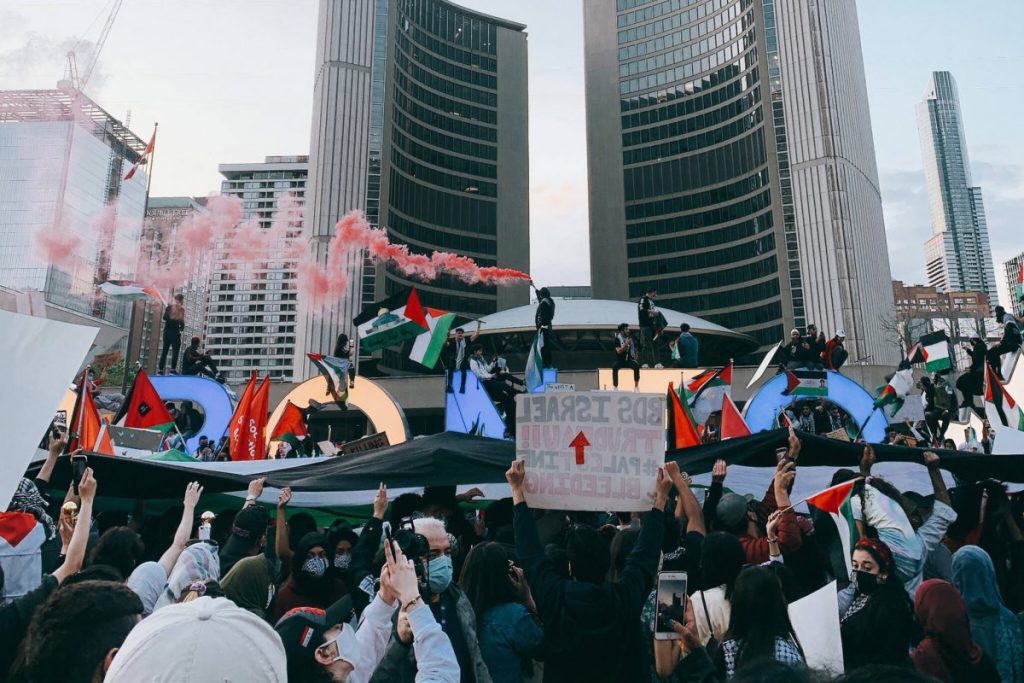 In the wake of a large rally protesting Israeli aggression and violence against Palestinians attended by  well over 10,000 people in Nathan Phillips square on Saturday, May 15, both of you issued statements  alleging that antisemitic violence occurred at the event. Many members of Independent Jewish Voices,  the largest Jewish organization in Canada opposed to Israel’s occupation of Palestinian lands and people, attended that event. The rally was a peaceful gathering. People brought their children, their babies. It was an expression of the community’s outrage about Israel’s treatment of the non-Jews under its control and, in particular, the bombing of Gaza in which over 200 people have been killed and thousands injured. When we identified ourselves as Jewish, we were made especially welcome.

While a video was used to claim that pro-Palestine protesters instigated violence against Jews, evidence has since emerged which demonstrates that the attack was initiated by the Jewish Defence League (JDL), a far-right pro-Israel group whose violence is well-documented and which is listed as a terrorist organization in the USA and outlawed in Israel. The Canadian Anti-Hate Network has verified these facts in their recent statement. JDL members have been arrested for killing and beating Palestinians as well as for bombings and other violent crimes. IJV members have experienced threats of violence and homophobic, sexist and racist verbal assaults from this group for many years. It does not surprise us in the least that the JDL initiated violence at Saturday’s rally. This right-wing militant group attended the event specifically to instigate and derogate a people already suffering so much pain and loss. JDL was documented bringing bleach and weapons to the peaceful rally. They were also observed hurling hateful slurs and water bottles at the rally attendees as police officers stood by and watched.

Independent Jewish Voices and its hundreds of members in Toronto is outraged that you, as our elected representatives, chose to imprudently issue a statement accusing protesters of antisemitic violence without a moment’s hesitation to check the facts. Knee-jerk accusations of antisemitism are dangerous for Jews and often provoke and encourage anti-Muslim violence and racism. Your statements were beyond irresponsible. We understand that these responses are often influenced by Zionist lobby groups such as B’nai Brith Canada, the Centre for Israel and Jewish Affairs, Friends of the Simon Wiesenthal Centre and the UJA Federation of Greater Toronto which claim to speak in the name of all Jews. They do  not, however, speak for the thousands of us in Canada who are horrified at what Israel is doing in our names. On Saturday, we stood in solidarity with Palestinians, and we were joined by many others from  our Jewish community.

As of today, neither of you has issued a retraction of these false allegations despite the ample evidence that violence was in fact initiated by the JDL and those who support them. IJV Toronto demands an immediate retraction of your statements which were prejudicial and completely unfounded. Making false claims of antisemitic behaviour undermines the struggle for justice for Palestinians, and ironically puts Jews at real risk from antisemitism. The time to correct the record is now.