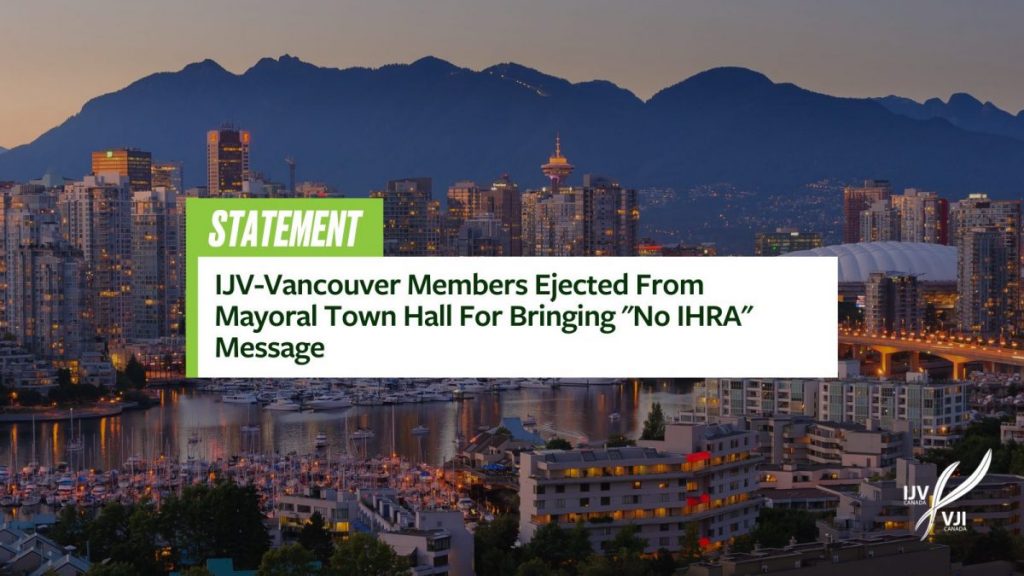 A few members of Independent Jewish Voices Vancouver attended a mayoral town hall event September 7th at Temple Sholom hosted by the pro-Israel lobby group CIJA (Centre for Israel and Jewish Affairs) and S.U.C.C.E.S.S.. During the “Fighting Racism and Hate” section, mayoral candidate Ken Sim spoke about his support for the dangerous and controversial IHRA definition of antisemitism, at which point the IJV members stood up with signs that read: “We are also members of the Jewish community,” “No to IHRA: criticising Israel is not antisemitic,” and “Israel commits apartheid, says: B’Tselem, Human Rights Watch, Amnesty International.”

IJV opposes the IHRA definition because, in its examples, it conflates criticism of Israel and Zionism with antisemitism. While we denounce antisemitism, we also support dialogue, discussion, and criticism of Israel’s violent settler-colonial acts. Over the last few years, international and Israeli organizations have published reports recognizing that Israel practices apartheid against Palestinians. We are concerned about how the adoption of the IHRA will limit and even punish this type of reporting and accountability.

At the introduction to the town hall, Rabbi Dan Moskovitz from Temple Sholom explained how a synagogue is many things, including a sanctuary. Synagogues are places of refuge and welcome. However, within seconds of us peacefully standing with our posters, that same rabbi errupted, shouting at us: “Not in my house!” Other audience members at the town hall joined him in heckling us within this sanctuary. A person affiliated with Fred Harding’s NPA mayoral campaign even tore the poster out of one of our member’s hands. We were promptly escorted out of the town hall. On our way out, one of our members, an Israeli Jew, called out, “I used to attend this synagogue and the intolerance and anti-Palestinian racism drove me out!”

As we were summarily escorted out of the building, one of the attendees followed us out  and said “They had no right to treat you that way.  This is a synagogue”. She then listened attentively to the reasons for our intervention and agreed that our position should have been heard. We were shocked at the anger displayed towards us particularly from the rabbi who espouses discussion reconciliation and tolerance – of course as long as it doesn’t concern Palestinian human rights.

Vancouver already voted against adopting the IHRA in a 2019 City Council meeting. Montreal and Calgary made the same decision. Let’s not go backwards.