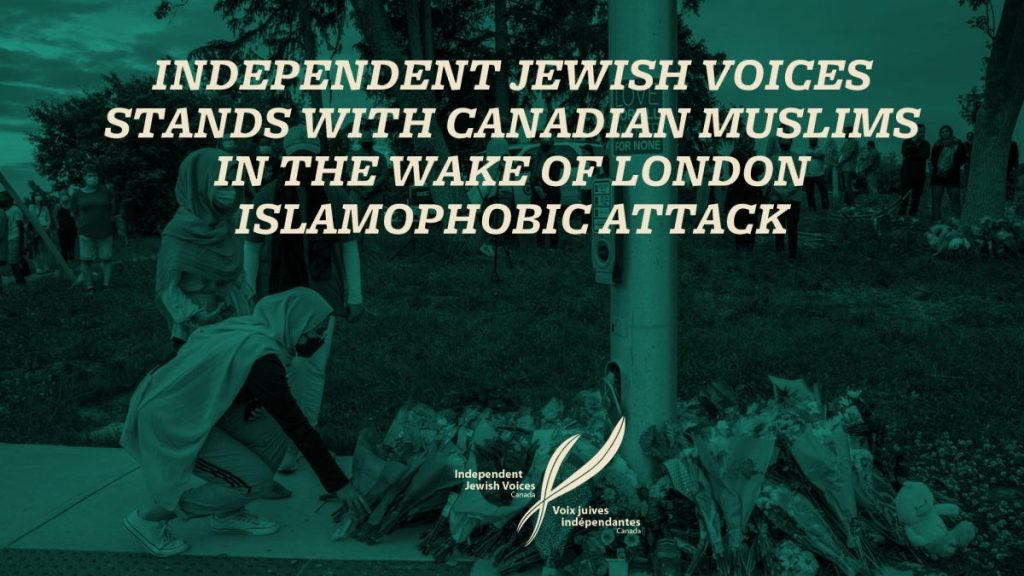 London, ON, June 8, 2021 – Independent Jewish Voices Canada (IJV) is extremely saddened to hear of the targeted Islamophobic murder of four Muslim members of London’s community on Sunday evening. We extend our heartfelt condolences to our siblings in the London Muslim community, and to all those who knew the deceased family.

“This is beyond horrific. We stand with the Muslim community of London, and people across the country who are grieving from this heinous act,” says Davita Guslits, a member of IJV London. “We must name Islamophobia and white supremacy when they occur, and take real steps to end the normalization of both in Canadian culture. Attacks like these do not occur in a vacuum. May the memories of the victims be a blessing.”

London Police report that the family of pedestrians were targeted and killed in an apparently intentional anti-Muslim attack. Such circumstances merit thorough hate crime and terrorism investigations. Independent Jewish Voices’ London chapter encourages local authorities to treat this as a hate crime.

Members of IJV join others in the community in mourning the four family members (ages 15 to 74) who were murdered in this hateful way. We wish the 9 year old boy who is injured and in hospital a full and prompt recovery. We extend our solidarity and support to everyone in the community who feels threatened by this act of terror and bigotry.

“This family should have been able to walk peacefully in their neighbourhood. It is truly a tragedy that their freedom, safety, and lives were stolen,” said Sara Rans, a member of IJV London. “We are heart-broken for the Muslim community in London. We stand side by side with you, in solidarity against hate and Islamophobia, and join in your demands for justice in our community and everywhere.”

The London Muslim Mosque will be holding a socially-distanced vigil at the Mosque on Tuesday, June 8, at 7 pm. IJV encourages all who are able to attend. We also support the call of the National Council of Canadian Muslims (NCCM) for an immediate national action summit on Islamophobia, as well as for people to donate to the Sadaqa fund in memory of the deceased.