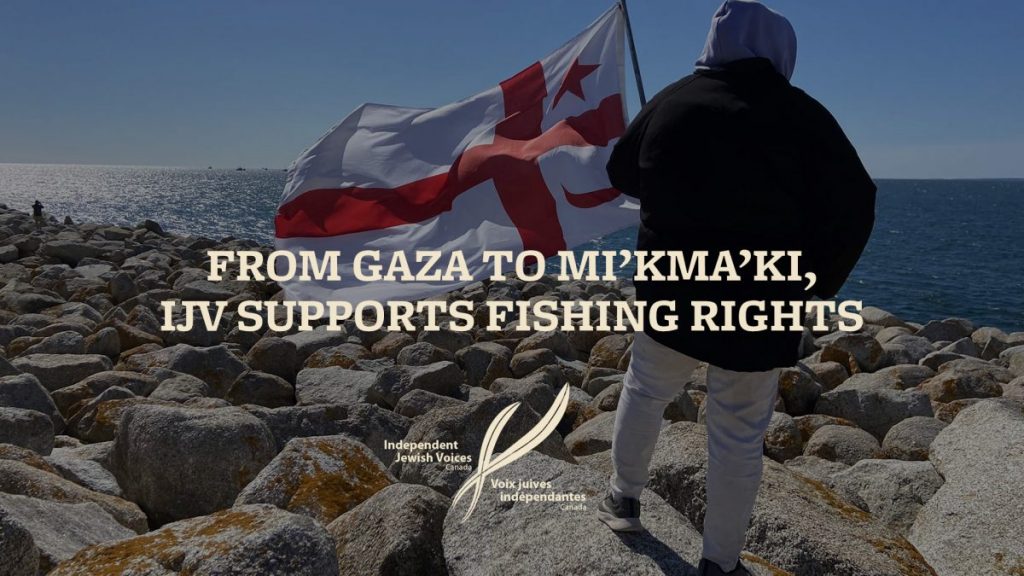 Independent Jewish Voices Canada (IJV) affirms our support for the Mi’kmaq people and the Sipekne’katik First Nation who are currently engaged in a standoff in Nova Scotia to affirm their treaty rights to fish on their traditional territory.

As a Jewish group that stands in solidarity with the Palestinian people, the struggle of Mi’kmaq fishers bears important ressemblance to the plight of fishers in the Israeli-occupied Gaza Strip.

In the early mornings, Hassan Zidan and Zakaria Bakr from Gaza get into their fishing boats and brave Israeli gunboats in the Mediterranean Sea enforcing a blockade. That cordon includes a 6 to 15 nautical mile fishing zone (in contravention of the 20 nautical mile limit allowed under the Oslo Accords; sovereign nations also have a 200 nautical mile “exclusive economic zone.”)

Zidan, Bakr and their fellow harvesters are routinely subject to harassment and sometimes injury by Israeli shells and vile-smelling “skunk water”, and having their boats confiscated, even within that zone. They are calling for international protection so they can feed their families and neighbours and pursue a moderate living.

In the early morning of September 17, Cheyenne Francis, Robert Sylliboy and fellow fishers from the Sipekne’Katik  Mi’kmaq First Nation, dropped lobster traps into St. Mary’s Bay in southwest Nova Scotia. They were exercising their 260-year-old indigenous treaty right, affirmed by the Supreme Court of Canada in 1999, to fish the water. Almost immediately, non-Indigenous commercial fishers began cutting buoy lines, hauling up and stealing Mi’kmaq traps, surrounding Mi’kmaq boats, and shooting in their direction with rifles and flare guns. They had also vandalized Mi’kmaq cars.

The Mi’kmaq fishers are calling for protection and vindication by the Federal Department of Fisheries and Oceans (DFO), which up to now has taken a hands-off approach. Twenty-one years ago the top court cited a treaty of 1752, ruling that indigenous people were entitled to make a “moderate livelihood” from land and sea. A subsequent ruling confirmed that, with the proviso that the fishery could be regulated by the federal government after consultation with Indigenous groups. But to date this has not been done in Nova Scotia fisheries.

What do these two situations have in common? Lots.

In both cases settler-colonialists are restricting access to resources, especially those of the sea, to punish subject populations and restrict their ability to earn a livelihood. In both cases, intimidation and violence are used against people affirming their self-determination. In both cases that punishment flies in the face of the law. In both cases, protective agencies are shirking their responsibilities.

Assailants of the Mi’kmaq fishers claim to be concerned about harm to lobster stocks. But Megan Bailey, a Canada Research Chair in Integrated Ocean and Coastal Governance at Halifax’s Dalhousie University says that the science simply doesn’t support that argument. Moreover, the Sipekne’Katik nation is determined to self-regulate in the interests of the health of the entire fishery.

What this is really about in both cases is collective punishment of colonized peoples and social control.