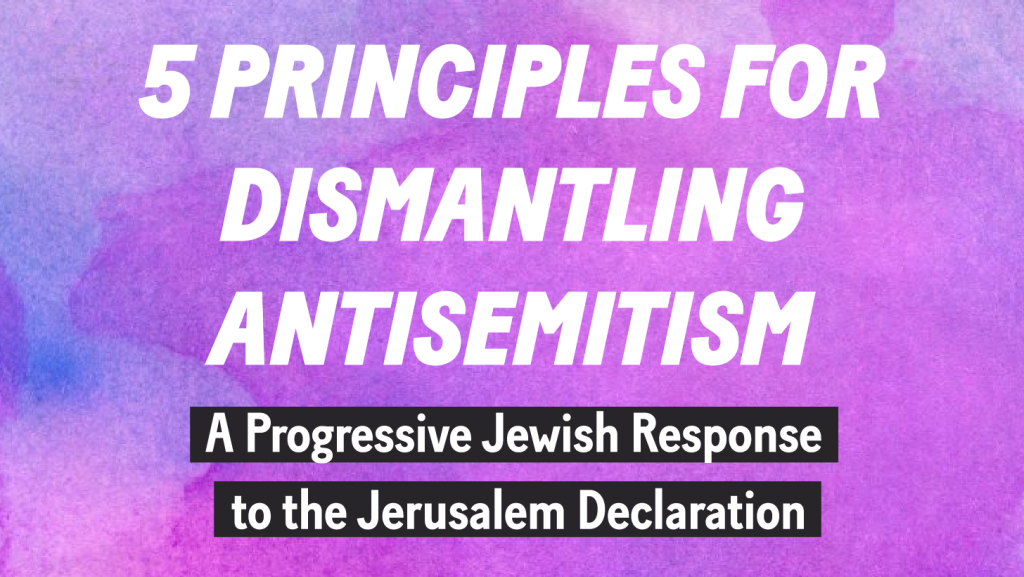 We believe in a world where we are all safe and cherished—a world without racism, without antisemitism, and without Islamophobia. As fascist, racist, and authoritarian governments and political parties increasingly amass power around the world, we are more committed than ever to the work of building a world where justice, equality, and dignity are accorded to all people without exception.

We write this statement with urgent concern about the ongoing attempts of the Israeli government to evade accountability for its human rights abuses and violations of international law by levying accusations of antisemitism at Palestinians and those who advocate for Palestinian rights. Not only does this silence Palestinians and their advocates, but it also jeopardizes Jewish safety and the struggle to dismantle antisemitism.

The most prominent example of this dangerous campaign is the attempt to impose the flawed and widely discredited International Holocaust Remembrance Alliance (IHRA) working definition of antisemitism on governments, public institutions, universities, and civil society. The IHRA definition is not designed to protect Jewish communities from the rising bigotry and racist attacks we face,  predominantly carried out by white supremacists. Instead, it has been employed in many countries as a bludgeon to suppress advocacy and academic freedom. Scores of Palestinian, Israeli, civil society, and human rights organizations from across the globe, as well as academics, writers, and activists—including one of the IHRA’s original authors—have condemned its anti-democratic and repressive impact.

In this context, we welcome the Jerusalem Declaration on Antisemitism (JDA) as a useful corrective to the dangerously flawed IHRA definition. If an institution believes it needs a definition, the Jerusalem Declaration is a vastly improved replacement for the IHRA. Drafted and endorsed by many of the world’s most preeminent Jewish studies scholars, it opens space for debate, champions freedom of speech, and refutes the most misleading aspects of the IHRA definition. However, in attempting to remedy the deceptive claims of the IHRA definition, the JDA falls into the trap of situating Israel-Palestine at the centre of conversations about antisemitism.  If the drafters required this special scrutiny to respond fully to IHRA, then they should have included representative Palestinian perspectives and analyses in shaping the document, without which the JDA remains incomplete. This disproportionate focus risks contributing to the intense policing of discourse on Israel-Palestine, and distracting from the real dangers we face as Jews today from white supremacists and the far-right.

Most importantly, we are acutely aware that defining antisemitism does not actually do the work of dismantling antisemitism. Legislating a static definition for any particular form of bigotry weakens our society’s efforts to combat discrimination across different contexts and over time. Instead of trying to codify definitions of antisemitism, we call on progressives around the world to commit to dismantling it alongside all forms of oppression and bigotry.  To create safety and freedom for all people, including Jewish people, we offer these principles and practical steps:

Situate your work to dismantle antisemitism within the broader struggle against all forms of racism and oppression.  Antisemitism is embedded in white supremacy, and is part of the machinery of division and fear used to keep us isolated and vulnerable—the same machinery that is used to target Black people and other people of color, people who are Muslim, immigrants, Indigenous communities, and others. Isolating antisemitism ignores the central threats faced by these communities under white supremacy, erases the lived experiences of Black Jews and other Jews of color, and atomizes a struggle that must be united to succeed. Act from the principles that oppression is intersectional and that justice is indivisible.

Refuse and challenge fascist, white nationalist, and far-right ideologies leading to murderous violence. These conspiratorial and dangerous beliefs are wielded to divide and sow fear across communities, and to reinforce and maintain white supremacy.  Cede no ground to the leaders, institutions, and politicians who promote these ideologies and gain power by breeding violent antisemitism, racism, Islamophobia, and xenophobia.

Institute policies and practices that actively embrace, not just tolerate, cultural and religious diversity. White Christian hegemony structures many of our societies, lives, relationships, and institutions. By framing all communities that are not white and Christian as the “other,” this feeds exploitation, hatred, and discrimination.  Push back on this harmful reality by assessing your community or organization’s policies and building affirming, inclusive spaces where Jewish, Muslim, Sikh, Hindu, Buddhist and all other faith communities can thrive and belong.

Establish racial justice, religious inclusion, and social equity as central pillars for setting policy and making decisions—in organizations, institutions, and legislation. Until our entire society is transformed to the point where racism and antisemitism are truly eradicated, it is up to all of us to create open spaces, rooted in the fabric of daily practice, for anti-racist educational initiatives, curriculums, and frameworks. If we do not make undoing white supremacy, including anti-Black racism, antisemitism and islamophobia, a part of our daily lives, we will never achieve the just future we want.

Jewish Voice for Peace (US)

Boycott from Within (Israeli citizens for BDS)

Jewish Voice for a Just Peace in the Middle East (Germany)

Jews against the Occupation (Australia)

As the Spirit Moves Us (a Jewish Justice organization)