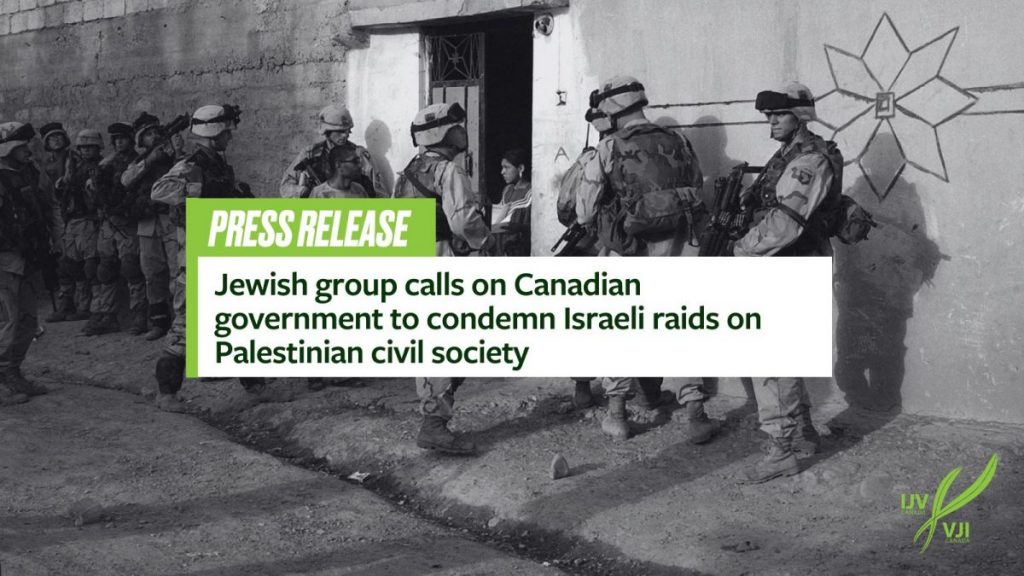 August 18, 2022 – Independent Jewish Voices Canada (IJV) is calling on the Canadian government to condemn Israeli government raids on the offices of seven civil society organizations in Palestine last night. The raids come ten months after Israel designated six of these organizations terrorist groups, although it has failed to provide any substantial evidence to support its claims.

Now, Israel has broken into, welded shut, and in many cases seized documents and other materials from the offices of UN-affiliated human rights group Al-Haq, Addameer Prisoner Support and Human Rights Association, the Bisan Center for Research & Development, the Palestine branch of Geneva-based Defense for Children International (DCIP), the Union of Palestinian Women’s Committees and the Union of Agricultural Work Committee. They also raided the Union of Health Work Committees (UHWC), who were not included in the original six groups designated as terrorist organizations.

The raids also came several hours after a 20 year old Palestinian man, Waseem Nasr Khalifa, was killed during an Israeli raid in the occupied West Bank city of Nablus.

“Israel’s crackdown on these organizations is a blatant anti-democratic attempt to delegitimize and ultimately silence Palestinian civil society,” said IJV Communications and Media Lead Rowan Gaudet. “This motive is made especially clear by the attack on Defense for Children International–Palestine which is investigating the killings of some 37 Palestinian children this year alone.”

In July, the foreign ministries of Belgium, Denmark, France, Germany, Ireland, Italy, the Netherlands, Spain and Sweden jointly investigated Israel’s designation of these organizations as terrorist groups and came to the conclusion that the charges were unsubstantiated. The decision has also been protested by more than twenty Israeli human rights groups and the UN High Commissioner for Human Rights Michelle Bachelet, among others.

In December 2021, Foreign Affairs Minister Mélanie Joly said she was in contact with Yair Lapid (then foreign minister), who she claimed to have asked for “clarity” on the situation.

“The government has had ample time to seek clarity” continued Gaudet. “It’s time for Canada to take action. We call on the government to immediately condemn Israel’s attempted shut down of Palestinian groups who are exposing and opposing its well-documented system of apartheid.”

“Just this past June, Justin Trudeau reiterated that Canada and Israel ‘are close friends bound together by shared democratic values’,” said Gaudet. “Does this mean we can expect Canada to shutter the offices of Canadian human rights and Indigenous groups and seize documents they’re using to investigate our government? Or will Canada finally condemn these actions and join with its European allies in rejecting Israel’s claims?”