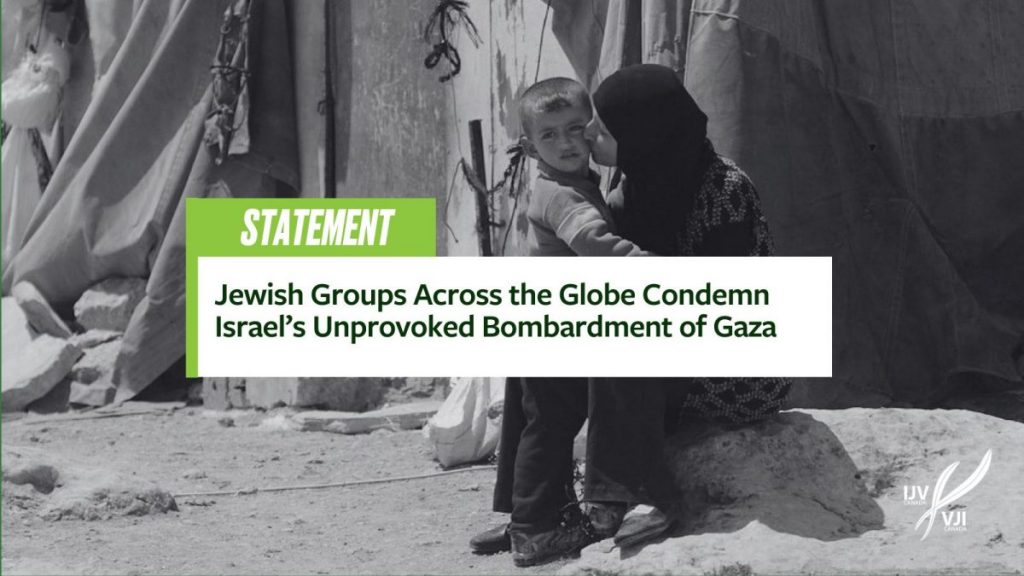 We, member groups of the International Jewish Collective for Justice in Palestine, are filled with sorrow and outrage at Israel’s unprovoked aerial bombardment of the community of Gaza, Palestine. We condemn it and its dishonest rhetoric.

This is not a dispute between two sides. An occupying military is attacking an occupied, blockaded community. Israel called this a ‘pre-emptive’ assault, although it provided no evidence for its just-in-case bombardment of crowded cities. Israel has no legal right to military aggression to bolster a blockade which is, itself, in violation of law. This has nothing to do with Israel’s self-defense. We saw with our eyes that it is occupied Gaza that needs defense, and has the right to defend itself.

In three days, Israel killed 44 Palestinians including 15 children, and wounded 350. Scores of Gazan families are homeless and 650 homes were damaged in just the first 24 hours. No Israelis were killed. Beginning on Friday August 5, Israel inflicted gratuitous collective punishment by closing the crossings to Gaza, withholding food, medical supplies and fuel from two million people. In the extreme heat of August, Gazan Palestinians endured bombardment without lights, refrigeration, or pumps to bring water into their homes. Medical facilities cannot function without electricity.

Israel chose to attack a besieged community on Tisha B’Av – a day when Jews lament our losses by siege, two thousand years ago. This choice shames the religion that Israel appropriates to launder the image of its settler colonialist project.

While Gazans endured bombardment, we also wage a battle of words. We reject the rhetoric that would blame Palestinians for Israel’s policy choices. Israel is responsible for its aggression and for every life it takes. The communities of southern Israel say they want normalcy – where is Gaza’s normalcy? Israelis have spent a few days in bomb shelters – Gazans have spent 17 years behind blockade walls. Israel says that no state would accept rockets – tell us which authority would accept bombardment of its cities without resistance. We, in each of our countries, need to counter these narratives and challenge the media outlets that perpetuate them. Gaza is Occupied Palestine: speak to that. There’s your cause.

We call on our governments and the United Nations to condemn and sanction this aggression, to support and invest in the International Criminal Court’s investigations of all violations of law.

We call for Israel to immediately lift its 17-year siege. Let Gazans breathe, walk, and sleep undisturbed today, as is their right. Real peace will only be achieved with justice. We call for meaningful international pressure that demands a solution based on the human and political rights of all who live between the river and the sea.

Signed by these member groups of the International Jewish Collective for Justice in Palestine: