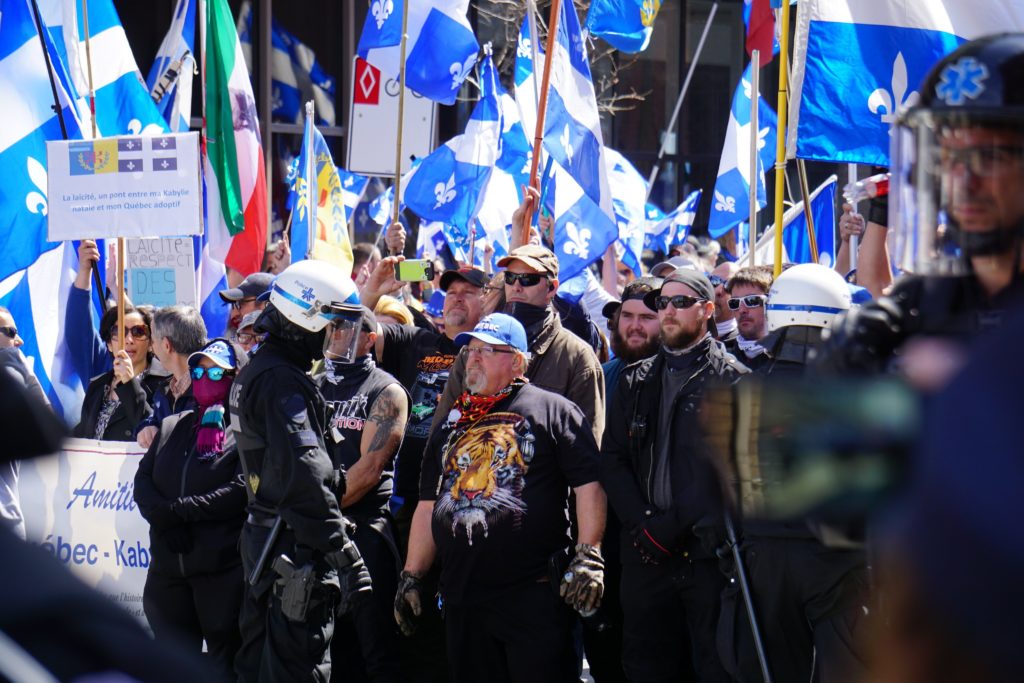 On Saturday, July 27, Independent Jewish Voices (IJV) Montreal participated in a counter-protest in Trois-Rivières, Québec, against a new white supremacist umbrella group, la Vague Bleue*. Violent and racist hate speech was openly expressed by Vague bleue militants, including an explicit call to arms by Diane Blain, a woman affiliated with several established white supremacist groups. Blain told the crowd, “We have so many enemies in Quebec — the federal government, federalist journalists, the Muslims, the Jews, the English, the Sikhs […].”

Despite the statements of Quebec’s premier, François Legault, that intimidation and harassment have not increased since “secular” Bill 21 was passed, which bars those wearing “religious symbols” from certain public sector employment, it is clear that racism and intolerance are on the rise. Vague Bleue members openly express hate and threats against people of colour, and ethnic and religious minorities, and display their neo-Nazi and white power paraphernalia — all while claiming not be racist. Upon tabling Bill 21, Legault proclaimed, “This is how we live.” The premier’s blatant cultural nationalism fuels the extremist white supremacy that he tries to deny.

IJV stands with those striving for inclusion, compassion and solidarity for all peoples, no matter their race, religion or background. From Israel’s occupation and siege of Palestine to Canada/Quebec’s Islamophobic laws, we stand in solidarity with targets of white supremacy.

We urge you to do the same.

IJV members recognize that we can only be effective in our fight against antisemitism when we fight all racism and bigotry. We join in solidarity with the efforts of other QuebecoisE, Canadians, minority communities, antifascists and anti-racists.