Israel’s Annexation Plan is a Continuation of the Nakba 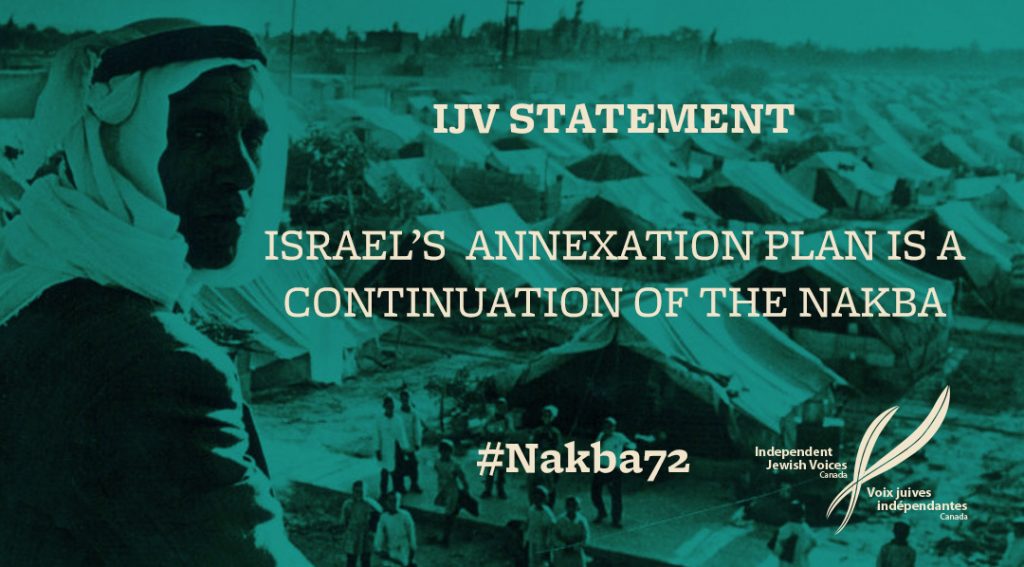 May 15, 2020 – Today, Independent Jewish Voices Canada is standing with Palestinians around the world to mark Nakba Day. Nakba (Arabic for “catastrophe”) Day is observed in Palestine and around the world to commemorate the displacement of hundreds of thousands of Palestinians surrounding Israel’s declaration of independence in 1948. According to the United Nations High Commissioner for Refugees (UNHCR), the creation of the Israeli state created one of the worst refugee crises in human history, the impacts of which are still being felt by Palestinians today.

The Nakba was not a singular event, but a process which continues to this day, 72 years after it began. The commemoration of Nakba Day comes this year as Israel prepares to swear in its new annexation government under the leadership of its corrupt and legally-embattled Prime Minister Benjamin Netanyahu. With the blessing of the Trump administration in the USA, Netanyahu and his deputy Prime Minister, Benny Gantz, are moving forward to illegally annex parts of the occupied West Bank by as early as July 1st, knowing that the clock is ticking before Trump faces re-election in November.

Israel’s plans to unilaterally annex parts of the West Bank have been roundly denounced by the European Union and several European states. Certain countries including France, Belgium, Spain and Ireland have already begun discussing sanctions. In the United Kingdom, over 130 parliamentarians from across the political spectrum signed an open letter to PM Boris Johnson demanding that he impose sanctions on Israel if it moves forward with its nefarious plan. IJV demands that the Canadian government immediately follow suit by applying the maximum pressure on the Israeli government to reverse its plans. A failure to do so would be a slap in the face to any notion of international law.

IJV is pleased to see that some Members of Parliament in Canada are taking action. We are encouraged by the actions of Green Party MPs who sent a letter to PM Justin Trudeau demanding that he oppose this land grab by imposing sanctions. The NDP, for its part, also issued a statement on Wednesday urging the Canadian government to condemn any move towards annexation. While IJV applauds the NDP for taking this important position, we implore them to find the courage to demand sanctions against Israel. Without a call for sanctions or other consequences for Israel’s brazen violations of international law, any statement of condemnation simply lacks teeth.

On Saturday, May 16, IJV will be marking Nakba Day by joining with our allies from several organizations for an online rally. Amongst several demands, we will be joining our voices together to call for immediate action against Israel’s annexation plans, the lifting of the siege on Gaza amidst the COVID-19 crisis, and the right of return for Palestinian refugees. All are welcome to attend.