On the 74th Anniversary of the Nakba, Let’s Come Together Against Apartheid 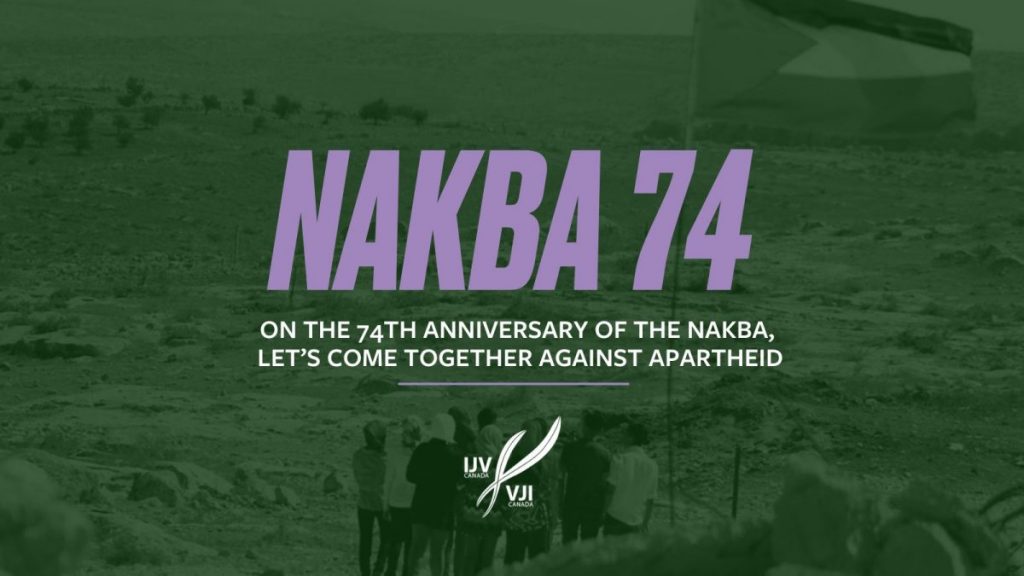 This year, like every year, Palestinians in Palestine and throughout the diaspora will mark May 15th as Nakba Day (“catastrophe” in Arabic). It is a day that marks Israel’s declaration of independence in 1948, and the ethnic cleansing of at least 750 000 Palestinians that took place between 1947-49.

The Nakba is sadly not a tragedy confined to history. It is alive and continuing today with Israel’s daily violence, displacement, and apartheid inflicted upon Palestinians. Echoes of the Nakba were felt throughout Palestine last week, when the Israeli high court of justice ruled to give a green light to the ethnic cleansing of Masafer Yatta. Masafer Yatta is an area with 2800 Palestinian residents in the south of the occupied West Bank, who now face what could be the largest mass-expulsion of Palestinians since 1967.

This daily violence cannot continue. This year is the 74th year of the Nakba, and that is 74 years too long. As Jewish people of conscience, we cannot allow Israel to carry out these atrocities and perpetuate the Nakba in our names.

The situation is tragic, yet hopeful at the same time. Hopeful because the world is starting to wake up to the reality of these injustices. Over the last couple of years, the world’s leading human rights organizations have come to the conclusion that Israel is practicing apartheid. Here in Canada and around the world, members of parliament, human rights experts, academics, artists, Palestinians, Jews and people from all walks of life are coming together against apartheid. You can join them by signing the Together Against Apartheid pledge.

On Thursday, May 12th at 7pm ET, please join us for an online commemoration of the Nakba, featuring personal stories and discussion. IJV’s national coordinator Corey Balsam will be one of the many wonderful speakers at this event.

Then on May 14th-15th, Nakba Day demonstrations and rallies will be happening in several Canadian cities. We encourage you to attend, and raise your voice in solidarity with Palestine. Different IJV chapters will have contingents in many of these rallies, so come look for IJV banners or placards, and march with us!

List of Nakba Day rallies across Canada (all times are local)