New Campaign Brings Canadians Together Against Apartheid in Israel 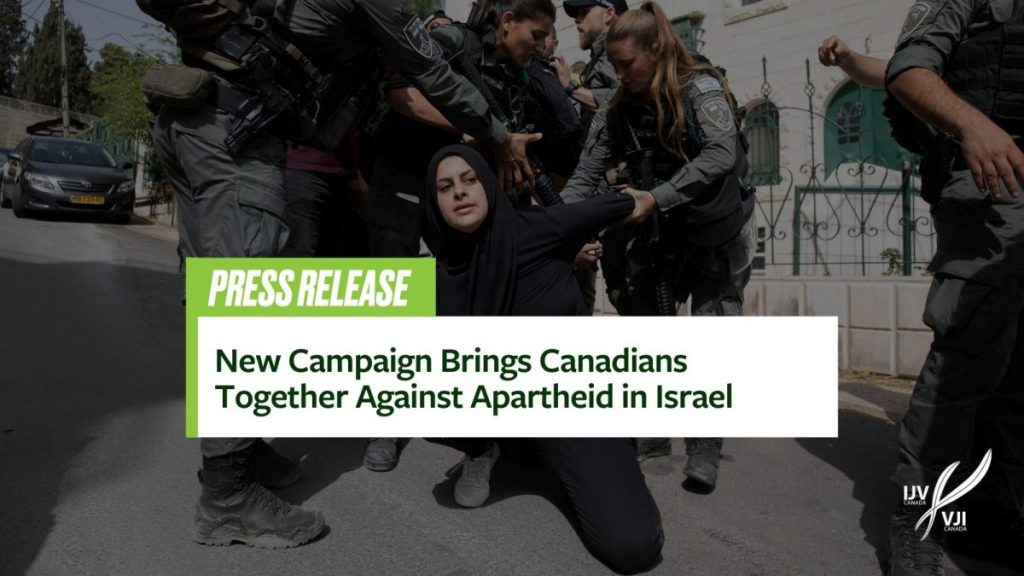 March 21, 2022 – Independent Jewish Voices (IJV) Canada launched a new national campaign this morning, Together Against Apartheid, aimed at educating and empowering people across the country to end Israel’s oppression against Palestinians. With last month’s report from Amnesty International, there is a growing international consensus that Israel’s treatment of Palestinians amounts to the crime of apartheid under international law.

“Just as the world came together to help bring an end to South African apartheid a generation ago, it is now our generation’s turn to come together against Israeli apartheid,” says Aaron Lakoff, IJV’s Communications and Media Lead. “Jewish people, both in South Africa and throughout the world, played a proud role in resisting the South African regime’s apartheid policies. Today, more and more Jews, and many prominent Jewish Israeli figures, are standing up against Israeli apartheid. We’re proud to launch a campaign in Canada that brings Jews, Palestinians and people of all walks of life together to stand for justice in Israel-Palestine”.

The campaign was unveiled yesterday with an online rally. Hundreds gathered to hear speeches from several prominent Israeli, Palestinian and Canadian figures, including Winnipeg Centre Member of Parliament Leah Gazan.

“Together Against Apartheid is an inspiring example of Jewish solidarity with the Palestinian people,” says Gazan. “It’s time for our federal government to put itself on the right side of history by standing up for justice and holding Israel accountable for its violations of Palestinians’ human rights”.

The Together Against Apartheid campaign has two major goals: to educate Canadians on the realities of Israeli apartheid, and to empower Canadians to take action in their own communities by establishing of Apartheid Free Zones. An Apartheid Free Zone is a space of pro-active solidarity with the Palestinian people which seeks to cut ties of complicity with Israeli violations of Palestinian human rights. Last May, at the height of Israel’s bombing campaign in Gaza, a grocery coop in London, Ontario became the first business in Canada to declare itself as an Apartheid Free Zone. The Together Against Apartheid campaign aims to spread such initiatives across Canada.

“The world’s major human rights organizations, faith leaders, political leaders, and millions of people around the world agree that Israel is practicing apartheid. There simply isn’t any doubt about it anymore,” continues Lakoff. “The question now becomes, ‘what can we as Canadians do to stop it?’ It is unacceptable for the Canadian government to continue providing support to the Israeli government while it practices apartheid. The Together Against Apartheid campaign gives Canadians tools to help overcome this impasse, and to get involved in the movement for true justice and peace in Israel-Palestine”.