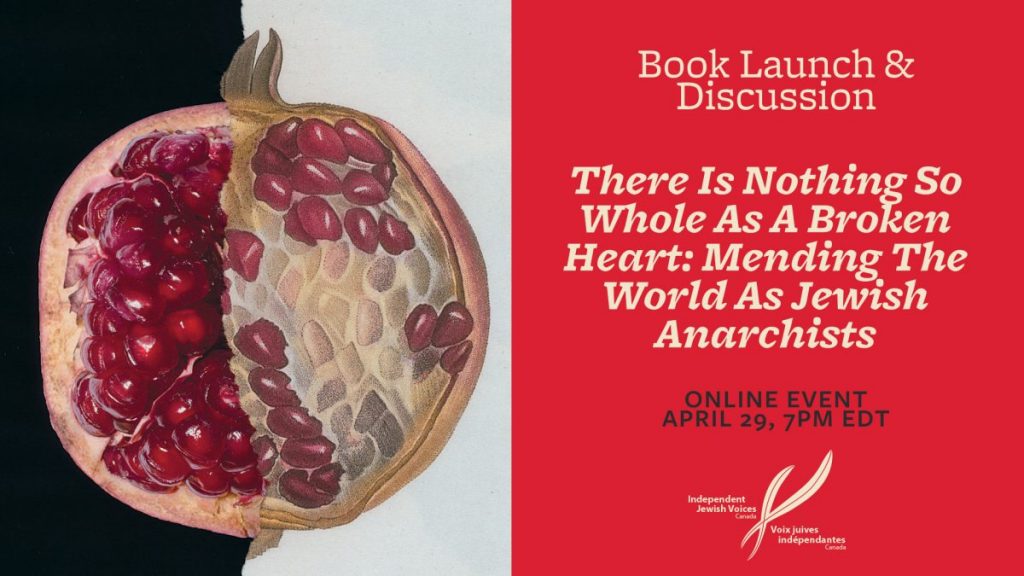 Join Independent Jewish Voices Canada for the launch of the brand-new anthology of contemporary Jewish anarchist writing, There is Nothing So Whole As a Broken Heart: Mending The World As Jewish Anarchists, available now on AK Press!

The event, revolving around the theme of “mending the world,” will feature reflections from editor Cindy Milstein as well as the following contributors:

Aaron Lakoff is a media maker, DJ, and community organizer from Montreal. He is the Communications and Media Lead for Independent Jewish Voices Canada.

Ami Weintraub is a Jewish educator and anarchist living in Pittsburgh. They help organize Ratzon: Center for Healing and Resistance, a place for queer folks, youths, Jewish folks, and those from marginalized backgrounds to mend their jagged edges.

Malcah is an Ashkenazi Jewish anarchist living in waspy Kingston, Canada, occupied Haudenausonee and Anishinaabe land. She has been active within locally based antiauthoritarian projects for the last fifteen years.

Shoni is an anarchist Jewish representative of Neptune on earth.

Avi is a klezmer purveyor committed to yiddishkeit, anarchism, and cooking for community. He lives in Montreal on unceded Kanien’kehá:ka & Anishnabe territory.

Note: A closed captioning service will be available for this event! To enable, simply click the “CC” button at the bottom of your screen on Zoom.

About There is Nothing So Whole As A Broken Heart

“A poem and a love note, a prayer song and a protest, an attempt to mend a burning world with the best of Jewish, anarchist, and Jewish anarchist traditions.” —Dan Berger, author of Captive Nation: Black Prison Organizing in the Civil Rights Era

Through stories at once poetic and poignant, There Is Nothing So Whole as a Broken Heart offers a powerful elixir for all who rebel against systemic violence and injustice. The contemporary renewal of Jewish anarchism draws on a history of suffering, ranging from enslavement and displacement to white nationalism and genocide. Yet it also pulls from ancestral resistance, strength, imagination, and humor—all qualities, and wisdom, sorely needed today. These essays, many written from feminist and queer perspectives, journey into past and contemporary trauma in ways that are humanizing and healing. They build bridges from bittersweet grief to rebellion and joy. And via concrete illustrations of how Jewish anarchists lovingly transform their own ritual, cultural, and political practices, they clearly illuminate the path toward mending ourselves and the world.

Cindy Milstein is author of Anarchism and Its Aspirations and editor of the anthologies Taking Sides: Revolutionary Solidarity and the Poverty of Liberalism; Rebellious Mourning: The Collective Work of Grief; and Deciding for Ourselves: The Promise of Direct Democracy.

We encourage people to look for the book at your favourite local independent bookstore or anarchist infoshop. Encourage them to order it if they don’t already carry it!

For mail order, folks living in Canada can order it through Kersplebedeb Books (at Canadian shipping rates) here.

For folks in the USA or overseas, the book can be ordered directly from the publisher, AK Press.