On Passover, We Fight For Everyone’s Liberation 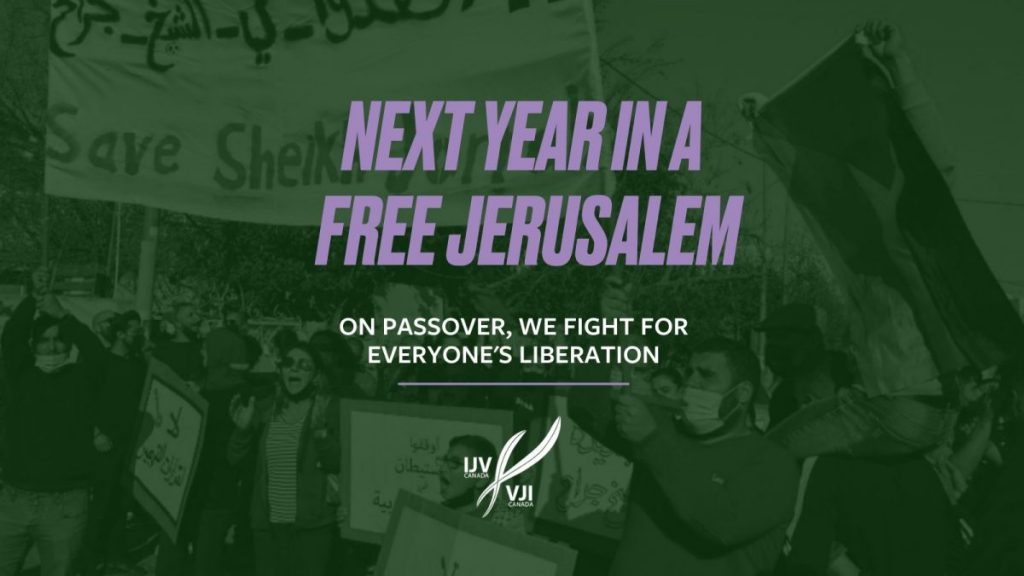 The Jewish holiday of Pesach (Passover) starts this evening (April 15), and runs until April 23rd. To everyone celebrating, I wish you a very happy Pesach!

I very often start my Pesach Seders with the verse:

Are you not like the Cushites to Me, O Israelites? said Hashem.

Did I not bring up Israel from the land of Egypt,

and the Philistines from Crete

and Aram from Kir?

Then I usually go on to lead a Seder that tells the story of the struggle for liberation of the Palestinian people. Amos 9:7 to me clearly means that God is invested in the liberation of all peoples. It is one of my most favourite verses of the whole Bible.

When I worked for the Israeli Committee Against House Demolitions in Jerusalem, I used to go to Palestinian neighbourhoods all the time, and I witnessed many elements of the occupation. One of the most painful policies of the State of Israel against the Palestinian people is the policy of house demolitions.

And then I had to go back to my apartment in West Jerusalem where everything carried on as usual. People had no idea what was happening ten minutes away from their homes. They chatted away in the European style coffee shops with cute little tables on the sidewalk, completely oblivious.

But it was even worse when I had to celebrate Jewish holidays. Especially Passover. At Passover, we are supposed to celebrate our freedom, our liberation from slavery in Egypt. But how can we celebrate our own freedom when we are imprisoning an entire people?

How then can we celebrate Passover in 2022?

One option is to join IJV’s national campaign, Together Against Apartheid. This campaign was inspired by the outpouring of support for Palestinian liberation in recent years, as well as by the growing consensus that Israel’s abuses against Palestinians amount to apartheid. Together Against Apartheid aims to educate Canadians on the crime of apartheid as it relates to the state of Israel, and to empower you to take action.

In particular, I hope you will join me and over 2700 other people (including members of federal and provincial parliament, artists and human rights activists) by signing the Together Against Apartheid pledge today.

If you are celebrating Passover this year, and are looking for virtual seders to attend, I would highly recommend you check out the annual Third Seyder organized by our friends at the United Jewish People’s Order on Saturday April 23rd at 7pm ET. And as usual, Jewish Voice for Peace in the USA has a wide array of online Passover activities that you can participate in here.

This year, if and when you celebrate Passover, make sure you encourage people to learn more about the crime of apartheid as it relates to the state of Israel so that we can work Together Against Apartheid in solidarity with the Palestinian people and in support of universal human rights for all.