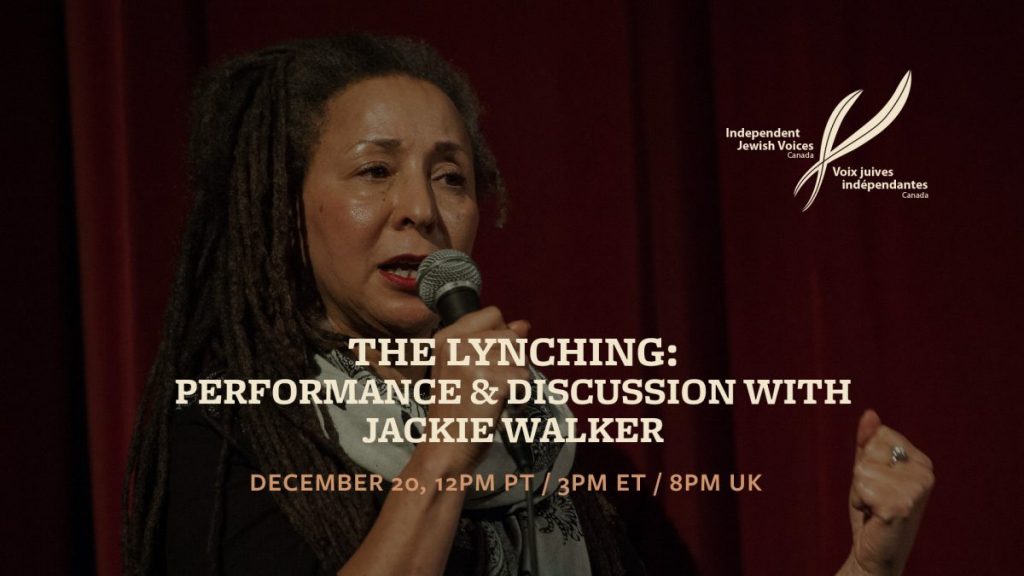 The Lynching is a one-woman performance, written collaboratively by Jackie Walker and Norman Thomas, Chair of Thanet Constituency Labour Party. The production focuses on the lives of Walker’s activist parents, her own struggles with racism after she came to Britain in the late 1950s, and what happened to her after the Labour Party was enveloped in an antisemitism conflict.

Jackie will be joining us to perform excerpts from The Lynching, and to discuss various themes related to her play, including anti-Black racism, Palestine solidarity, and the weaponization of antisemitism.

We encourage attendees to watch the film “The Witch Hunt” (available free online) prior to the event.

Jackie Walker is a British political activist and writer. She has been a teacher and anti-racism trainer. She is the author of a family memoir, Pilgrim State, and the co-writer and performer of a one-woman show, The Lynching. She held the roles of Vice-Chair of South Thanet Constituency Labour Party and Vice-Chair of Momentum before being suspended and ultimately expelled from the party during its witch hunt of Palestine solidarity activists.

Darrah Teitel is a socialist and a playwright living in Toronto Ontario. Her most recent credits include The Omnibus Bill (Counterpoint Players, May 2019) Behaviour (GCTC, 2019) Corpus (Teesri Duniya 2014, Counterpoint 2014) The Apology (Alberta Theatre Projects 2013, Next Stage Festival 2011) Marla’s Party (SummerWorks 2008) the CBC radio drama Palliative (2007) She Said Destroy (National Theatre School of Canada, 2007). Darrah also works for Action Canada for Sexual Health and Rights and is a founding member of the Courage Coalition and a proud member of Independent Jewish Voices.