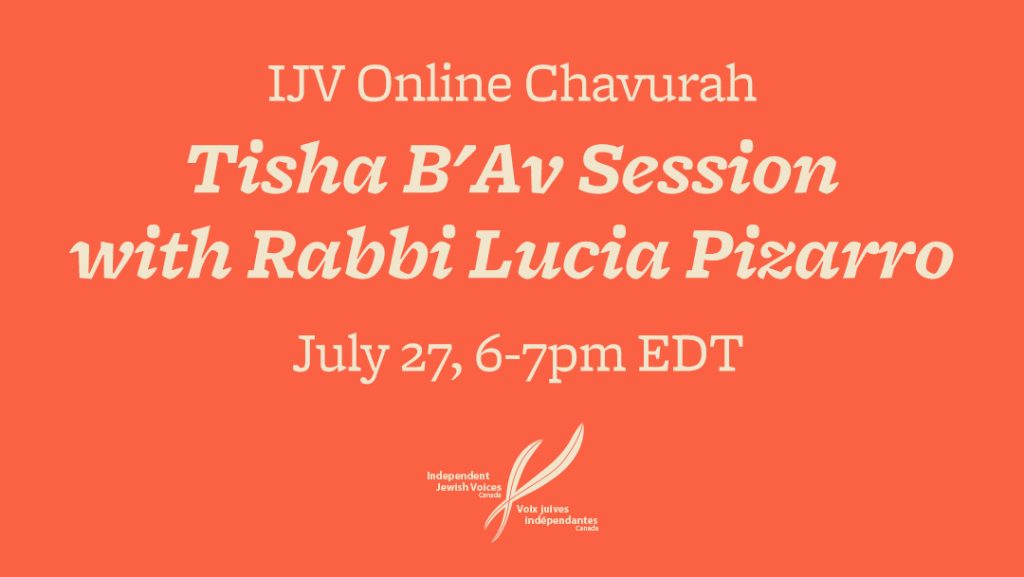 Join us for the next session of IJV’s online chavurah on Monday, July 27th from 6-7pm!

To register, email pizarro.lucia [at] gmail.com to register (with “Tisha B’Av Session” in the subject line).

**Participation is open to IJV members and non-members alike. If you aren’t yet a member, we highly encourage you to become a member or make a donation to help cover our expenses

Tisha B’Av, the 9th day of the month of Av, will begin this year on the evening of Wednesday, July 29. Tisha B’Av is the saddest day on the Jewish calendar, on which traditionally we fast for 24 hours, remembering the destruction of the Temple in Jerusalem and all the tragedies that have befallen the Jewish people. The Book of Lamentations, which mourns the destruction of Jerusalem, is traditionally read in public on the eve of Tisha B’Av. The Book of Lamentations (Hebrew: אֵיכָה, “how”) is a collection of poetic laments for the destruction of Jerusalem in 586 BCE. The book is partly a traditional “city lament” mourning the desertion of the city by God, its destruction, and the ultimate return of the divinity, and partly a funeral dirge in which the bereaved bewails and addresses the dead. The tone is bleak: God does not speak, the degree of suffering is presented as overwhelming, and expectations of future redemption are minimal.

During IJV’s Online Tisha B’Av session, we will read several verses from Chapters 2 and 3 of the Book of Lamentations. Each participant in the group will read aloud one verse and share initial reactions with the group. We will allow for responses from the other group participants and then move on to the next verse.

Please let Rabbi Lucia know in advance which verse you would like to read and reflect on.

IJV’s Online Chavurah is a non-Zionist space where we can build connections with like-minded people. All viewpoints are valuable, and we encourage participants to share their own unique thoughts and experiences. This is not a group meant to debate differences in opinion but to share and support each other’s learning.

IJV’s Online Chavurah does not presuppose any theology nor any particular knowledge about anything other than one’s own life. It uses a group format to explore Jewish text, liturgy and theology, providing time for participants to discover new meaning in old writings.