Report: Unveiling the Chilly Climate – The Suppression of Speech on Palestine in Canada 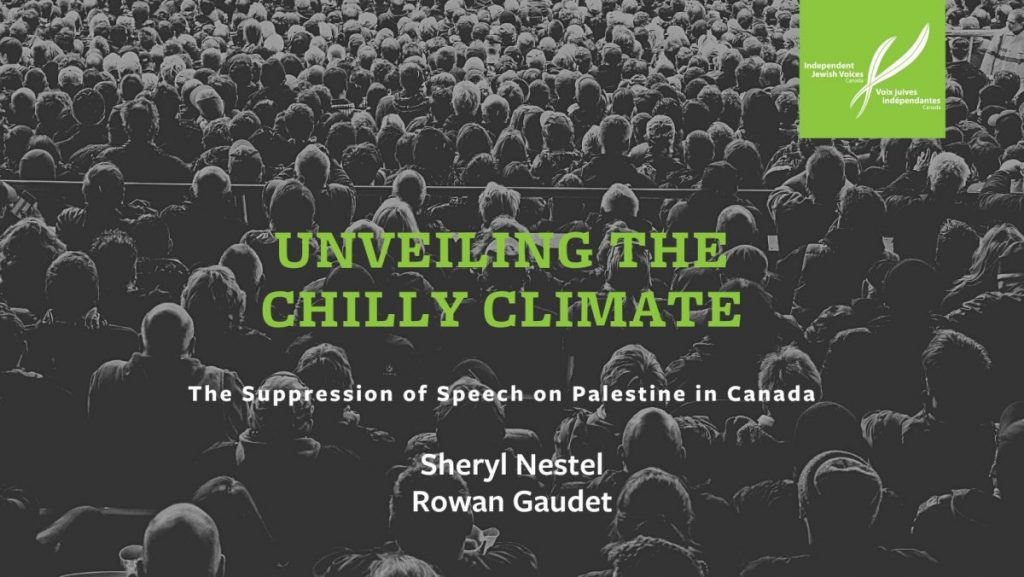 Embracing a reflexive, radical approach to ethnography, Unveiling the Chilly Climate is an archive and a roadmap. The archive is a collection of experiences of faculty, students, activists, and organizers as they confront and survive reprisals, harassment, intimidation, and racialization for their labor for and on Palestinian freedom. The roadmap is methodological; it demands that we take seriously not only the public figures and their more familiar stories, but also those precarious students, activists, and organizers as they stand up for the history and the present of Palestine and the Palestinians. Chilling effects, IJV reminds us, do not only result in self-censorship, they produce socially conforming behaviour and discourse. With this archive and
roadmap IJV and the people it documents chart the path forward to standing strong on the right side of history in Palestine, and beyond.

IJV’s timely, deeply-researched report offers critical insight into the corrosive effect of ongoing efforts to delegitimize and quash support for Palestinian rights and criticism of Israel — most notably with the targeting of individuals, academic institutions, and organizations, and the resulting chilling of free speech, legitimate debate, and protest. IJV’s deep dive into the Canadian experience offers important insights into how such efforts are being pursued around the world, and why – for the sake not only of Palestinian rights, but to defend free speech writ large – challenging and reversing these trends is critical.

Unveiling the Chilly Climate is a devastating, evidence-based, comprehensive and in-depth study of the nature and extent of the suppression of speech on Palestine in Canada. (In fact it very helpfully goes beyond Canada to summarize the situation in the USA and some European countries.) Systematically and meticulously researched, and replete with references to the ethnographic data the researchers gathered, and to conceptual and contextual work which adds to the academically sound character of the work, the Research Report constitutes a deeply disturbing indictment of the multiple sources responsible for the depth and breadth of a wholesale attack on freedom of speech. The weaponization of antisemitism so comprehensively deployed to justify racism against Palestinians is not only morally indefensible, it does nothing to protect Jews against real antisemitism.

Anthony Lerman, Senior Fellow, Bruno Kreisky Forum for International Dialogue, Vienna
Author of Whatever Happened to Antisemitism? Redefinition and the Myth of the ‘Collective Jew’

Focused on the Canadian context, this report seeks to shed light on the wave of suppression of speech regarding Palestine that is sweeping North America and parts of Europe. It documents the impact of reprisals, harassment and intimidation faced by Canadian activists, faculty, students, and organizations in relation to scholarship and activism in solidarity with the struggle for Palestinian human rights. There is a connection to be made here between these attacks and efforts by pro-Israel advocacy groups to market the International Holocaust Remembrance Alliance Working Definition of Antisemitism (IHRA), a document that has come under vigorous attack by defenders of academic freedom and Palestinian human rights. While its proponents argue that this definition will not threaten freedom of expression or inhibit criticism of Israeli policies, the findings of this report demonstrate that these basic rights are already under threat and could be further imperilled if the IHRA were to be widely adopted.

The contribution of this report is two-fold:  1) the amount and quality of information gathered here is unprecedented and speaks to the worrisome prevalence of harassment and suppression of speech on Palestine on campuses and in Canadian civil society and 2) it surpasses a simple documentation of instances of repression by employing an ethnographic methodology to analyze the so-called “chilling effect” and its impact on governmental, institutional and individual decision making. This research project situates itself firmly within the realm of critical qualitative inquiry which seeks to employ qualitative research for social justice purposes, including making such research available for public education, social policy formulation and the transformation of public discourse. Our inquiry is also shaped by decolonizing methodologies of social science research which seek to challenge institutions, academic and otherwise, which prioritize colonial forms of knowledge production and maintain institutional commitments which impede indigenous self-determination. Finally, we follow the directives proposed by queer, feminist and antiracist research methodologies which entreat us to consider how our positions in social hierarchies of race, class, sexuality, and citizenship mediate our experiences.

In all, the researchers collected 77 testimonies from 40 faculty members, 23 students, 7 activists and 7 representatives of organizations.  Testimonies were collected from participants in Ontario, Manitoba, British Columbia, Saskatchewan, Nova Scotia, Quebec and Alberta. Among the academics responding were representatives of eleven disciplines from 21 Canadian universities.

Interviewees recounted that their experiences included: political intervention into hiring; attempts to prevent access to event venues and the attempted cancellation of public events on Palestine as well as targeting and doxing, including the inclusion of 128 Canadian academics and activists on the website of Canary Mission, an organization which purports to document “individuals and organizations that promote hatred of the US, Israel and Jews on North American college campuses.” Threats of violence and genuine acts of violence were experienced by student activists and these often contained racial and sexual slurs including threats of sexual violence. Students were subject to warnings and disciplinary measures by university administrators whom respondents often described as being hostile to Palestine solidarity activism on campus.  Faculty respondents reported restrictions on academic freedom, self-censoring of expression on Palestinian human rights, discriminatory treatment by academic publishing platforms, harassment by pro-Israel advocacy groups and media outlets, attacks from colleagues, political interference by university administration, classroom surveillance by pro-Israel student groups, and anti-Palestinian and anti-Arab racism.  Indeed, the suppression of speech on Palestine has significant consequences in academia where it threatens principles of academic freedom and encourages surveillance of critical intellectuals and activists and of the oppositional knowledge that they produce.

As our research reveals, the precarious employment conditions of over half of Canada’s university teachers mean that because of the “chilly climate” around speech on Palestine untenured or pre-tenure faculty are reluctant to pursue academic or activist work in this area for fear of endangering contract renewals or future career prospects including access to publishing platforms so central to the academic tenure and promotion process.

Unsubstantiated allegations of antisemitic intent and support for terrorism are commonly levelled against pro-Palestine academics and activists. Significantly, Palestinians, Muslims and non-Arab racialized participants appear to have borne the brunt of direct attacks on their scholarship and activism. The emotional impact of harassment and suppression was felt most acutely by Palestinian students and faculty interviewed. Jewish activists were not immune to attack and were often characterized by opponents as “kapos” or “self-hating Jews.”

We also document how both on- and off-campus Israel-advocacy organizations have been at the forefront of efforts to suppress speech and activism on Palestine. As University of Pennsylvania political scientist Ian Lustick has argued, the pro-Israel organizations have constituted a ‘vigilante’ force which has made it “increasingly difficult to criticize Israel without fear of lawsuits, accusations of anti-Semitism, demands for political balance in staging of events, blacklisting of participants, or other forms of personal or institutional harassment.”[1]

Despite the proliferation in recent years of attacks on Palestine solidarity activism, public recognition of the grievous violations of Palestinian human rights has grown. This report signals that an atmosphere of repression and recrimination related to discourse and activism around Israel/Palestine is ubiquitous and insidious and should be unacceptable in a democratic society.