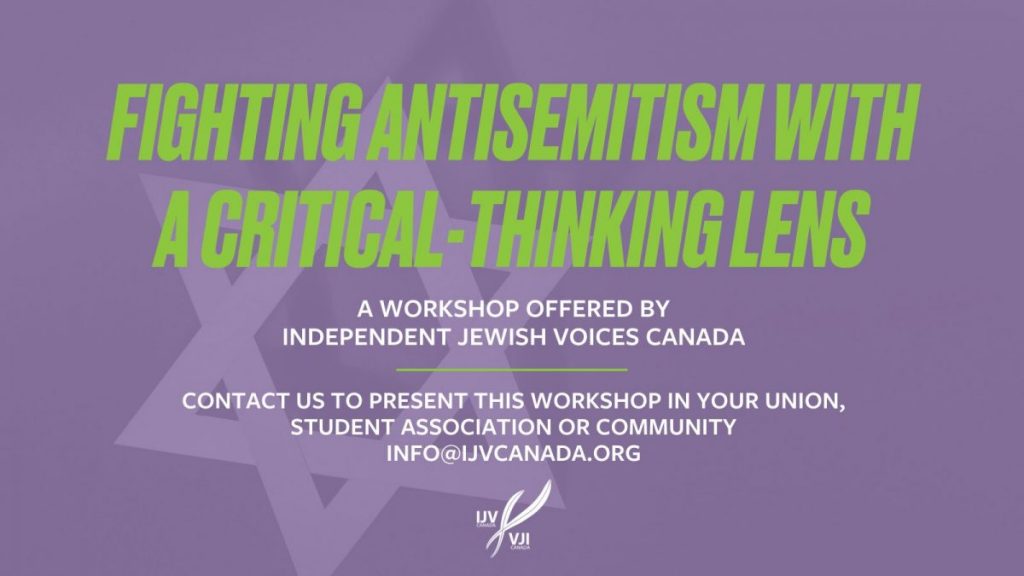 Independent Jewish Voices is currently offering this powerful, engaging workshop on antisemitism. If you would like to have us present this workshop for your union, student association, faith group or community organization, get in touch with us! We’d be happy to work with you. Contact info@ijvcanada.org.

As white supremacy and bigotry continue to rise around the world, discrimination and attacks against Jews surely follow. How do we combat antisemitism in this context?

Independent Jewish Voices is a social justice organization of Jews across Canada. We fight for peace and justice in Israel-Palestine, and organize against all forms of antisemitism, Islamophobia, racism and oppression.

Our workshop begins with an exciting interactive exercise and goes on to explore themes like:

Sheryl Nestel, PhD, has been active in Jewish life for many decades and was a leader of the Jewish student movement in the U.S. She was the principal organizer for the North American Jewish Students Network of the first Jewish Feminist Conference. She lived in Israel between 1974 – 1988. She received her PhD in Sociology and Equity Studies from the University of Toronto in 2000 and taught there until 2012. Her area of specialization was anti-racism studies, and she taught a wide range of courses dealing with the
intersections or race, gender, sexuality and ability. In 2000 she developed a course entitled “Jews, Identity and Difference,” one of the first university courses to feature the emerging literature in critical Jewish studies. Sheryl is the author of “Obstructed Labour: Race and Gender in the Re-emergence of Midwifery” (University of British Columbia Press, 2007) which won the 2007 Canadian Women’s Studies Association Annual Book Prize. She regularly teaches community courses on Israel/Palestine. She has been a member of the National Steering Committee of Independent Jewish Voices Canada since 2012. She recently published the report “The Use and Misuse of Antisemitism Statistics in Canada.”

Larry Haiven, PhD, is Professor Emeritus in the Management Department of Saint Mary’s University. He was director of the Co-operative Management Education programs there. He taught industrial relations and human resource management both at SMU and the University of Saskatchewan and has published actively in these areas. He is an acknowledged expert in the field of industrial conflict, especially in the public sector, and particularly in health care. In retirement, Larry has been active in various citizens’ organizations such as Independent Jewish Voices Canada, Nova Scotia Parents for Public Education and Equity Watch. The son of an Auschwitz survivor, Larry is a founding member of Independent Jewish Voices and a member of its steering committee and executive committee. He now publishes actively in the areas of antisemitism and peace/justice in Israel/Palestine, including a monograph “Antisemitism in context: Its use and abuse”; and articles such as “‘Cancel culture’ and the pro-Israel lobby” and “How the IHRA definition of antisemitism is used to muzzle criticism of Israel — the Winnipeg example,” and “Two very different Jewish responses to bigotry: One promoting solidarity, the other promoting insularity.”