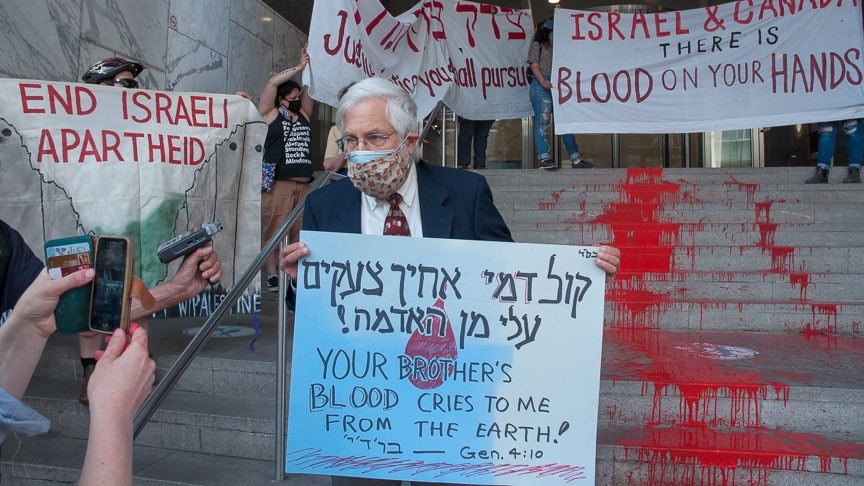 Independent Jewish Voices Canada salutes Rabbi David Mivasair, one of our members, and a group of demonstrators who poured red children’s tempera paint (which washed away in half an hour) onto the steps of Toronto’s Israeli consulate in Toronto last Friday, May 21st.

Mivasair said the paint symbolized the rivers of blood in Gaza and the West Bank from Israeli attacks.

Galit Baram, Israel’s Consul General in Toronto, complained to police who arrested Mivasair at his Hamilton home the next day.

“Red paint streaming from the Israeli consulate onto the street in Toronto represents the blood of massacred innocent Palestinian civilians. That blood cannot be washed away,” said Mivasair at the time of the action outside the consulate.

The action of the prosecutors and the Toronto police ironically reveals the distorted priorities of Canada’s public officials toward Israel.

It is against Canada’s Foreign Enlistment Act for foreign countries to recruit Canadians into their militaries. When a formal complaint was launched in October, federal Justice Minister David Lametti said he would refer it to the RCMP. Not a word since.

Mivasair linked the two events: “Canadian authorities need to uphold our federal law to stop illegal Israeli military recruitment in Canada. Despite the clear evidence we provided more than half a year ago concerning this, there’s no response. Yet, when the Israeli consul complains about washable children’s red paint, immediately two officers are found on a long weekend to make a three-hour round trip to arrest someone she alleges is associated with the crime.”

A parliamentary petition is being circulated demanding Lametti undertake a thorough investigation and lay charges against those recruiting for the Israel Defence Forces. NDP MP Matthew Green sponsored the petition and 7000 Canadians have already signed it. IJV urges Canadians to add their names to the petition here.