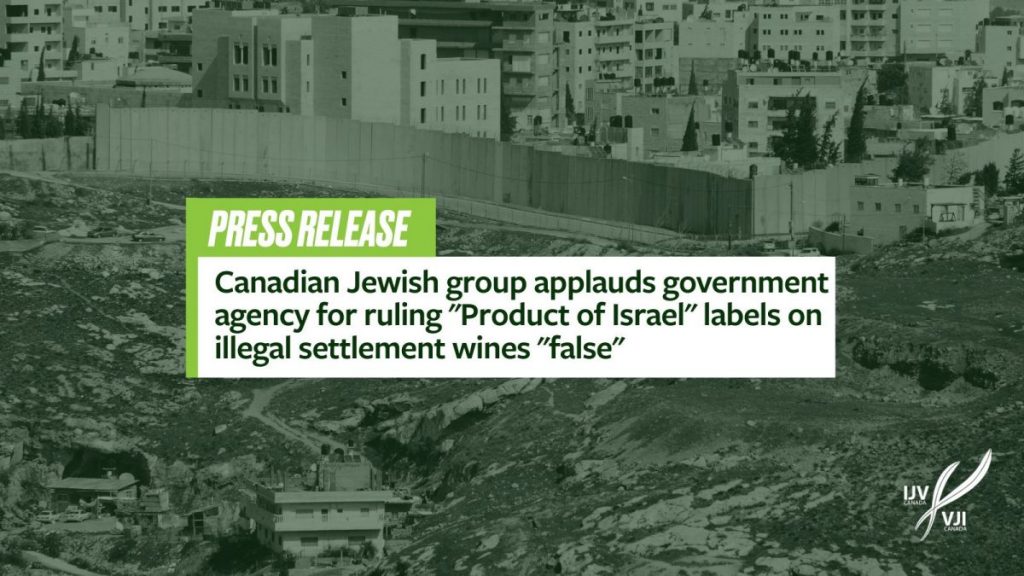 May 16, 2022 – Independent Jewish Voices Canada (IJV) welcomes a ruling released by the Canadian Food Inspection Agency (CFIA) Friday which declares that it is false to label wines produced in illegal Israeli settlements as “Product of Israel.” This ruling is consistent with the CFIA’s initial decision on the matter, which the CFIA overturned a day later in response to political pressure by Canadian politicians, bureaucrats and Israeli officials.

This is the latest in a five-year long legal battle led by IJV member Dr. David Kattenburg, which has made its way to the Federal Court of Canada and the Federal Court of Appeal before being sent back to the CFIA. IJV acted as an official intervenor in the Federal Court case, Kattenburg v. Canada (Attorney General), arguing that accurate labelling is important to the full exercise of freedom of expression as entrenched in the Charter. In their ruling, the judge agreed this includes being provided the necessary knowledge to express political views through purchasing decisions. IJV National Coordinator Corey Balsam was the affiant in the case, represented by prominent lawyer and recent Order of Canada appointee Barbara Jackman.

“At a time when thousands of Canadians as well as the federal NDP are calling for settlement goods to be banned outright–the absolute least that can be done is for the CFIA to make sure that these products are accurately labelled,” said Balsam. “Canadians deserve to know if the wine they are buying was made in settlements which contravene international law.”

“We are heartened to see that the CFIA has reverted to its initial ruling, allowing Canadians the ability to make informed ethical choices when considering their purchases,” continued Balsam. “And we urge them to stand their ground this time around, despite the predictable political pressure.”

Although IJV welcomes the ruling, it expresses concern over the language used by the CFIA, which describes the wines as being “produced in an area of the West Bank administered by the State of Israel.” This language does not suffice to convey that the wines in question are produced in Psagot and Ma’aleh Levona, two Israeli-only settlements in occupied Palestinian territory, the existence of which are considered a war crime under international and Canadian law.

This latest ruling comes after Human Rights Watch and Amnesty International have released reports detailing that Israel is practicing the crime of apartheid as defined in international law. “Settlements such as Psagot are a crucial aspect of Israel’s system of apartheid,” said Balsam. “Rather than helping them flourish at the expense of Palestinian human rights, we should be joining together against apartheid.”