Dispatch #4 From Palestine on COVID-19, Curfews and Mutual Aid 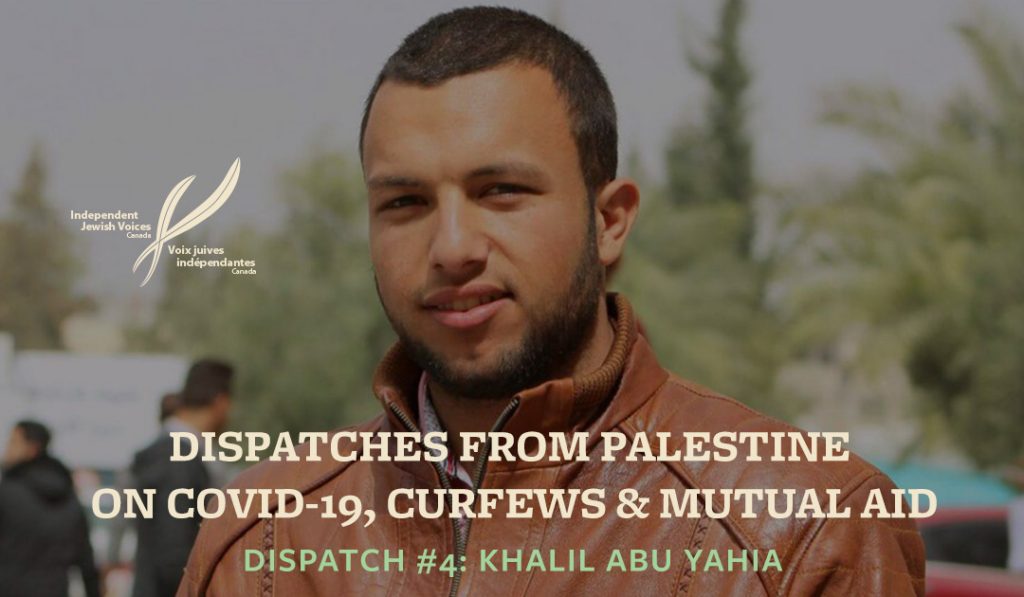 Now more than ever, Palestine must be free. The brutal siege of Gaza, and the ongoing occupation of the West Bank, are tinderboxes for the Coronavirus. To date, the Gaza Strip has confirmed nine cases of the virus. Medical aid must get in, people must have access to testing, and Israel must end its daily restrictions on Palestinian life.

Khalil is soft-spoken and thoughtful as we speak over a Skype video call from his home. A wide smile doesn’t leave his face during the interview, even though he goes to dark places at times. He begins by offering his reflections on the arrival of the deadly Coronavirus in the Gaza Strip.

“For me, it’s like a deja-vu. We’ve been through things like this many times. Some people are saying, ‘we’ve faced the fourth strongest army in the world, so we’re not afraid of being prevented from going out in the streets’.

The responsibility for the situation lies with Israel and its army. Gaza is still under occupation, therefore under international law, Israel should be held accountable. Israel is responsible for our health — they need to be getting us our medicines and treatment, but they don’t.”

There are mounting fears that a COVID-19 outbreak, combined with the Israeli siege, could be a recipe for genocide in Gaza. To date, Israel has only allowed a few hundred Coronavirus test kits into the besieged territory with a population of nearly two million.

“The sad thing that we are thinking here in Gaza is that Israel is going to get away with this: they will not be held accountable for our health. Because if you ask yourself why we’re suffering, and why we’re not getting proper treatment for the virus, it’s because we weren’t born to Jewish mothers. Think about it. If I, Khalil, had been born to a Jewish mother, my health might be better and I would have access to treatments. And that biological racism that Israel is basing its policies on is killing us.

If you don’t put the maximum pressure on Israel to lift the siege right now, Gaza will become a graveyard.

In addition, there’s a conspiracy of silence that is killing us. The international community is watching what is happening in Gaza, and never does anything concrete to stop it.

People have compared Gaza to a zoo. There have been reports that have said that Gaza would be unliveable in 2020, and this was without the Coronavirus. Well, now we are in 2020, and we just discovered the first nine cases of the virus in Gaza. God knows how many more cases there are. The situation is getting worse in Gaza. What we want to say to the world is ‘enough is enough’. If you don’t put the maximum pressure on Israel to lift the siege right now, Gaza will become a graveyard.”

I asked Khalil to describe the atmosphere in the streets of Gaza City today.

“Most people are saying, ‘isn’t it enough that we are under occupation, and have been under siege for the last 14 years?’ Isn’t that enough without the Coronavirus? Now we are expecting the world to say something.”

A State of Emergency Since 1948

“You know, in countries like Britain and America, they’ve been declaring states of emergency. We here in Gaza have been in a state of emergency since 1948. But no one has listened to us. So we’re asking, aren’t we human like you? Don’t we have feelings like you and problems that need to be solved? Why so much racism against us? This is what people are saying in Gaza.

I asked Khalil about quarantines or other protective measures in place right now in Gaza.

“The police are saying you can’t have more than five people together at once, or have parties. You can’t do anything that brings people together. They have also closed the public markets. And of course no one can travel in or out of Gaza, but that hasn’t changed much since the beginning of the Coronavirus.”

“All Wars Are Etched in Our Minds”

People around the world right now are facing all sorts of travel restrictions, and I tell him that people are trying to learn from Palestinian experiences of life under siege. So I ask him how people in Gaza have managed to survive and cope.

“People here, like anyone else in the world, have feelings. I think that 100% of the population of Gaza is traumatized. They want to show they are coping with life, because they know life has to go on. Their hope is that the next generation will be able to make change. To be honest, though, you asked about how we have survived, but we haven’t survived. All wars are etched in our minds. We see it in our dreams.

I agree with Khalil that the world hasn’t heard Gaza’s voice, but I ask him that if the world could hear his voice right now, what would he want to let people know as they face the Coronavirus pandemic.

“What you are experiencing right now, Gaza has been experiencing for decades. What you fear is not the worst for us. You, the world, may have not heard us, but we hear you, and we are responding to you.

What we want from the world is to show us solidarity. And to show that they care about us, we want one thing from you: we want you to boycott Israel. That is the one thing that will hold Israel accountable for its crimes against international law, and to get us justice — more BDS (Boycott, Divestment, and Sanctions) actions. This is the only way to deal with apartheid. It worked in South Africa, and it will work for Israel.

We have lives we need to live. We don’t want to die because of the Coronavirus. We are human like you, and we’re not asking for too much. We’re asking you to be human too.”