Dispatch #5 From Palestine on COVID-19, Curfews and Mutual Aid 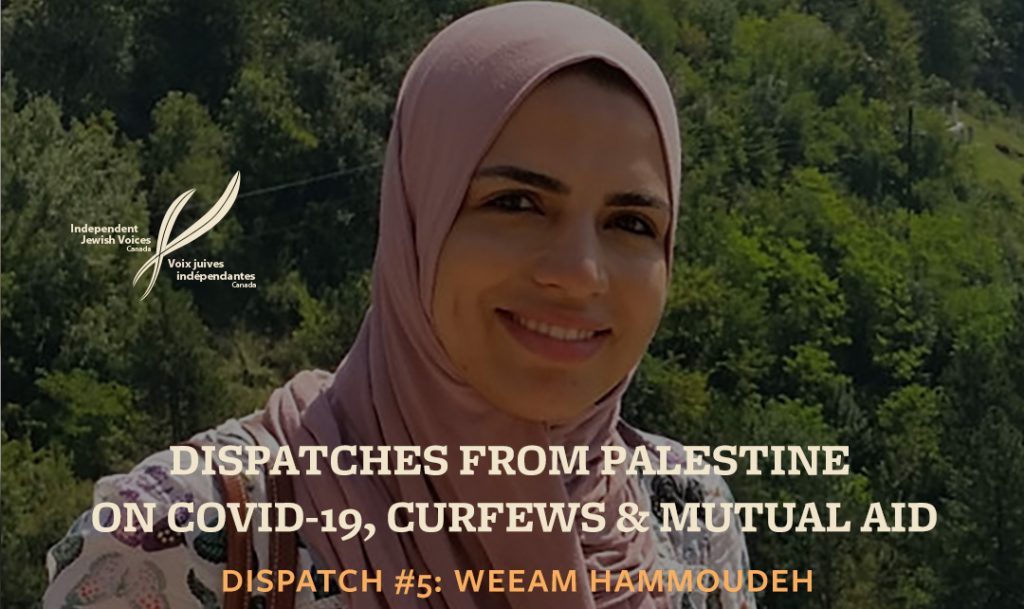 Now more than ever, Palestine must be free. The brutal siege of Gaza, and the ongoing occupation of the West Bank, are tinderboxes for the Coronavirus. To date, the Gaza Strip has confirmed ten cases of the virus. Medical aid must get in, people must have access to testing, and Israel must end its daily restrictions on Palestinian life.

Today’s dispatch comes from Weeam Hammoudeh. Weeam is a professor and researcher at the Institute of Community and Public Health of Birzeit University, just outside of Ramallah. She coordinates the mental health unit within the institute, and much of her work relates to well-being and quality of life issues within populations. Her research interests are focused on how broader structural and political factors affect health and well-being.

Even before the COVID-19 pandemic began, Weeam was part of a research team looking at the concept of uncertainty in the Palestinian context, and how uncertainty impacts people’s lives and mental health. “We had just started doing the analysis, and then the whole COVID-19 situation broke out, so we might need to go back and do more data collection,” she says with a bit of a nervous laugh.

Uncertainty is certainly a phenomenon being experienced by many around the world right now, from borders being closed, to schools being shut down, to thousands upon thousands of people losing their jobs. I ask Weeam what the atmosphere is like around her in Ramallah and the broader West Bank.

“I think there is a lot of uncertainty, and people are starting to get more worried. Yesterday, there was a woman who died of COVID-19. She was diagnosed the same day, and died later that evening. This heightened a lot of the worries and fears.

In the beginning, people didn’t fully understand the magnitude of the problem. But ever since the first cases were confirmed in Bethlehem on March 5th, you could sense people were starting to get more worried. But that was also when the Palestinian Authority (P.A.) began to take stricter measures to try to contain the spread. They wanted to contain the problem before it got out of hand, because we don’t actually have the infrastructure to deal with a wide scale spread.

The P.A. took strict preventative measures early on, which I think was responsible. It’s also a recognition of how things could get if the virus were to be left alone, such as has been suggested by other global leaders.” We can think of leaders like Donald Trump or Jair Bolsonaro, who balked at concerns around COVID-19 earlier on in the outbreak.

Some might say that with regards to health conditions, Palestine is in a better situation than other countries in the Middle East. But as the occupying power, under international law, Israel has the responsibility for the health and well-being of the occupied population. So the point of comparison shouldn’t be other countries in the region, but rather with the Israeli health system, which is actually allowed to thrive.

Bringing up the difficulties in Gaza with the blockade, I ask her what the situation is in the West Bank with hurdles due to the Israeli occupation.

“If you look at the development of the healthcare system broadly speaking, it has faced a lot of obstacles related to the political context. We don’t have control over our borders, so Israel dictates what’s allowed in and what isn’t. There are certain services, and certain medical equipment, that are prohibited. Israel designates certain items as ‘dual use’. So if there is anything that could potentially be used to breach security, then it isn’t allowed. For example, if we’re talking about oncology services within the West Bank or Gaza, Palestinians are only allowed to have equipment for chemotherapy. Anything related to radiotherapy or radiation isn’t allowed, because the equipment is prohibited. Therefore patients need to be transported to East Jerusalem, Jordan, Israeli hospitals, or Egypt. This is one example of constraints on the healthcare system, aside from the broader challenges to health. And because of these constraints and structural issues, we have a fragmented, aid-dependent health system unable to fully realize its potential.

Some might say that with regards to health conditions, Palestine is in a better situation than other countries in the Middle East. But as the occupying power, under international law, Israel has the responsibility for the health and well-being of the occupied population. So the point of comparison shouldn’t be other countries in the region, but rather with the Israeli health system, which is actually allowed to thrive.

A situation like this lays bare a lot of the inequities that exist on a global scale. It’s highlighting who is more vulnerable. I think it’s important not simply to say who is more vulnerable, but also to recognize why these vulnerabilities exist… Here in Palestine, it’s very much intertwined with the political context of ongoing occupation, settler colonialism, and apartheid.

As Weeam speaks to me with a hint of anxiety in her voice, I ask her how she’s been coping with the changes brought on by the Coronavirus.

“They closed down the schools and universities in the West Bank as soon as the first cases were discovered in Bethlehem. For me, I had to shift all my classes online. It was difficult, but I think it was very important they did this. They also closed down places where there could be large gatherings of people, such as mosques. It’s hard to focus on work, just because there’s a lot of uncertainty and anxiety about how things can go moving forward.

Everyone is worried. I’m constantly tracking the news on the ministry’s website. It’s taking a lot of headspace. But at the same time, you do see people trying to support each other, even if it’s remotely. My colleagues and family are very supportive, and we all check in with each other. We’re seeing initiatives such as people preparing food baskets for families in need.

Here in Palestine, it’s very much intertwined with the political context of ongoing occupation, settler colonialism, and apartheid. It’s important to keep this in mind. But also, we can’t lose sight of the source of all of this. What happens in these situations is that you get caught up in the urgency of the situation, in either containing the problem, or providing quick solutions to the immediate problems. And I think this is important. It’s important to take all the measures that we can to save people’s lives, or to stop this disease from spreading.

There are more immediate needs, such as providing testing, or building up our emergency infrastructure to deal with this situation. But in the end, it would be very unfortunate if we only focused on the emergency response without asking ourselves why these vulnerabilities and structural inequities continue to exist. That’s why we need to shift the focus of the conversation to justice and freedom. There are a lot of lessons that need to be learned on a global scale, and the solution needs to exist beyond national borders. Global solidarity needs to push agendas that have the well-being of populations as a key priority, rather than discrimination and profit.”