IJV Canada statement on the events in Charlottesville and Quebec 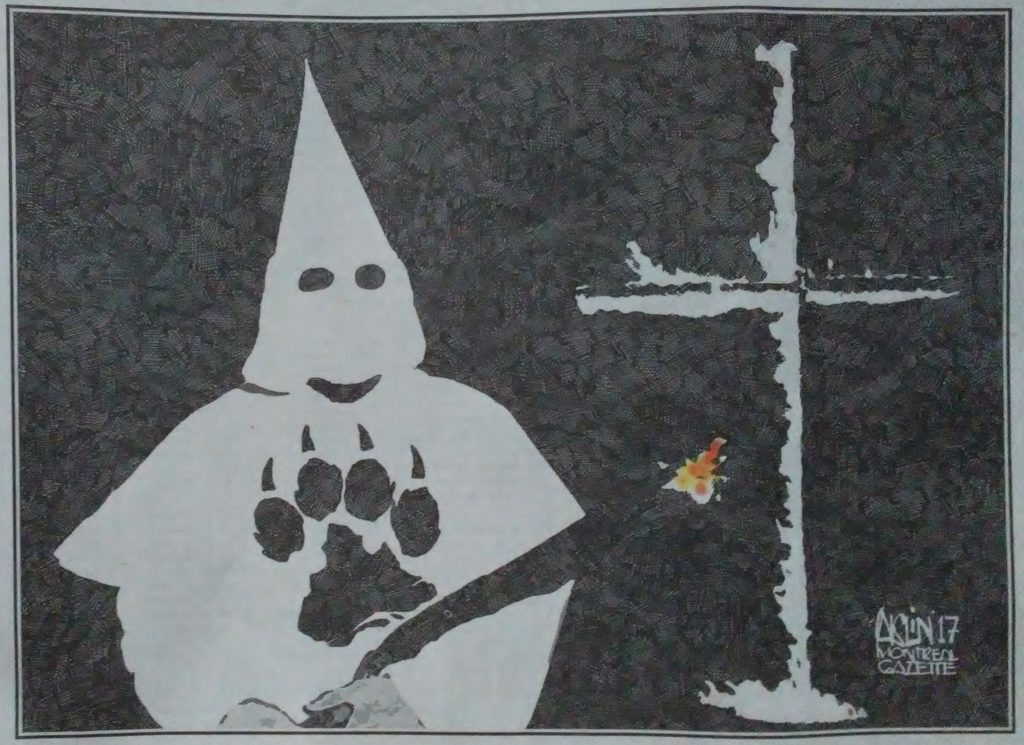 One important aspect of the Charlottesville racist events is the brazen inclusion of the Jews as targets for white supremacist wrath. Scenes of Nazis marching with firebrands chanting “The Jews Will Not Replace Us[1]” are now seared into brains around the world.

Is the inclusion of Jews among the targets of white supremacy a sign that we must now pay more attention to the right-wingers than before?

Our response is that the inclusion of Jews as targets does not in itself make the incidents more serious. They are serious enough. We must not ignore — and we must and do — denounce the antisemitic aspects of white supremacy.

But we must also not privilege anti-Jewish bigotry above any other type of bigotry and hatred.

The size and boldness and violence of the fascist activity in Charlottesville was inspired by Trump’s behaviour and pronouncements long before the event. What used to seem a marginal and subterranean movement has quickly been given licence to come to centre stage.

A white shooter killed six and injured nineteen Muslims in a Quebec City mosque in January, even as fascist recruitment posters abounded at Laval University. Quebec and Canada’s racist movement grew exponentially afterwards.  Last Sunday, the numbers were equal in Quebec City between the few hundred racists aligned with the Islamophobic and anti-refugee organization La Meute, and the anti-racists counter-protesters.

A few hundred people showed up at a “Million Canadians” pro-Trump rally on Parliament Hill in June. “Proud Boys of Canada” disrupted a Halifax rally of indigenous people and allies in July. Storm Alliance members harass refugees crossing the boarder into Canada. This year, Jewish Defence League members from Toronto traveled to the AIPAC convention in Washington and beat up a Palestinian teacher.


The Charlottesville affair and Quebec’s successful La Meute have inspired other racists. There is urgent work to be done by all progressive people to stop this surge of hatred.

In fact, the best response of Jews to the recent events must be not to draw attention away from Muslims, refugees, people of colour,  LGBTQ+ by claiming a special and incommensurable Jewish hurt. The best response for Jews is to stand together with these other targets of hatred and to fight alongside them. Despite the antisemitism of the white supremacists, Jews are enormously privileged in American and Canadian society and we should USE that privilege to unite with others to combat ALL forms of prejudice and hatred.

An issue that SHOULD trouble Jews profoundly is how the white supremacists can hate Jews but love Israel. In an interview with Israeli television, “alt-right” honcho Richard Spencer declared himself a “White Zionist,” claiming only the same rights to exclusion for whites that Israel practices for Jews.

Naomi Dann, of the US group Jewish Voice for Peace, correctly points out:

“Richard Spencer, whose racist views are rightfully abhorred by the majority of the Jewish community, is holding a mirror up to Zionism and the reflection isn’t pretty[2].”

Leaders in mainstream Jewish organisations have been muted or silent about this paradox and tepid in condemnation of the Charlottesville racism. We need to hear Jewish voices on human rights issues like police carding, the inquiry into Missing and Murdered Indigenous women, the massive rates of incarceration and poverty among Indigenous and African-Canadians, and the vilification of Muslims.

It’s time for Jewish Canadians to stand up for others.

Independent Jewish Voices Canada (IJV) is a national human rights organization whose mandate is to promote a just resolution to the conflict in Israel and Palestine through the application of international law and respect for the human rights of all parties.

[1] This is a variation on the slogan “You will not replace us,” referring to the neo-fascist fear that the “white nation” is faced with extinction by the influx of non-whites.