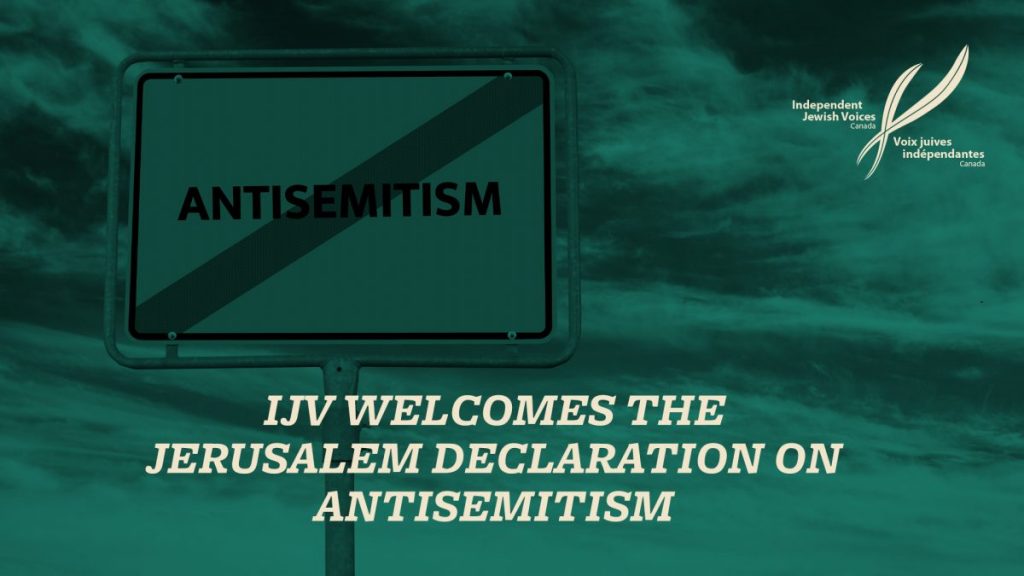 The Jerusalem Declaration on Antisemitism (JDA) is a historic document signed by 200 of the world’s leading scholars in Antisemitism Studies and related fields, including Jewish, Holocaust, Israel, Palestine and Middle East Studies. It aims “to strengthen the fight against antisemitism by clarifying what it is and how it is manifested,” and “to protect a space for an open debate about the vexed question of the future of Israel/Palestine.”

“The Jerusalem Declaration comes at a moment when Jewish communities around the world are increasingly divided on the controversial IHRA definition,” explains Corey Balsam, IJV’s national coordinator. “We hope that the JDA will serve as a useful tool for governments and institutions who are serious about combating antisemitism, rather than simply scoring points with the Israeli government and pro-Israel lobby groups.”

The IHRA definition has sparked major controversy in Canada and across the globe for conflating legitimate criticism and protest of Israeli government policies with antisemitism. Earlier this week, a statement was released by more than 150 Canadian Jewish academics opposing the IHRA definition and expressing concern regarding attempts to have it passed on their campuses. They add their names to over 600 Canadian academics, nearly 20 Canadian faculty associations and academic unions, and many major civil society organizations such as the BC Civil Liberties Association and the Canadian Labour Council who have taken similar positions.

“The JDA will be a helpful tool to identify what antisemitism is, so that we can properly fight it. It’s also useful in that it clearly identifies what antisemitism is not, including criticizing or opposing Zionism, supporting the Palestinian civil society-led Boycott, Divestment and Sanctions movement, or referring to Israel as an apartheid state. By contrast, the IHRA definition has been used to label all of these things as examples of antisemitism.”

“While IJV welcomes the JDA, it does so cautiously and with some critique. Namely, in its attempts to both replace and critique the IHRA definition, the JDA falls into the trap of situating Israel-Palestine at the centre of conversations about antisemitism,” said Balsam. “This disproportionate focus risks contributing to the intense policing of discourse on Israel-Palestine, and distracting from the real dangers we face as Jews today from white supremacists and the far-right.”

The IHRA has so far been adopted as part of the federal government’s anti-racism strategy, by several suburban municipalities in Ontario and Quebec, and by an anti-democratic Order in Council in Ontario last October. City councils in Vancouver, Calgary and Montreal have rejected it. A resolution is also on the table at the upcoming NDP convention in April, which moves to have the party oppose the IHRA definition and commit itself to fighting genuine antisemitism and other forms of racism.

“It takes much more than definitions to effectively dismantle antisemitism,” said Balsam. “But if governments and institutions feel the need to endorse a definition, the JDA is undoubtedly a far better option.”