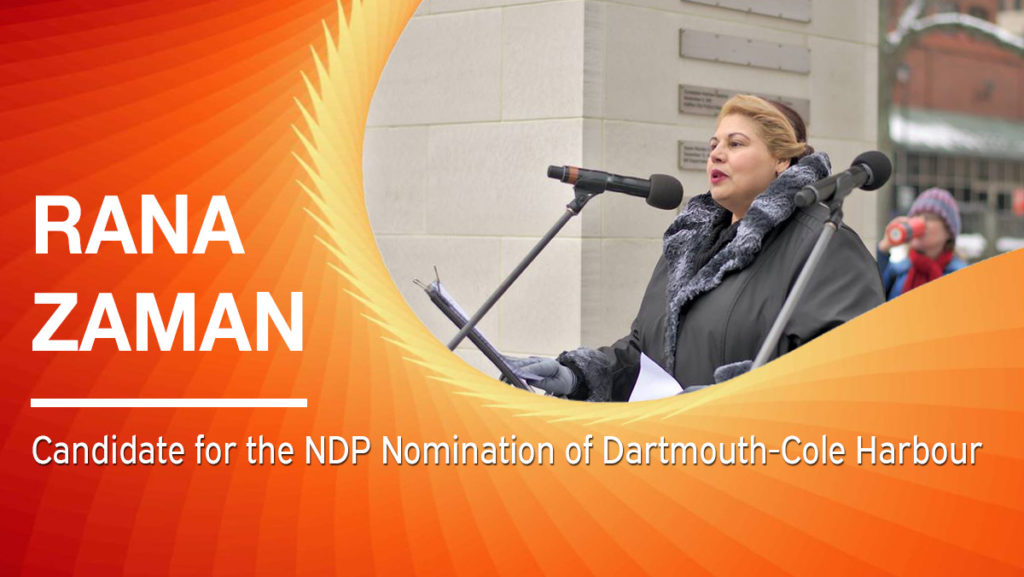 The federal New Democratic Party has removed noted Halifax activist Rana Zaman from the party’s candidacy in the Dartmouth – Cole Harbour riding, which she won on May 1 by a vote of party members. The ostensible reason for her removal is several tweets that Zaman made in August 2018 when Israeli forces were shooting thousands of unarmed Gazans during the “Great March of Return.”

Although Ms. Zaman’s tweets did contain comparisons to the Holocaust that Independent Jewish Voices does not condone, her statement of apology, sent within less than 24 hours, acknowledged the inappropriateness of those comparisons and showed her commitment to learning from her Jewish allies.

Jewish theology and religious jurisprudence distinguish between “Yetzer HaTov” (the inclination to do good) and “Yetzer HaRa” (the inclination to evil-doing, something like the western legal notion of “mens rea” or “malice aforethought”.) An act motivated by Yetzer HaRa should be treated much more severely. But an act motivated by Yetzer HaTov should be treated with mercy, understanding and education. The concept of restorative justice is appropriate.

Ultimately, the controversy around these tweets distracts from the murderous and illegal Israeli activities in Gaza. Those atrocities speak for themselves and require no embellishment by crude analogies.

According to Amnesty International, by August 2018 Israeli forces had killed almost 150 Palestinians. At least 10,000 others had been injured, including 1,800 children, 400 women, 100 paramedics, 100 journalists and Canadian emergency room physician Tarek Loubani.

Knowing Ms. Zaman as a social activist who cares deeply about and works against injustice, we are confident that neither her intentions nor her actions were antisemitic. And we will work with her, not against her.

But that is not the way the Israel lobby views these matters. They are embracing the International Holocaust Remembrance Association – Working Definition of Antisemitism (IHRA-WDA). Independent Jewish Voices Canada has a rigorous critique of that weak, vague and dangerous document. It has also been condemned by the British Columbia Civil Liberties Association.

Seven of the eleven “examples” in the IHRA-WDA involve not hatred of Jews but criticism of Israel. Its author, American legal scholar Kenneth Stern, has disavowed the document. It is clearly meant as a cudgel to beat critics of Israeli policy over the head. The IHRA document says that “drawing comparisons of contemporary Israeli policy to that of the Nazis” is nothing less than full-blown antisemitism. Full stop. The IHRA-WDA, to which representatives of the mainstream Jewish community directed Ms. Zaman in response to her tweets, becomes judge, jury and executioner. The Israel lobby is demanding that the highly-flawed IHRA definition be adopted by all Canadian governments, universities and other such institutions.

As for the NDP, now that Ms. Zaman has posted her statement, why is that apology not good enough for the party to re-instate her to the candidacy? In the 2015 federal election campaign, NDP leader Thomas Mulcair blocked four candidates found to be critics of Israeli policy. We had thought that under Jagmeet Singh the party would be more even-handed on the question of Israel/Palestine. But at its convention in March 2018, its apparatchiks conspired to keep a very mild resolution on the issue from even reaching the floor.

Shame on the NDP for betraying its progressive roots by allowing itself to be manipulated by the Israel lobby and throwing a progressive woman of colour under the bus.