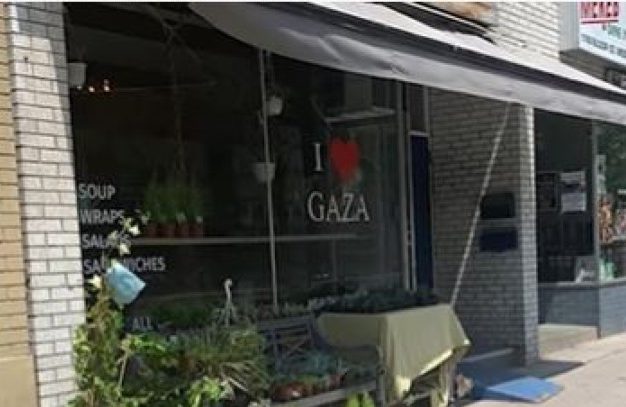 In early July, the Jewish Defense League (JDL), a group identified as a “proscribed  terrorist group” by the FBI, unleashed a campaign of intimidation against Foodbenders, a Toronto restaurant. The owner, Kimberly Hawkins, had earlier painted on her front window “I [Heart] Gaza” in response to Israel’s blockade of Gaza and its deadly response to the Palestinian Great March of Return, and had now posted “open now for non racist shoppers …#zionistsnotwelcome” on her Instagram page.

The Jewish Defense League, along with mainstream Canadian Zionist organizations, began a concerted campaign to inflict irreparable harm on the owner and her business. Subsequent to interventions by the JDL, B’nai Brith and the Friends of the Simon Wiesenthal Centre, numerous food delivery services and online apps including Uber, Door Dash, Ritual, Square and Shopify – resources essential to any restaurant that wants to survive during the pandemic – cut their ties to Foodbenders. A defamation lawsuit and an Ontario Human Rights Tribunal complaint have also been filed against the restaurant.

On July 4, a woman was caught on camera defacing the store by spray painting Stars of David on its windows. On July 5, The Jewish Defense League held a demonstration in front of the store and left a despicable calling-card: Islamophobic graffiti slandering Muslims and the religion of Islam in the most vile terms possible.

The woman who illegally defaced the restaurant windows has not been charged. And while the Centre for Israel and Jewish Affairs, B’nai Brith Canada and others have been quick to attack Foodbenders, they have been silent on the vandalism and the despicable Islamophobic graffiti written by the Jewish Defense League. These attacks have to be seen in the context of a larger effort by both mainstream and right-wing Zionist groups to silence support for Palestinian human rights and harsh critiques of Israel and Zionism. Indeed, they are now using this incident as an excuse to try to get Ontario politicians to fast track the passage of the highly controversial Bill 168 which seeks to enshrine in law the International Holocaust Remembrance Alliance Working Definition of Antisemitism. The definition equates antizionism with antisemitism and its passage will most certainly lead to the suppression of political speech and academic freedom.

However, what should be an open and shut case of suppression of pro-Palestine speech has been complicated by evidence that the owner published antisemitic comments on her Instagram page. Among the posts, were claims that the Jewish Defense League controls “our media and elected officials” and another that features a photo of infamous sex offender Jeffrey Epstein and his assistant Ghislaine Maxwell that included the comment “Just wait until I tell you about these two and their connections with zionist Mossad.” While these and similar posts targeted “Zionists” and not “Jews,” they repeated classic, common and ultimately fallacious stereotypes of Jews as unrestrained evil power-mongers. Ultimately, it is the broad, exaggerated and conspiracy-tinged allegations, which reinforce classic antisemitic allegations against Jews that disturb us. Why make such inflammatory claims, many with long histories rooted in antisemitism, when showing specific examples of Israeli crimes and the complicity of Zionist organizations in their commission are more than adequate to prove the righteousness of your cause?

Independent Jewish Voices Toronto chose to reach out to Kimberly Hawkins to express our concern over her social media posts and to try to help her understand why her posts were antisemitic. We emphasized that expressions of antisemitism and any other forms of racism are unacceptable in the Palestine solidarity movement and, indeed, weaken our struggle.   IJV Toronto found that Ms. Hawkins was open to hearing this criticism, expressed regret, and made it clear that she did not want to offend or encourage antisemitism.

We commend Ms. Hawkins for her willingness to hear uncomfortable truths and her agreement to rethink her use of these tropes. Members of Independent Jewish Voices Toronto believe that it is critical to oppose antisemitism, Islamophobia, anti-Black, anti-Indigenous, and all forms of racism and bigotry. When someone is willing to come forward and learn, we do not turn our backs on them or attempt to destroy them as the JDL, CIJA, B’nai Brith and others have done.

The attacks on Foodbenders are part of a concerted effort by Israel advocates and the Israeli government to equate antizionism and antisemitism and to contain, control, and ultimately suppress critique of the settler colonial nature of Israel. These organizations often claim that they speak for all Jews but we know that this claim is wrong.  Indeed, a significant number of Canadian Jews are highly critical of these organizations and of their willful ignorance and/or their support of Israel’s oppression and suppression of Palestinians as well as the weaponization of charges of antisemitism against supporters of justice for the Palestinian people.

It is essential to apply a reality check to the Foodbenders affair in the context of power. A small sandwich shop and its supporters are very, very weak compared to the combined might of the State of Israel, its international allies (like Donald Trump and numerous Canadian politicians and bureaucrats) and its uncritical and vengeful supporters in the Canadian Israel lobby.

In a clear case of overkill, they have trained their weapons not on the antisemitic white supremacist right but on Kimberly Hawkins and her little restaurant. They have focused not on her handful of truly antisemitic posts, but on her antizionism. The silence of CIJA, B’nai Brith and others regarding JDL’s overt racism and its thuggery against Foodbenders, including death threats against Ms. Hawkins and her family, demonstrates that their claims to support human rights are empty and deceptive.

Independent Jewish Voices Toronto adamantly asserts that antizionism – the principled opposition to an ethnocentric, apartheid state – does not constitute antisemitism and we will carry on supporting those who criticize the violent and racist Israeli regime.

However, we must reiterate here that there is no room in our movement for antisemitism and we will continue to alert our allies when they step over that line. But if we have zero tolerance for antisemitism, we must have zero tolerance for other and related forms of bigotry as well. It is our hope that those of us in the struggle for freedom and justice in Palestine/Israel listen to and respect one another and endeavour to fight the best fight we can because that is the way we will win.