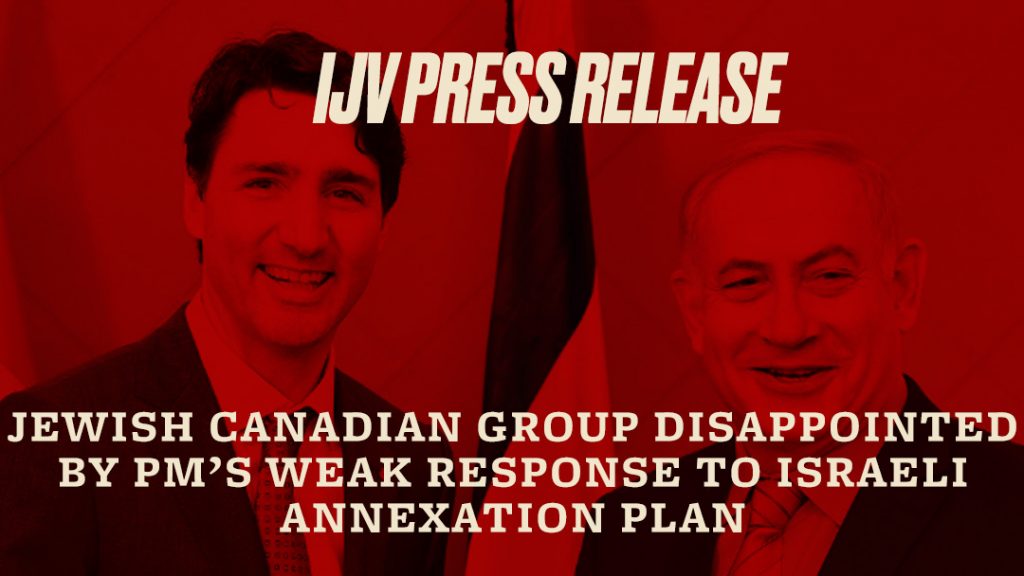 A series of statements on behalf of Trudeau released yesterday cite a phone call he had with Israeli Prime Minister Benjamin Netanyahu, congratulating him on forming a new government, his fourth since 2009. Trudeau also reportedly hinted at opposition to Israel’s annexation plans, stating: “In these times of uncertainty, our commitment to international law and the rules-based international order is more important than ever.” The two apparently also spoke of ways to strengthen relations between the two countries.

“Given Trudeau’s frankly embarrassing record on the Israel-Palestine file, we are relieved to some extent that he even went as far as hinting at concerns over the annexation plan. That said, the mildness of his reported opposition says a lot about his willingness to challenge Israel for its flagrant disregard of international law,” said Corey Balsam, IJV’s national spokesperson.

By contrast, Canada’s European allies have not shied away from publicly and straightforwardly opposing annexation, and several–including France, Belgium, Ireland, Spain–have openly proposed punitive action to deter Israel from going ahead with the plan. In the United Kingdom, over 130 parliamentarians from across the political spectrum signed an open letter to PM Boris Johnson calling for sanctions. Two of Canada’s opposition parties, the Green Party of Canada and the New Democratic Party, have also weighed in expressing firm condemnation.

“With its annexation plan, Netanyahu is attempting to see how far it can push its impunity on the world stage,” says Balsam. “This is a test to countries like Canada which claim to stand for a rules-based international order, but in reality only do so selectively, whenever it is politically expedient.”

“As far as IJV and most Canadians are concerned, it has long been reasonable for Canada to impose sanctions on Israel for its gross violations of international law and Palestinian human rights,” says Balsam.” As the Jewish sage, Rabbi Hillel, once said, “if not now, when?”