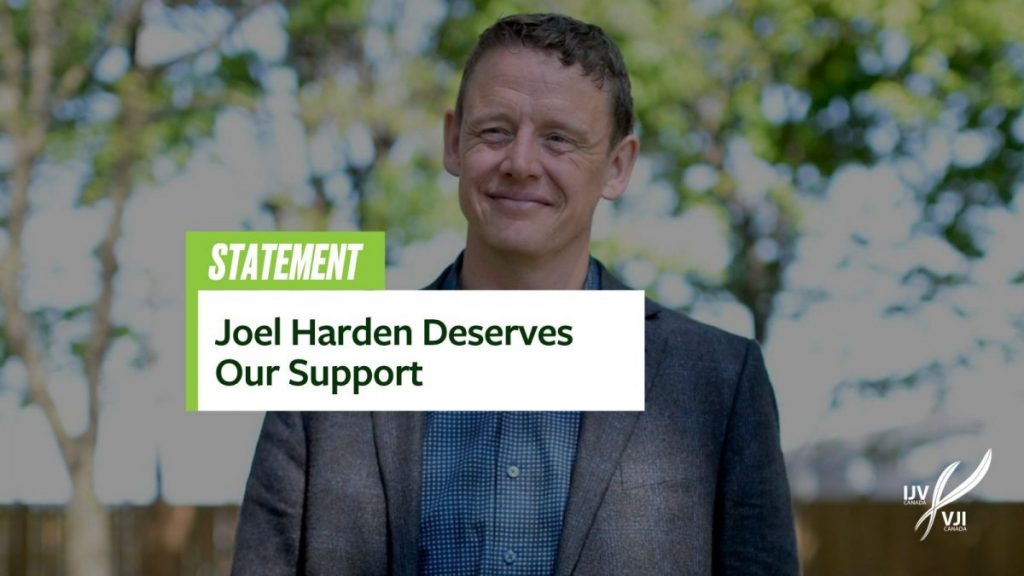 Independent Jewish Voices Canada (IJV) stands with Ontario MPP for Ottawa-Centre Joel Harden, who recently came under fire from pro-Israel lobby groups and the Jewish Federation of Ottawa for comments made regarding his advocacy for Palestine in a 2021 interview.

Harden was attacked for two quotes from his interview regarding Israel’s human rights abuses against Palestinians:

The first quote also is not antisemitic, although it can be better understood in context (which the pro-Israel groups attacking Harden right now have conveniently left out). The quote in context reads as follows:  “As a left politician–if you’re a politician that doesn’t believe in the status quo and wants to change things–it’s your obligation to have those courageous conversations that start with listening… where someone’s at, then asking questions. And I have asked many questions of Jewish neighbours here, you know, how long should we put up with this?”

Harden was talking about the need to have respectful, honest dialogue, including among people who profoundly disagree. Suggestions to the contrary that this quote implied him randomly haranguing Jews about their opinions on Israel are simply unfounded.

Joel Harden has a clear record on fighting antisemitism throughout his political career. He is also proudly a strong defender of Palestinian human rights. These two facts are not mutually exclusive, yet the same pro-Israel groups attacking Harden right now would like to lead people to believe that advocating publicly for Palestine constitutes antisemitism. This is why they’re pushing so hard for institutions and governments to adopt the divisive IHRA antisemitism definition, which equates antisemitism with criticism of Israel and support for the Palestinian cause.

Joel Harden apologized for his statements. That is his prerogative. As our recent research has shown, many Canadians who advocate for Palestine risk losing their jobs, or face harassment and intimidation. IJV Canada is concerned by the chilling effect on people like Harden who are strong allies of the Palestinian people. We call on the ONDP to recognize and fight real antisemitism wherever it occurs, and also to reject efforts to have Harden removed from caucus. The ONDP should stand with IJV and progressive Jews across Ontario in supporting Harden in the face of this harassment campaign.