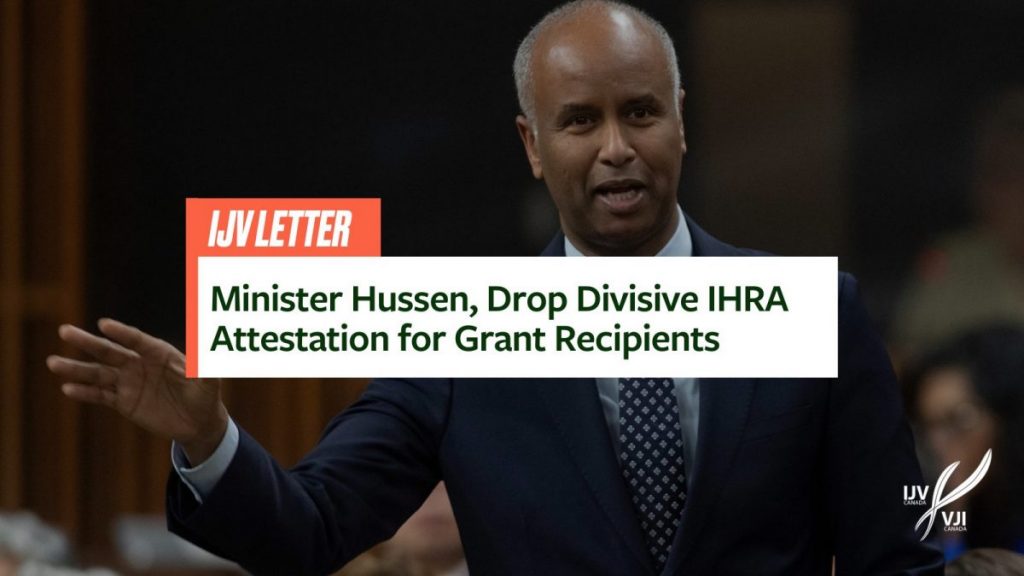 Minister of Diversity, Inclusion and Youth

I write to you today on behalf of Independent Jewish Voices, a national Jewish organization with chapters across Canada that supports a just peace in Israel-Palestine and that actively opposes all forms of racism.

Thank you for your efforts to challenge racism and bigotry in Canadian society. Being attuned to the concerns of diverse communities across the country is surely not an easy task, particularly considering there is much diversity within communities.

As you may be aware, the International Holocaust Remembrance Alliance (IHRA) working definition of antisemitism is a source of much tension and discord both amongst Jews and between Jews and members of other communities. My organization, for one, strongly opposes the adoption and application of the IHRA definition, and is joined by many other Jewish and non-Jewish organizations in doing so. A shortlist of such organizations includes: the Canadian Association of University Teachers, Canadian Labour Congress, over 40 individual faculty associations and academic unions in Canada, The Progressive Israel Network, the Canadian Arab Institute and the Jewish Faculty Network. The definition has also been rejected by various city councils and school boards in Canada.

In June 2019, my organization launched a national No IHRA campaign, shortly before it was unfortunately included by your government within Canada’s Anti-Racism Strategy. In our view, the IHRA definition does much more to stoke the flames and excuse racism, than it does to fight it. For instance, example #9 included in the IHRA definition–”Denying the Jewish people their right to self-determination, e.g., by claiming that the existence of a State of Israel is a racist endeavor”–is frequenty interpreted to mean that accusing Israel of apartheid and/or advocating for equal rights for Palestinians is antisemitic. By this measure, Amnesty International, Human Rights Watch, Israel’s B’Tselem, virtually all Palestinians and a growing number of Jews like myself would be considered antisemitic. I hope and trust you do not believe that to be the case and can envisage the political, social and legal ramifications of putting this definition into practice. IJV has been tracking examples of how the IHRA definition has already been used to shut down legitimate criticism of Israel and solidarity with Palestinians both in Canada and elsewhere, which you can find here.

I understand that you now intend to include acceptance of the IHRA definition in Canada’s Anti-Racism Strategy as part of an attestation required of organizations that receive grants from Canadian Heritage. As an organization that takes antiracism seriously, and for whom antisemitism is an ongoing battle, we appreciate the efforts to hold organizations to account based on antiracist principles. Our fear, however, is that requiring adherence to the IHRA definition on the part of grant recipients will foster a chilling and punitive effect among Canadians, most notably members of the Palestinian, Arab and Muslim communities, not to mention others engaged in human rights and antiracism work.

We therefore implore you to reconsider your approach such that whatever standards Canadian organizations are asked to comply with are consistent with antiracist principles and do not themselves cause harm and reinforce other forms of racism.

To understand the harm that has already been generated by anti-Palestinian groups in this country, I invite you and your staff to read IJV’s explosive report, launched yesterday: Unveiling the Chilly Climate: The Suppression of Speech on Palestine in Canada. The report is the first of its kind anywhere in the world, utilizing rigorous research to describe both the overarching effects of this repression as well as the deeply personal impact it has had on students, academics, artists and advocates. I also encourage you and your team to take heed of the recent report by the Arab Canadian Lawyers Association, Anti-Palestinian Racism: Naming, Framing and Manifestations, which identifies the IHRA definition as a major source of hostility, bigotry and repression for that community and those associated with it.

I trust you agree that we cannot fight racism with racism and that the struggle against one form of bigotry should not take precedence over others. Furthermore, there are other, better definitions of antisemitism out there–including the Jerusalem Declaration on Antisemitism, proposed as an urgent corrective to IHRA by over 400 of the world’s most respected scholars of antisemitism, the Holocaust and the Middle East. My organization also proposes a definition as well as a set of 5 core principles to dismantling antisemitism.

I would appreciate the opportunity to meet with you and/or members of your team about this matter, either in person in Ottawa or virtually, so that we can discuss it in greater detail. Please let me know a time that is suitable for you.